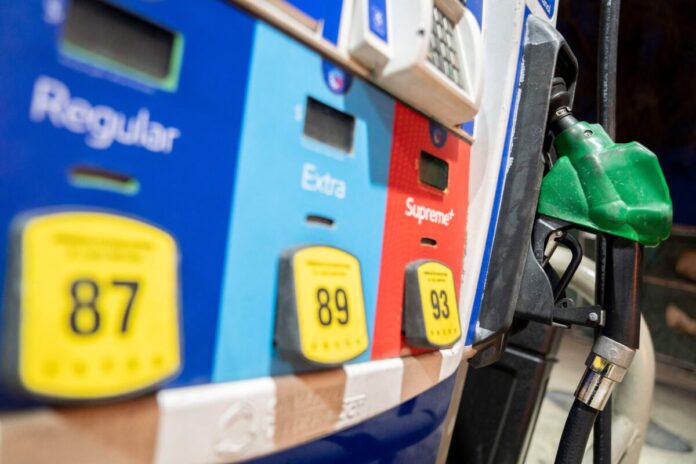 If national average gasoline prices remain above $4 per gallon, Americans could receive monthly payments of $100, according to a federal bill recently introduced by a Democratic lawmaker.

Rep. Mike Thomas (D-Calif.) submitted legislation to provide “energy rebates to individual taxpayers” in response to surging gas prices. Rep. John Larson (D-Conn.) and Rep. Lauren Underwood (D-Ill.) lent their support to the proposal that also includes monthly relief of $200 for couples and an additional $100 for each dependent.

The structure of the stimulus checks would be similar to the plethora of payments made since the beginning of the coronavirus pandemic, meaning that it would phase out for individuals earning more than $80,000 a year or couples making more than $150,000 per year.

“Americans are feeling the impact at the pump of Vladimir Putin’s illegal invasion of Ukraine, and right now we must work together on common sense policy solutions to ease the financial burden that my constituents are feeling,” said Thompson in a statement.

“The Putin Price Hike is putting strain on our economy, and I am proud to be working with Reps. Larson and Underwood to introduce this legislation to provide middle-class Americans with monthly payments to ease the financial burden of this global crises.”

Other Democrats have considered additional measures to alleviate higher prices consumers are facing at gasoline stations across the country.

Sen. Sheldon Whitehouse (D-R.I.) and Rep. Ro Khanna (D-Calif.) suggested a quarterly rebate to consumers, with payments being supported by a tax applied on oil and gas companies.

Called the Big Oil Windfall Profits Tax, the mechanism would consist of a per-barrel levy equal to 50 percent of the difference between the current price of a barrel of oil and its pre-pandemic average price between 2015 and 2019.

If a barrel of oil costs $120, the tax will raise approximately $45 billion per year, they project. This would give single filers an annual rebate of $240 and joint filers $360.

“As Russia’s invasion of Ukraine sends gas prices soaring, fossil fuel companies are raking in record profits. These companies have made billions and used the profits to enrich their own shareholders while average Americans are hurting at the pump,” Khanna said in the statement.

Rep. Peter DeFazio (D-Ore.) put forward a third plan: a rebate based on profits from oil companies. The congressman noted that the numbers are not precise because his Stop Gas Price Gouging Tax and Rebate Act would involve taxes on this year’s profits from energy companies.

“Big Oil is foaming at the mouth,” he said in a news release. “After price-gouging Americans in 2021 to make record profits, Big Oil is now reaping the benefits of Putin’s price hike.”

This comes as The Washington Post reported last week that the White House is considering direct payments to motorists through the Internal Revenue Service. The Biden administration is also weighing a federal gas tax holiday, another release of oil from the Strategic Petroleum Reserve (SPR), and incentives to encourage U.S. oil and gas companies to raise output.

At the state level, leaders are discussing proposals to offer relief from higher gas prices and broader inflation effects.

In California, Gov. Gavin Newsom and other policymakers are deliberating a few policies to alleviate the situation. One of these includes a $9 billion plan that would send $400 direct payments to motorists for up to two vehicles per person.

Maine is mulling over a stimulus check of $850 to most residents as part of the state’s budget. New Mexico is considering a $250 rebate for residents. Minnesota Gov. Tim Walz is considering income tax rebate checks of $1,000 per couple.

Critics purport that some of these ideas will add to inflationary pressures.

“If reports are accurate, the WH considered having the IRS mail people gas cards—yet another round of stimulus,” posted Sen. John Thune (R-S.D.) on Twitter. “Dumping money into the economy like that is exactly what got us into this inflation crisis in the first place. We need real solutions.”

The Committee for a Responsible Federal Budget (CRFB) came out against one specific policy last month: suspending the 18.3-cent federal gas tax for the rest of 2022, arguing that it would benefit producers and trigger higher prices in other sectors of the economy.

“By boosting demand in an already over-stimulated economy, the holiday would likely boost inflation in 2023 once it ends. The holiday will also undercut the administration’s efforts to address climate change,” explained Maya MacGuineas, CRFB president, in a statement.

“The pain Americans are feeling at the gas pump—and with rising costs throughout the economy—should be taken seriously and addressed thoughtfully. While cutting the gas tax may have political appeal, it would move in exactly the wrong direction, worsening rather than improving our nation’s economic challenges.”

Some economists and financial experts have endorsed employing fiscal tools to help drivers.

Earlier this month, Ian Shepherdson, chief economist at Pantheon Macroeconomics, recommended $50 billion in gas price relief to low- and middle-income households. He added that this would not contribute to higher inflation since these outlays would account for just 0.2 percent of U.S. GDP.

Stuart Hoffman, a senior economic adviser at PNC, called it a “great idea.”

“There will be fierce resistance from the anti-fossil fuel activists, and the enormity of deficits is starting to sink in. But this is an election year, and consumers have been stunned by gasoline prices—a perfect storm, in our opinion, for rebates or vouchers,” Valliere wrote in a research note.

The national average for a gallon of gasoline edged up to $4.246 on Monday, according to the American Automobile Association (AAA). This is up 17 percent from the same time a year ago.

“The global oil market reflects the volatility caused by the war in Ukraine grinding onward,” said Andrew Gross, AAA spokesperson, in a report. “And with oil prices refusing to fall, the price at the pump is likewise meeting resistance at dropping further.”

A new survey from GoBankingRates learned that more than half of Americans are driving less.

A Yardeni Research note estimated this month that intensifying pressure at the pump would result in an extra $2,000 a year in gasoline spending for the typical U.S. household. This is in addition to roughly $1,000 in additional costs at the supermarket.