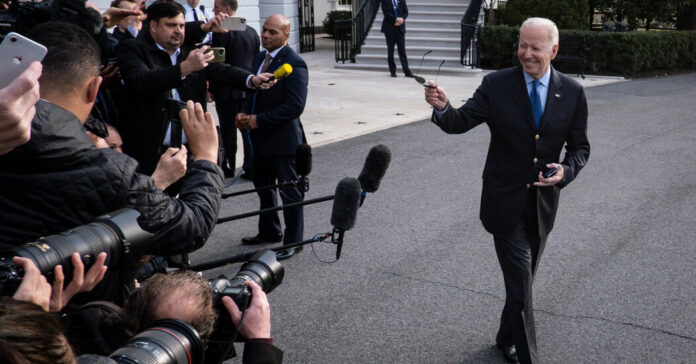 With his party facing potentially gale-force headwinds in the midterm elections, President Biden’s budget tacks toward the political center, bowing to the realities facing endangered Democrats by bolstering defense and law enforcement spending and tackling inflation and deficit reduction in service of what he called a “bipartisan unity agenda.”

Under the plan, the left wing’s hopes for a peace dividend at the end of wars in Iraq and Afghanistan would be scotched in favor of a new Great Powers military budget that would bring the Defense Department’s allocation to $773 billion, an increase of nearly 10 percent over the level for fiscal 2021. Rather than cuts, Mr. Biden pledges to bolster the nation’s nuclear weapons program, including all three legs of the nuclear “triad”: bombers, land-based intercontinental missiles and submarines.

“We are at the beginning of a decisive decade that will determine the future strategic competition with China, the trajectory of the climate crisis, and whether the rules governing technology, trade and international economics enshrine or violate our democratic values,” the budget states, justifying large increases to project U.S. military and diplomatic strength globally.

Far from defunding the police and abolishing Immigration and Customs Enforcement, two popular slogans on the left, the budget robustly funds both. Customs and Border Protection would receive $15.3 billion, ICE $8.1 billion, including $309 million for border security technology — a well-funded effort to stop illegal migration. The nation’s two primary immigration law enforcement agencies would see increases of around 13 percent.

The budget even includes $19 million for border fencing and other infrastructure.

Federal law enforcement would receive $17.4 billion, a jump of nearly 11 percent, or $1.7 billion over 2021 levels. And the president, acknowledging widespread concerns that are driving Republican attacks against Democrats, vows to tackle the rise in violent crime.

The proposals track with some of the main attack lines Republicans are using against Democrats in the run-up to the November contests, as they portray Mr. Biden and his allies in Congress as weak on security, soft on crime and profligate with federal spending to the point of damaging the economy.

Liberal Democrats would see some of their priorities addressed, including “through substantial funding for climate programs and “environmental justice” initiatives, as well as changes to incarceration policy. But many on the left will be disappointed. In lieu of broad student debt forgiveness, an executive order that many Democrats have been pressing for since Mr. Biden’s inauguration, the Education Department’s student lending services would receive a huge increase, 43 percent, to $2.7 billion.

Swing-district Democrats who have been pressing Mr. Biden to address widespread concerns about rising prices would be able to point to a number of programs to combat inflation, the biggest issue weighing down their prospects. The president promises large-scale efforts to unclot supply-chain bottlenecks that are raising costs and large-scale deficit reduction that could cool the economy.