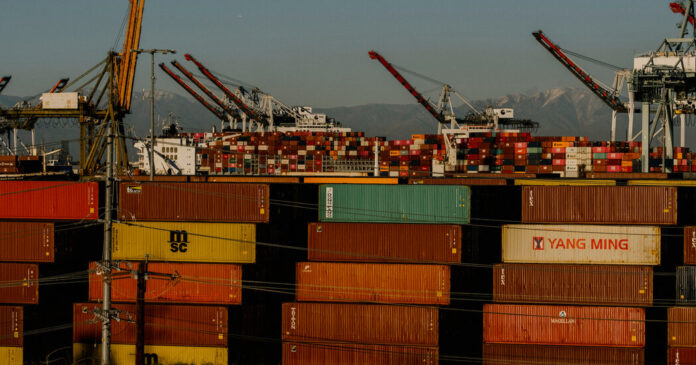 Soaring consumer prices are undermining President Biden’s economic approval ratings, making inflation a critical topic for the White House headed into midterm elections — and making fighting it a focus of the administration’s budget, even though the Federal Reserve plays the primary role in countering rapid price increases.

Mr. Biden’s administration, in its budget proposal released Monday, emphasized that some of the investments it is making or proposing could lower costs for families.

The budget document — which mentions the word “costs” 47 times and “inflation” six — earmarks funding for port infrastructure development, money to improve the passenger and freight railway system, and funds to help with financing the construction and rehabilitation of inexpensive housing stock, among other measures that might help to improve supply in the economy over time.

Presidential budgets are an outline of an administration’s priorities rather than policies that are actually enacted in full. By repeatedly referencing plans to cut costs for families, Mr. Biden is making it clear that the concern ranks high on his list.

But there is not much the White House can do quickly to ease rapid price increases, which have been running at the fastest pace in 40 years. Supply chain fixes could take years to pay off. In the meantime, fighting inflation is primarily the job of the Fed.

The central bank raised interest rates for the first time since late 2018 earlier this month, and officials have forecast that they will continue to increase borrowing costs over the course of this year and next. Doing so will make financing big purchases more expensive in a bid to cool off demand, slow down the economy and temper price increases.

The Fed’s preferred inflation measure is expected to show that prices climbed by 6.4 percent in the year through February, based on estimates from a Bloomberg survey, when it is released later this week. Central bankers aim for 2 percent inflation, so that is more than three times their goal. Fed policymakers are hoping that their policy changes, paired with further supply chain and labor market healing, will help them to return annual inflation to 4.3 percent by the end of the year.

As inflation has accelerated over the past year, it has become a big part of the nation’s consciousness. Mr. Biden’s economic approval ratings have fallen sharply, based on the results of an NBC News poll earlier this month, and cost of living is voters’ top concern.

Angst over high prices is also becoming palpable in daily life. A cryptocurrency advertisement that leads with the line “Frustrated by high inflation?” hangs over a security checkpoint at Newark Liberty International Airport. Saturday Night Live included a joke about rising fuel costs earlier this month (“Girl, I know Biden better do something about these gas prices,” Ego Nwodim commiserated with Zoë Kravitz at the start of a skit).

That creates a challenge for the White House, which can do only so much in the face of higher prices. Russia’s invasion of Ukraine has sent fuel prices sharply higher, something neither the administration nor the Fed can immediately or fully counteract. When it comes to broader, economy wide pressures, curbing demand is most likely to be the faster way to slow down price increases — but the Fed’s policy changes work by slowing down the job market, which is unlikely to make voters feel much better.

Much of the world has experienced a burst of inflation in the wake of initial pandemic lockdowns, as factory shutdowns and a shift in buying away from services and toward goods — think couches, cars — choked supply chains and prompted shortages.

“America was not immune to the worldwide inflation that has followed the pandemic,” Mr. Biden said in his statement at the start of the budget documents, also blaming rising prices partly on Russia’s invasion of Ukraine, given that the conflict has pushed up gas costs.

But America’s price burst has been especially pronounced, even compared to global peers. Many economists attribute that, at least in part, to the country’s spending in response to the pandemic. America spent a lot during the pandemic, including on packages passed during the Trump administration and the $1.9 trillion Mr. Biden and congressional Democrats passed in early 2021.

That final package came at a time when growth and the labor market were recovering, and some economists warned that it was too large and poorly-targeted and would lead to overheating.