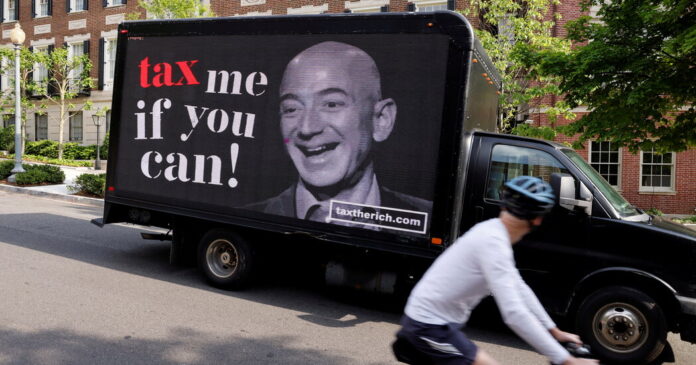 President Biden on Monday proposed raising taxes on the wealthiest Americans and corporations, outlining several initiatives in his 2023 budget aimed at bringing down the federal budget deficit and closing loopholes that allow the rich to lower their tax bills.

The proposals revive elements of Mr. Biden’s economic agenda that have struggled to gain traction in Congress over the last year, including reversing major components of the 2017 tax law that was passed by Republicans and promoting what Mr. Biden has called economic fairness.

The budget calls for a new tax on American households worth more than $100 million, which would require that they pay a rate of at least 20 percent on their income as well as unrealized gains in the value of their liquid assets, such as stocks, which can accumulate value for years but are taxed only when they are sold.

The “Billionaire Minimum Income Tax” would apply only to the top one-hundredth of 1 percent of American households, and over half of the revenue would come from those worth more than $1 billion. The proposal focuses on taxing unrealized capital gains that are built up over years but are taxed only when sold for a profit. The White House estimates that the new tax would raise about $360 billion in revenue over a decade.

White House officials said the proposal would eliminate loopholes and tax planning strategies that the rich have employed for years to keep their federal tax bills lower than those of many middle-income Americans. It would apply only to those who do not already pay a tax rate of at least 20 percent on their income and unrealized gains. Those who pay below that level would have to pay the difference between their current tax rate and the new 20 percent rate.

Democrats in Congress have considered a variety of different tax proposals that would target the wealthiest Americans, including surtaxes and wealth taxes that sweep in gains from a wide assortment of assets.

The Biden administration emphasized that the proposal is different from the wealth taxes that Democrats such as Senator Elizabeth Warren of Massachusetts have proposed in the past that would impose annual levies on an individual’s accumulated assets. However, the billionaire tax that Mr. Biden is proposing could still face legal challenges, as taxes on unrealized capital gains are different from the income taxes allowed by the 16th Amendment.

The tax idea drew criticism from some conservative groups who argued that it would deter investment.

“Under Biden’s tax proposal, wealthy people would be rewarded for consumption and penalized for reinvesting to grow their businesses,” said Chris Edwards, director of tax policy studies at the Cato Institute. “Patience and prudence would be punished. The Biden plan would particularly harm leading edge industries that rely on wealthy investors to take the large risks that drive American innovation.”

The White House’s budget also calls for other tax increases on the rich. It would raise the top individual income tax rate to 39.6 percent from 37 percent, reversing the 2017 tax cut ushered in by President Donald J. Trump. A White House official noted that it was the same top rate that was in place during the Obama administration. The rate would apply to unmarried individual taxpayers with income of $400,000 or more and married individuals with income of $450,000 or more, a Treasury official said.

The call to increase in the corporate tax rate drew criticism from the retail industry on Monday.

“Leading retailers are extremely disappointed to see a tax plan from the president that revives earlier failed plans to raise the corporate tax rate to 28 percent,” said Hana Greenberg, vice president of tax at the Retail Industry Leaders Association. “Practically, this tax increase would disproportionally punish retailers who already pay their full freight in corporate taxes.”

All told, the tax proposals amount to a $2.5 trillion tax increase over a decade.

It is unclear whether any of the proposals will be able to gain enough support in Congress to become law. Previous efforts to raise taxes on the wealthy and corporations have run into resistance from moderate Democrats, including Senators Joe Manchin III of West Virginia and Kyrsten Sinema of Arizona.