Japan Approves Budget to Host US Military Amid Stronger Cooperation 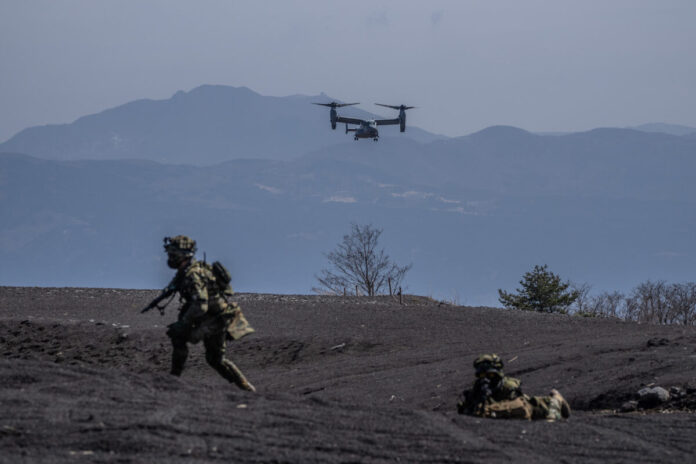 Japan’s parliament on Friday approved a new agreement with the United States to spend 1 trillion yen ($8 billion) over five years to host U.S. troops, as both countries seek to bolster military cooperation amid threats from China and North Korea.

Under the agreement, Japan will spend 1.05 trillion yen through March 2027 on the advanced arsenals used in joint military exercises, and on expenses to run facilities used by the U.S. forces and the Japanese employees working on American bases in the country.

The budget also includes a new funding category of up to 20 billion yen ($164 million) for the acquisition of advanced virtual combat training systems that will be used for joint exercises between their military forces.

The United States has stationed about 54,000 troops in Japan under the 1960 Japan-U.S. security treaty. Japan’s government now describes the host-nation support budget as necessary for strengthening the alliance, rather than for “kindness” as it used to be considered.

The country has ramped up its joint exercises with the United States and other allies, including Australia, Britain, India, France, and Germany, in response to North Korea’s series of ballistic missile launches and China’s increased military assertiveness in the region.

Japan and the United States strongly condemned North Korea’s intercontinental ballistic missile test on March 24, which is deemed to be Pyongyang’s biggest-ever missile capable of striking anywhere in the United States and beyond.

Japan said that the missile landed about 93 miles (150 kilometers) west of the Oshima Peninsula within its exclusive economic zone, Kyodo News reported.

U.S. President Joe Biden met with Japan’s Prime Minister Fumio Kishida at the Group of Seven summit in Brussels on Thursday, during which they discussed North Korea’s long-range ballistic missile launch, according to the White House.

.@POTUS met with Prime Minister Kishida of Japan at the G7. They discussed North Korea’s launch of a long-range ballistic missile, which both leaders strongly condemned, stressed the need for diplomacy, and agreed to continue working together to hold the DPRK accountable. pic.twitter.com/lhgsGree6P

“Both leaders strongly condemned, stressed the need for diplomacy, and agreed to continue working together to hold the DPRK accountable,” the White House said in a tweet, using the official acronym for North Korea.

The two leaders have previously vowed to “push back against China’s attempts to alter the status quo in the South China Sea, where China has been ramping up military presence, and the East China Sea, where the Japanese-controlled Senkaku islands are located.

The Senkaku Islands in the East China Sea have mostly been administered by Japan since 1895, but Beijing began asserting its rights over the islands in the 1970s. In China, the islands are called the Diaoyu Islands.

The White House said on Jan. 21 that Biden has reaffirmed “the United States’ unwavering commitment to the defense of Japan, using its full range of capabilities,” including the application of the 1960 Japan-U.S. security treaty.