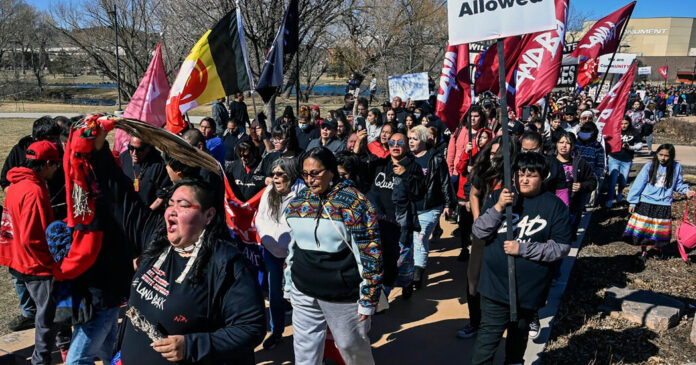 A recent social media post by a hotel owner in Rapid City, S.D., announcing that Native Americans would be barred from the business after a shooting in one of the hotel’s rooms has prompted swift condemnation from community leaders, a protest and a federal civil rights lawsuit.

The owner, Connie Uhre, was upset about an attack at the 132-room Grand Gateway Hotel early on March 19 in which the gunman and victim were both Native American. She also voiced more general concerns about what she described as increasing crime in the city.

“We will no longer allow any Native American on property,” Ms. Uhre, 76, wrote on Facebook on March 20. “Or in Cheers Sports Bar,” she said, referring to the on-site lounge where karaoke takes place six days a week. “Natives killing Natives.”

Race relations in Rapid City have long been a powder keg, one Sioux City-based commentator wrote in The South Dakota Standard, and Ms. Uhre last weekend “lit the match.”

The post, Native Americans and others said in interviews, was a blatant example of racism that stuck out from the myriad subtle and systemic kinds that Indigenous people face every day.

Nick Tilsen, the president of the NDN Collective, an activist group based in Rapid City that is an advocate for Indigenous causes, said he was shocked when he first saw the comments by Ms. Uhre.

“I was like, ‘Is this the 1960s in Montgomery or Birmingham, Ala.?’” he said, referring to sites of virulent racism during the civil rights era. “What is this?”

The NDN Collective filed a federal civil rights lawsuit on Wednesday in U.S. District Court in the state’s Western Division. The proposed class-action suit contends that Native Americans, including members of the NDN Collective, tried on two days after the social-media post to rent rooms at the hotel but were denied. The hotel’s actions are “part of a policy, pattern, or practice of intentional racial discrimination against Native Americans,” the suit contends.

On the same day the lawsuit was filed, hundreds of community members and activists marched from a park to the federal courthouse in downtown Rapid City, where the NDN Collective held a rally and news conference.

Ms. Uhre declined to comment about the lawsuit. Her son, Nicholas Uhre, said on Thursday that the hotel had never had a policy prohibiting Native Americans from renting a room. The comments by his mother, he said, were “stupid” and made “in an emotional state” when she was distraught over the shooting.

The police say a 19-year-old man was arrested on suspicion of aggravated assault and the commission of a felony with a firearm in connection with the shooting at the hotel on March 19. Late Thursday, a police spokesman said that the victim, a young man, “was fighting for his life in the hospital.”

“Somebody took a stupid post by a 76-year-old lady and they’re using it for political purposes.” he said.

“We rent to Native Americans all day long,” he said. “We do not discriminate. We never have, we never will.”

He called the attempts by members of the NDN Collective this week to rent rooms “a stunt.” “If somebody is up there to cause problems,” he said, “we’re not going to rent them a room.”

Mr. Tilsen, a member of the Oglala Lakota tribe, said the attempts to get rooms were sincere. “We went up there to get rooms like we have throughout this town all the time,” he said. “And they denied Native American people rooms.”

Mayor Steve Allender, a Republican, said statements like Ms. Uhre’s pit communities against each other and are harmful not just to Native Americans but also to the city’s businesses and broader community.

“I condemn these statements in the strongest possible terms,” Mr. Allender said in a statement. “They do not represent Rapid City and its people, nor do they represent America.”

He added, “I am calling on the Uhre family to publicly address and denounce these statements and begin making amends to the community, most especially the Native American people.”

The flap over the comments also made the local police push back against claims that crime was out of control in Rapid City, a city of about 75,000 whose nearby attractions include Mount Rushmore.

Around the time of the coronavirus pandemic, “we did see an increase in certain types of crime,” said Brendyn Medina, a spokesman for the Rapid City Police Department, “but that’s reflective of the country as a whole. So there’s nothing really specific to Rapid City and Pennington County that we’re observing.”

He noted that calls for service at the hotel and surrounding area decreased by about 10 percent in 2021 compared with the previous year.