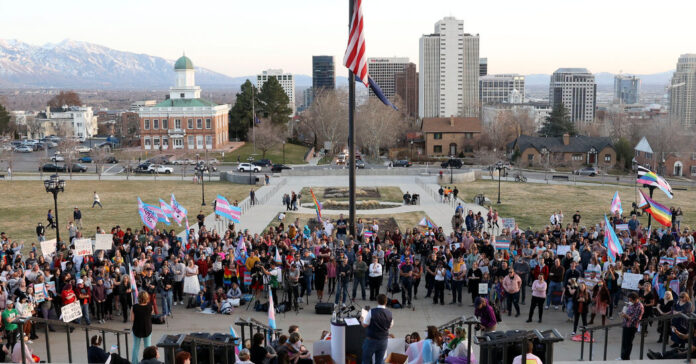 The Utah State Legislature voted on Friday to override the governor’s veto and enacted a bill that would bar young transgender athletes from participating in girls’ sports, making the state the 12th in the country to enact such legislation.

The new law, which is known as H.B. 11, will most likely be challenged in court, legislators said. If a lawsuit occurs, the measure would trigger a commission of experts who would determine eligibility in individual cases and evaluate students’ physical characteristics such as height, weight and wingspan, the legislation states. The law takes effect on July 1.

Most Republicans in the Legislature who voted for the override said they were concerned about fairness in girls’ sports, while Democrats who voted against it argued that transgender youth would feel unnecessarily targeted and that their mental health would suffer.

Gov. Spencer Cox, a Republican in his first term who is up for re-election in 2024, faced political pushback from his party when he denounced the bill this month after it was passed at the last-minute by Republican state senators. He said in a letter explaining his veto on Wednesday that he was concerned an outright ban would place the lives of transgender children at risk and believed the bill had not been sufficiently discussed.

“Rarely has so much fear and anger been directed at so few,” he said of the four transgender children playing high school sports in Utah out of about 85,000 student-athletes.

Supporters of the measure, however, say that number will increase.

State Senator Daniel McCay, who introduced the proposed ban and defended it on the floor of the state senate, said in an interview that it was unfair for transgender girls to play in girls’ sports and that it was “time to move on” from the issue, which had been debated in the State Legislature for more than three years.

Eleven other states have enacted similar laws in recent years as sports participation by transgender girls and women becomes an increasingly divisive topic among political leaders and athletic organizations.

On Monday, Gov. Eric Holcomb of Indiana, a Republican, vetoed a similar bill, saying it would have most likely been challenged in court and would not have solved any pressing issue. Republican lawmakers are expected to override his veto, too.

On Being Transgender in America

The Arizona Legislature passed a bill on Thursday that would prevent transgender students from participating on girls’ sports teams. Gov. Doug Ducey, a Republican, has not said whether he would sign it, and his office did not immediately respond to a request for comment on Friday.

Mr. Cox appeared to be aware of the political risk he was taking with his veto, writing that while “it would be much easier and better for me to simply sign the bill,” he made his decision because he “tried to do what I feel is the right thing regardless of the consequences.”

“I want them to live,” he said of transgender student-athletes, adding that their mental health could be worsened by the bill and could increase their risk of dying by suicide.

Those factors included a fear that anti-transgender legislation was bad for attracting and retaining businesses, Mr. Cox’s own history of being sensitive to L.G.B.T.Q. concerns and a frustration with lawmakers in his own party who he felt had blindsided him in passing the legislation.

Republican senators and house members, who hold a supermajority in both chambers, met virtually on Monday and determined that they could muster the two-thirds threshold needed for an override, Mr. McCay said.

Troy Williams, the executive director for Equality Utah, an L.G.B.T.Q. rights organization, was involved with the bill’s negotiations and had advocated allowing transgender youth to participate in girls’ sports. He said he had heard from Republican senators that if they did not vote for the ban, “they would lose their race” in upcoming elections.

Mr. Williams described the ban as cruel, discriminatory and an attempt by Republican legislators to drive up support on a culture war issue as they contend with challengers in their party primaries.

State Senator Daniel W. Thatcher, a Republican who voted against the bill, said on Friday that he considered voting in favor of an override in order to improve his stance at an upcoming Republican state convention. But he decided on Friday to vote against the override, saying the bill was flawed and would hurt the transgender community.

“If I lose my race, then I lost my race standing for what I believe in — like I always have,” Mr. Thatcher said.

State Representative Kera Birkeland, a Republican and chief sponsor of the bill who also coaches girls’ basketball, said that she had initially been open to compromises but decided that a ban was the best solution because it would “preserve the integrity of women’s sports.”

Sue Robbins, who serves on Equality Utah’s transgender advisory council, said she was “disappointed” in her legislators.

“They decided to just stop talking and put a ban in place because it was too much work for them,” Ms. Robbins said. “And I just don’t think that’s good governance.”