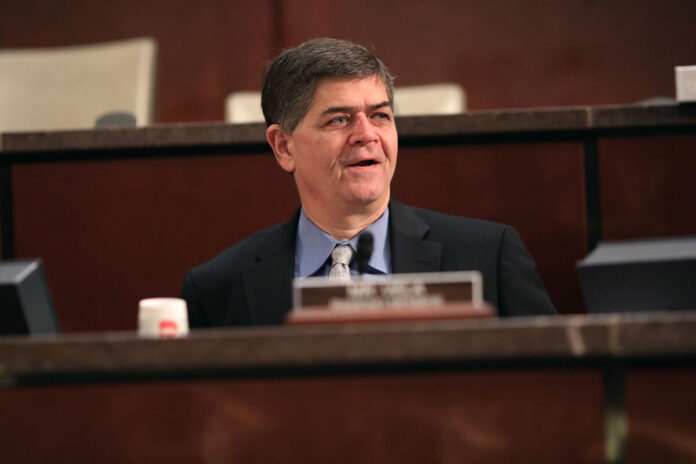 Rep. Filemon Vela (D-Texas) will resign from Congress in just a few weeks to take a job with a major lobbying firm.

Vela, who was first elected to Texas’ 34th congressional district in 2012, will take a lobbying job with Akin Gump, the largest lobbying firm in the United States.

Vela has been planning to leave Congress for some time. In January, he filed papers with the House Ethics Committee recusing himself from all matters related to Akin Gump.

Though Vela’s impending retirement has been long in coming, the swiftness with which he’s leaving office left some would-be opponents frustrated, and Vela was accused of “bailing on his constituents.”

After his announcement became official Marya Flores, a GOP contender for the seat, posted photos to Twitter showing that Vela’s office was not accepting visitors.

“Welcome to the Office of Congressman Filemon Vela! At the moment, we are not accepting visitors,” said the letter, attached to Vela’s door.

Commenting on the photo, Flores said “[Vela] makes it a formality that he’s bailing on his constituents. His office is closed anyway.”

Once Vela leaves, the seat will be up for grabs in a special election, and Flores said that she will be a challenger in the upcoming battle.

In a statement, Flores said, “Filemon Vela is abandoning us while we have a crisis on our border and families can’t afford groceries and gas because prices are so high.

“I will never abandon our community and will absolutely be a candidate in any special election for Texas’ 34th District,” Flores added. “I look forward to flipping this seat and bringing our conservative South Texas values of faith, family, and freedom to Washington.”

During the summer of 2020, Vela was one of nine moderate Democrats who threatened to derail President Joe Biden’s Build Back Better agenda.

Originally, Speaker of the House Nancy Pelosi (D-Calif.) planned to force a vote on the $1.2 trillion infrastructure bill and the much larger $3.5 trillion Build Back Better bill—which was later reduced to $1.85 trillion over moderate objections to the hefty price tag—at the same time.

Vela, like the other centrists in the coalition, demanded that House leadership bring the bills to the floor for independent votes, saying that it would be inappropriate to bundle the infrastructure bill, which had support from both parties, with the far more partisan Build Back Better package.

Vela’s departure will slim down Democrats’ already-thin majority in the House, where just a few defections from House Democrats can derail legislation. If Flores or another Republican candidate manages to flip the district, it will be a blow for Democrats, and will further trim their control of the House.

Both Republicans and Democrats in Texas’ 34th district held their primary elections at the beginning of March.

With Vela leaving office earlier than expected, the Texas governor will need to call a special election to fill the vacancy.

During the special election, competitors from both parties will be pooled together on a single ballot. If one candidate receives a majority of the vote, they will be elected. If there is no majority, the top two competitors will head to a runoff.

Though Flores is the presumptive GOP frontrunner, it is not yet clear who will participate in the election on the Democrat side.

Vela is the most recent in a long line of Democrat retirees.

Amid skyrocketing gas prices, supply chain shortages, and rapidly-increasing inflation, over 30 Democrats have said that they will not run in the 2022 election, including prominent figures like House Budget Chairman John Yarmuth (D-Ky.), causing some observers to expect a major GOP windfall later this year.