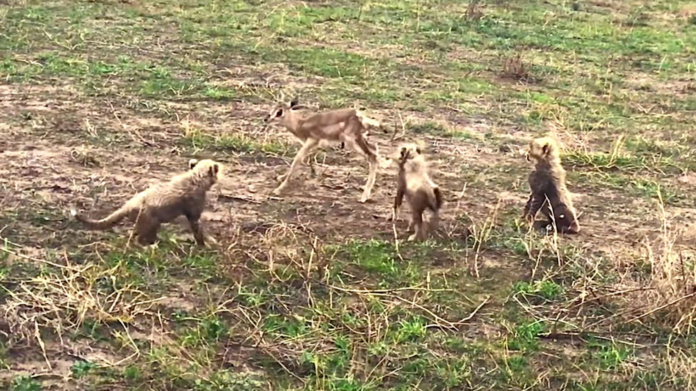 A mother cheetah encouraged her cubs to attack a pair of newborn gazelles as a hunting lesson in Tanzania’s Ngorongoro Conservation Area ― and the youngsters responded with vigor, tour guide Francis Kijazi told Latest Sightings. (Watch the video below, but please note that the scene includes a kill.)

What makes the recent moment so unusual is that the cubs are estimated to be 2 months old, far younger than the usual age to begin stalking prey.

“Cheetah cubs will start hunting from 6 months old ― their mother will let them prey on smaller animals to teach them vital hunting skills that help them refine their technique,” Sarah Oxley, project administrator for the wildlife viewing platform Latest Sightings, told HuffPost.

Kijazi said it was the first time in 12 years that he had seen such behavior from cheetahs so young.

The hunting instinct appeared particularly strong in this bunch, especially one cub that body-slammed and bit one of the newborns.

The video picks up after the mother’s encouragement. While one Grant’s gazelle appears to be under attack, there are two in the footage.

The mother cheetah eventually shows up and the hunt takes a lethal turn.