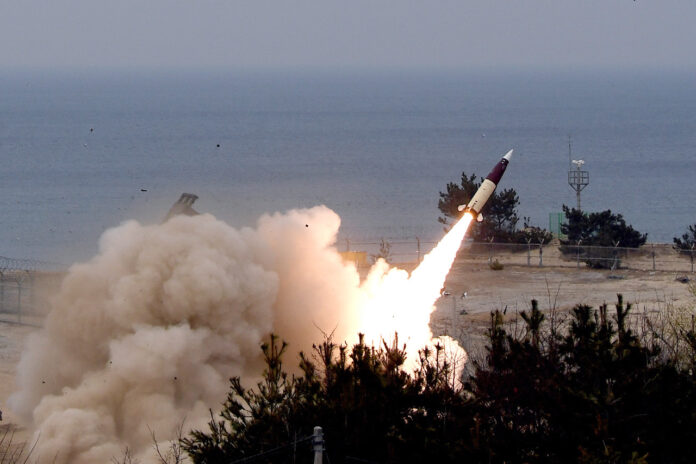 North Korea on Thursday ended a self-imposed moratorium on testing long range missiles, launching a new kind of ICBM for the first time since 2017, an act that drew condemnation worldwide.

“The missile, launched at Pyongyang International Airport, traveled up to a maximum altitude of 6,248.5 km [about 3900 miles] and flew a distance of 1,090 km [about 680 miles] for 4.052 seconds before accurately hitting the pre-set area in open waters of the East Sea of Korea,” the state-run Korea Central News Agency reported, using the North Korean name for the sea that lies between the Korean peninsula and Japan.

The missile was in the air for a longer time and at a higher maximum altitude than any missile the North has tested so far, the militaries of South Korea and Japan reported. The advanced missile could indicate that Pyongyang may eventually have the ability to hit any target in U.S. territory.

U.S. President Joe Biden and Japanese Prime Minister Fumio Kishida, during a meeting of the Group of Seven in Brussels, both condemned the launch and called for diplomacy and the need to hold Pyongyang “accountable,” the White House said in a statement. Kishida called the launch an ““unacceptable act of violence.”

South Korean President Moon Jae-in, whose administration has prioritized North Korea engagement, also condemned the action, calling it “a breach of the moratorium on ICBM launches that Chairman Kim Jong Un himself promised to the international community.”

Moon’s term will end in May with the swearing in of President-elect Yoon Suk-yeol, who recently defeated the candidate representing Moon’s Democratic Party.

Yoon’s presidential transition team in a statement said that it was necessary to “strongly deal” with Pyongyang through close cooperation with Washington and the rest of the international community.

U.S. Secretary of Defense Lloyd J. Austin III and South Korean Minister of National Defense Suh Wook said that “firm responses, including further actions from the UN Security Council, are necessary,” the U.S. Department of Defense said in a joint statement with its South Korean counterpart.

Several U.S. lawmakers on their respective chambers’ Armed Services Committees took to Twitter to urge Biden to take action on the matter.

“North Korea’s likely first ICBM test since 2017 is another example of how dangerous our world is becoming. @POTUS’s upcoming Nuclear Posture Review needs to accept the reality of these threats and endorse a strong, flexible U.S. deterrent,” said Sen. Jim Inhofe of Oklahoma, the committee’s top Republican.

Six countries including the U.S. requested that the U.N. Security Council hold an open briefing on Friday to discuss the launch, Olivia Dalton, the spokesperson for the U.S. Mission to the United Nations, said in a statement.

U.N. Secretary General António Guterres through a spokesperson said the launch was “a significant escalation of tensions in the region.

“The secretary general urges the DPRK to desist from taking any further counterproductive actions,” the spokesperson said.

Analysts told RFA’s Korean Service Thursday said that Kim Jong Un may opt for more provocations in the near future.

The April 15 birthday of Kim Jong Un’s grandfather, national founder Kim Il Sung, is a major holiday and the younger Kim, in the 10th year of his rule, might try something on that day, Sue Mi Terry, director of the Center for Korean History and Public Policy at the Washingon-based Wilson Center, told RFA.

“Potentially even a nuclear weapons test, whether on April 15th or in the coming months. So, you know, more bad news, I’m afraid, but I think this geostrategic environment is also conducive for more provocations, and we should expect more coming out of North Korea,” she said.

The launch should not surprise anyone, Joseph DeTrani, former senior adviser to the Office of the Director of National Intelligence, told RFA.

“Kim Jong Un has been saying this at the Workers’ Party Congress going over a year ago. He made it very clear that North Korea will continue to improve its nuclear and missile capabilities, and he cited very clearly that he would be working on improving upgrading missile capabilities to include a hypersonic ballistic missile or submarine launched ballistic missile, solid fuel missiles, merging them with multiple warheads on the missiles,” he said.

“I think North Korea could feel that they’ve proven to the world and to the United States and others that they have an intercontinental ballistic missile capability that can reach the whole of the United States and it reinforces Kim Jong Un’s sense of having a nuclear deterrent that touches all countries,” said DeTani, who once served as special envoy to the Six Party Talks.

The exact nature of the missile launched Thursday requires more analysis, David Maxwell, of the Foundation for Defense of Democracies, told RFA in a written statement.

“It is too early to make any definitive assessments about the type and actual capabilities of the missile. It is possible that it is an ICBM and that it very well may be able to range all of the U.S. What we do not know is if the regime has miniaturized a nuclear warhead,” Maxwell said.

“It should be clear that this is part of the regime’s hostile policy toward the U.S. This also likely supports Kim Jong Un’s political warfare strategy and blackmail diplomacy (use of increased tensions, threats, and provocations) to gain political and economic concessions. While the regime continues to build advanced military capabilities it wants to first use those capabilities to extort concessions from the US and the international community,” he said.

But these tests are necessary to prove not that Pyongyang can launch a missile, but that it can land a warhead, Cho Han-bum, a senior research fellow at the Seoul-based Korea Institute for National Unification, told RFA.

“When a warhead enters orbit at a shallower angle, the warhead rotates at high speed, and it is pared off evenly at high heat so that it can re-enter orbit and aim toward the target while maintaining its center of gravity,” said Cho.

“North Korea needs these experiments to prove they have re-entry vehicle technology. However, in the case of a high-angle trajectory launch, it’s challenging to experiment properly,” he said.