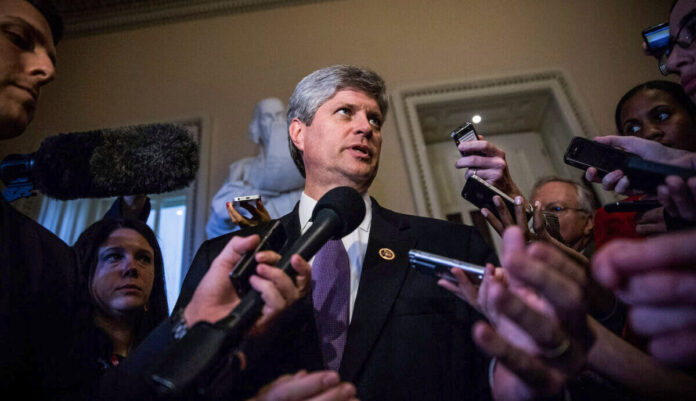 Rep. Jeff Fortenberry (R-Neb.) was found guilty on March 24 of concealing information and making false statements to federal authorities who were investigating illegal contributions to his 2016 election campaign, the Justice Department announced.

Fortenberry, who has served in Congress since 2005, was charged in October last year with one count of scheming to falsify and conceal material facts and two counts of making false statements to federal investigators looking into illegal contributions.

Each charge carries a maximum penalty of five years in federal prison, as well as fines.

The jury returned the verdicts within just hours of deliberations following a weeklong trial in Los Angeles.

“After learning of illegal contributions to his campaign, the congressman repeatedly chose to conceal the violations of federal law to protect his job, his reputation, and his close associates,” U.S. Attorney Tracy L. Wilkison said in a statement. “The lies, in this case, threatened the integrity of the American electoral system and were designed to prevent investigators from learning the true source of campaign funds.”

Fortenberry told reporters outside the courthouse that he would appeal the decision immediately, and said that he believed the trial had been unfair.

It is unclear if the GOP candidate will suspend his campaign for reelection, and he did not provide further details regarding the matter, although he did tell reporters that he plans to spend time with his family.

The lawmaker also said he had been overwhelmed with supportive messages from people.

“I’m getting so many beautiful messages from people literally all around the world, who’ve been praying for us and pulling for us,” he said outside court.

According to evidence presented during the trial, Fortenberry repeatedly lied to federal agents and misled them during an investigation into illegal contributions made to his re-election campaign by a foreign billionaire called Gilbert Chagoury in 2016.

Under federal law, a foreign national is prohibited from contributing to any U.S. elections.

Prosecutors said that Chagoury, a Lebanese-Nigerian billionaire, had arranged for $30,000 of his money to be contributed through other individuals, or “straw donors” to Fortenberry’s campaign during a fundraiser held in Los Angeles, which is also illegal.

Chagoury admitted in 2019 to funneling $180,000 in illegal campaign contributions to four different political campaigns and agreed to pay a $1.8 million fine and cooperate with federal authorities as part of a deferred prosecution agreement.

Meanwhile, the co-host of Fortenberry’s 2016 fundraiser in LA—who has not been named and is referred to in court papers as “Individual H”—also started cooperating with federal authorities in September 2016. Individual H told special agents with the FBI and IRS Criminal Investigation about the illegal contributions, according to court papers.

Investigations also focused on whether or not Fortenberry had any direct or indirect communications with Chagoury in relation to the contributions.

Prosecutors said that Fortenberry was informed by “Individual H” repeatedly that Chagoury associate Toufic Joseph Baaklini had provided $30,000 in cash to route to Fortenberry for the 2016 fundraiser through numerous individuals in an effort to avoid individual donor limits.

Despite “Individual H” telling the lawmaker that the money “probably did come from Chagoury,” Fortenberry did not file an amended report with the Federal Election Commission.

He was later interviewed by federal investigators and prosecutors where he allegedly denied having any knowledge regarding the illegal and foreign contributions to his campaign or knowing Baaklini.

He allegedly told officers that he would have been “horrified” to learn about the illegal contributions, according to court documents, and said that he had ended the June 2018 call with Individual H after they made a “concerning comment.”

Officials said he had in fact continued to ask Individual H to host another fundraiser for his campaign, court documents state.

Prosecutors said that Fortenberry “knowingly and willfully falsified, concealed, and covered up by trick, scheme, and device material facts.”

Fortenberry has denied any wrongdoing. His lawyers have argued that he was unaware of the contribution and that he may have been distracted or had a poor phone connection when he was told about the illegal contributions in the 2018 phone call.

His defense team also argued that agents directed an informant to feed him the information in a 10-minute call to set him up.

The Epoch Times has contacted Fortenberry’s attorney for comment.

Fortenberry stepped down from his role as a ranking member on the House Agriculture Appropriations Subcommittee following his indictment in October, in accordance with GOP conference rules.