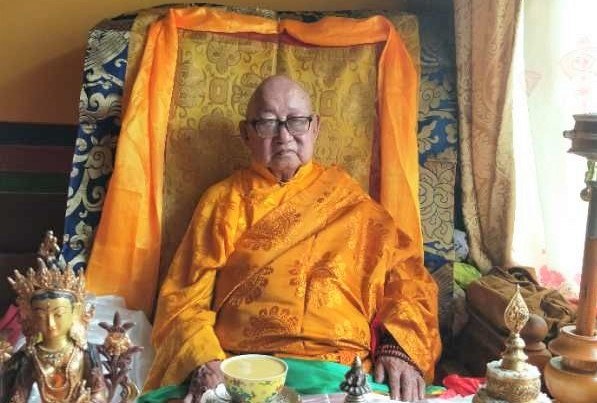 Funeral observances for a popular Tibetan lama were blocked early this year by Chinese police who barred devotees from attending and deleted images of the religious leader that were shared online, RFA has learned.

Choktrul Dawa Rinpoche, 86, died on Jan. 30 at his residence in the Tibetan capital Lhasa and immediately entered a state called thukdam, in which an accomplished meditator’s consciousness is believed to remain in the body for a period of time, a source in Tibet told RFA this week.

“But the Chinese government tried to keep Rinpoche’s demise as secret as possible, and warned people not to share news of his death online,” RFA’s source said, speaking on condition of anonymity for security reasons.

“Also, pictures and videos of Rinpoche already published online were quickly deleted by the Chinese government,” he added.

A senior teacher at the Ganden Dargyeling monastery in Nagchu (in Chinese, Naqu) county in the Tibet Autonomous Region, Choktrul Dawa Rinpoche was sentenced in 2010 to seven years in prison for discussing affairs at his monastery with Tibetan spiritual leader the Dalai Lama, now living in exile in India.

“And following his release, he was kept under constant scrutiny by Chinese authorities for the rest of his life,” the source said.

When Rinpoche’s thukdam ended on Jan. 13, Chinese security officers were sent to guard his residence and barred devotees from paying their respects, only allowing residents of Lhasa to enter the house, according to the source.

“Then, after numerous appeals from Rinpoche’s students, the Chinese government allowed his body to be moved from Lhasa to the Ganden Dargyeling monastery in Nagchu on Jan. 18. However, only two vehicles were allowed to escort him there.”

“And later only a few Tibetans were permitted to pay their respects, which led to a brief commotion between the Tibetan devotees and the Chinese police,” the source said. Only monks from Rinpoche’s own monastery were permitted to attend his cremation on Jan. 25, and were searched for cell phones before the ceremony to ensure no photos were taken, he added.

Born in Nagchu in 1937, Choktrul Dawa Rinpoche had earlier served five years in prison after being sentenced in 1960 for opposing China’s occupation of Tibet, and was jailed again for seven years during China’s Cultural Revolution (1966-1976).

Tibet was invaded and incorporated into China by force 70 years ago, and Tibetans living in Tibet frequently complain of discrimination and human rights abuses by Chinese authorities and policies they say are aimed at eradicating their national and cultural identity.