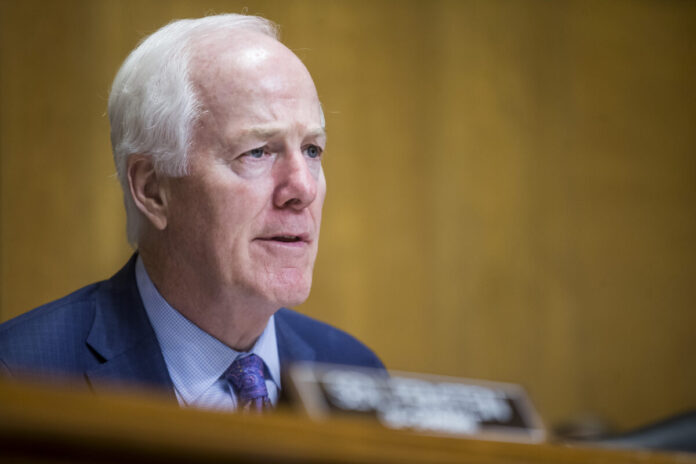 Concerns about the Supreme Court’s use of unenumerated rights to “transform society” were voiced by Senator John Cornyn (R-Texas), on the final day of questioning at the Senate Judicial Hearings in Washington D.C. on March 24.

Unenumerated rights are those not specifically mentioned in the Constitution.

Cornyn, a former trial judge and member of the Texas Supreme Court, used the bulk of his time with the Democratic nominee Ketanji Brown Jackson, to underscore U.S. Supreme Court legal philosophies and doctrines that he said bypass state legislators.

Embedded in Cornyn’s discourse was the thought that the Supreme Court of the United States was losing credibility with what he called “ordinary folks” wondering, “Who do these people think they are and where does this authority come from?”

Cornyn also expressed concerns that average Americans who did not agree with the court’s interpretations of unenumerated rights are “labeled as bigots and accused of discrimination.”

If Jackson is elevated to the high court by the full Senate, which can be done even if every Republican Senator votes against her, the concerns of policymaking from the bench, a popular Republican talking point, will certainly be an issue for states seeking greater legislative autonomy.

Government by “we the people,” Cornyn said, is being effectively circumvented by a handful of unelected, tenured judges instead of being decided by duly elected representatives empowered by citizens of the United States.

He wanted to know, he said, her thoughts on the matter.

Jackson listened without interruption as the Senator laid out his case.

The legal doctrines, Cornyn continued, driving those circumventions are “substantive due process” and “unenumerated rights” and included, he said, “abortion, contraception, and same-sex marriages.”

“But when the courts overrule the decisions made by the people in 32 of 35 states that decided to recognize only traditional marriage as being between a man and a woman, that is an act of judicial policymaking, is it not?”

To underline his concern, Cornyn quoted Justice Hugo Black, who served on the Supreme Court for 34 years and died in 1971.

Cronyn read Black’s comments that “This use of judicial review thus subverts the liberty of government by the people, overturning laws enacted by legislatures, who are answerable to the electorate, rather than to the majority of the Supreme Court.”

“For the purposes of my question,” Cornyn said to Jackson, “Justice Black also said, ‘The adoption of such a loose standard for holding laws unconstitutional will amount to a great unconstitutional shift of power to the courts which I believe will be bad for the courts, and worse, for the country.”

Jackson’s reply to Cornyn’s discourse was, “The court has identified standards for the determination of rights under the 14th Amendment, substantive due process.”

“And who gives them the right to do that?” asked Cornyn. “If it’s not mentioned in the Constitution, where is the right of the court to substitute its views for that of the elected representatives of the people? Where does that come from?”

Jackson decided not to consider the pros and cons of the premise but instead identified what qualifies as an unenumerated right.

“The court has interpreted the 14th Amendment,” she said, “to include this component, the unenumerated right to the substantive due process, and the court has said that the kinds of things that qualify are implicit in the concept of ordered liberty or deeply rooted in our nation’s history or tradition.”

Cornyn immediately used an example of the nation’s history and tradition, and its violation, he said, via substantive due process.

“Well, Judge,” Cornyn said, “in the Obergefell case [Oberegefell v. Hodges, 2015], [Chief] Justice Roberts wrote in his dissent that ‘the court invalidated marriage laws of more than half the states and orders the transformation of a social institution that has formed the basis for human society for millennia.”

Cornyn said, “That was the basis for the institution of marriage, the practice for millennia and the recognition that marriage was between a man and a woman. That is an act of judicial policymaking, is it not?”

Jackson succinctly said, “Senator, the Supreme Court has considered that to be an application of the substantive due process laws of the 14th Amendment.”

Cornyn paused then said, “Well, one of the things that concern me, is here is an example of the courts finding a new fundamental right that is mentioned nowhere in the document of the Constitution.

“That’s the product of simply court-made law, that we’re all supposed salute smartly and follow because nine people—who are unelected, who have lifetime tenure—five of them decided this is the way the world should be.”

Cornyn imagined that a future court may “tell us that we’ve found another unenumerated right and we’re going to reject the right of the American people to determine what the policies ought to be as regards to that right because we—the nine people sitting on the Supreme Court—have decided we have discovered an unenumerated right and it shall be the law of the land and no legislature can pass any law that conflicts with it.”

‘Not a Trick Question’

“What other unenumerated rights are out there,” Cornyn asked Jackson, “or can you say?”

“Senator, I can’t say,” Jackson said. “It’s a hypothetical that I can’t comment on. The rights that the Supreme Court has recognized as substantive due process rights are established in its case law.”

Cornyn smiled and said, “Your Honor, this is not a trick question.”

Jackson laughed in return and said quickly, “I understand. I’m just not in a position to speak to the …”

“Well, can you understand why ordinary folks wonder, ‘Who do these people think they are? And where does this authority come from?”

Cornyn said, “I think the authority comes from ‘we the people,’ that’s the source of legitimacy of government.”

He asked Jackson how she planned to avoid the appearance of “carte-blanche” policymaking, allowing judges “to do whatever they want?”

Cornyn said, “As a member of the United States Supreme Court, you will be bound by nothing. You will be unaccountable to the voters. Whatever they [voters] said will be irrelevant … and anybody who disagrees with us [the court] will be labeled a bigot or be accused of discrimination.”

Jackson said, “I see why it is a concern and I would just say that although the Supreme Court is not bound in the sense of having to apply prior precedent there is “stare decisis” in our world that the Supreme Court applies.

The Latin, “stare decisis” is defined as, “to stand by things decided” and is the court doctrine that binds courts to follow legal precedents set.

In a not-so-veiled reference to upcoming Supreme Court decisions on Roe V. Wade, Cornyn said, “Well, thank goodness the court has been willing to revisit its precedent or we’d still be living with Plessy v. Ferguson [upholding segregation], or Dredd Scott (human beings as property).

The discussion moved on from that comment to other ideas.