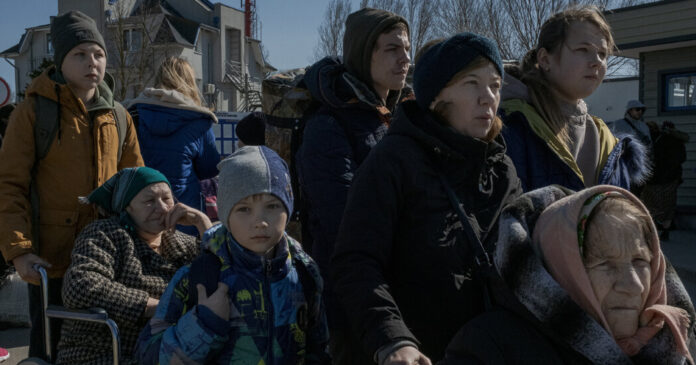 The United States is not considering airlifting Ukrainians to the country, as it did during the military withdrawal from Afghanistan, they said.

Humanitarian parole historically has been extended during and immediately after war to provide immediate protection to vulnerable people more quickly than the lengthy process of resettling them as refugees, which can take years.

But refugee experts are concerned that humanitarian parole fails to offer a more durable solution, because it does not open any direct path to legal residency for refugees who may have no homes to return to. They would have to qualify for asylum, which has been a cumbersome process that involves navigating a system that was overstretched even before tens of thousands of Afghans fleeing the Taliban joined the yearslong backlog in recent months.

“We welcome the administration’s announcement, but we hope the United States commits to admitting Ukrainians in a permanent legal status so that they regain some control over their lives,” said Melanie Nezer, a senior vice president at HIAS, one of the nonprofits contracted by the government to receive refugees.

“By definition, we are talking about many people with family and support networks here,” she said.

The United States is home to about a million people of Ukrainian descent, with substantial communities in New York, Pennsylvania, California and Washington State. Thousands are evangelical Christians who began arriving in the 1990s, after Congress passed a law allowing persecuted religious minorities to come to the United States as refugees. The early arrivals have continued to sponsor relatives to join them, and about 7,000 are currently in the pipeline

In Europe, Poland, Moldova and Romania have opened up makeshift shelters to accommodate Ukrainians displaced since Russia’s invasion began destroying wide swaths of their country. The European Union early this month enacted the Temporary Protection Directive, a collective protection for Ukrainian refugees, which allows them to remain in the region for a year, with the possibility of extension.

Outside the E.U., Britain, Ireland, and Canada have launched private sponsorship programs.

Human rights groups, American citizens and the Slavic immigrant community in the United States have been clamoring to take in refugees, and websites have been matching willing hosts with Ukrainian families. But without official approval, only those with U.S. tourist or business visas can legally enter the country.