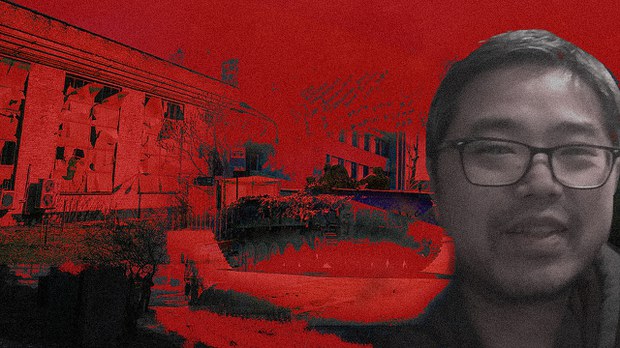 “Ukraine Uncle” is the nickname used by a Chinese national living in Kyiv whose short video clips and tweets from the front line of the Russian invasion of Ukraine have garnered him more than 35,000 followers on Twitter. He has posted close-up clips of his local coffee-shop, poignant glimpses of Ukrainians carrying on with their lives, and before-and-after shots of shelled buildings. He spoke to RFA’s Mandarin Service recently about the war, and why he stays on in Kyiv:

RFA: So whereabouts in Kyiv are you?

RFA: Is that in the center of the city, or near the edge?

RFA: What’s the situation in Kyiv now? We see that the Russian convoys are all on the edge of the city, but they don’t seem to have moved into it, is that right?

Ukraine Uncle: The only thing the Russians can really do is shell us. But in the northwest corner of Kyiv, more than 200 people were reported dead today, so I guess the shelling over there is more serious. I don’t think it is very likely that Russia will move into Kyiv [with ground forces] because they are too few in number. They only have about 70,000 or 80,000 Russian troops to take a city as big as Kyiv. They would need at least 500,000 or 600,000 or even a million troops for a ground attack.

RFA: We have seen heroic resistance from the Ukrainians throughout this war. What’s your understanding of their behavior?

Ukraine Uncle: Actually, I liked it here in Ukraine very much, as soon as I got here. I felt as if they had gotten rid of the overdependence on the government that they had during the communist era. The people here are like wild animals in their natural habitat, as opposed to caged bunnies and kittens like they are back home. They yearn for freedom, and have a strong ability to self-govern. After I got here, I saw that the subway here is not managed at all, there are no safety measures, nor any security checks, and you can go in casually. My roommate said that in thirty years, there has never been a major criminal or terrorist incident. This shows that these people can live freely and peacefully without any supervision, with very good public order. Putin has claimed that there are some pro-Russian forces in Ukraine who want to return to the era of the Soviet Union, but there are none.

RFA: Besides you, are there any other Chinese people around?

Ukraine Uncle: I haven’t met any other Chinese people, and I haven’t contacted any. I guess most of them are leaving.

RFA: Is there anyone at the Chinese embassy?

Ukraine Uncle: To be honest, I don’t even know where the embassy is. They can’t offer much in the way of help, anyway. I called them, and they told me to leave under my own steam by train. I thought, what’s the point in that? I can leave if I want to. A lot of friends of mine have managed to find transportation out to the western part of the country. If I wanted to leave, I could just ask them about it.

RFA: Have you got normal supplies of water and power, and an internet connection?

Ukraine Uncle: Everything is normal, including heating and so on. It’s fine. There are bread, milk, eggs, etc. in the supermarket, all of which are normal. In the mailbox, it seems that our bills for property fees are still being produced, which shows that enterprises are still operating normally.

RFA: How are the prices over there now. How much do you pay for a cup of coffee?

Ukraine Uncle: Exactly the same as before the war.

RFA: How do regular people there see the war?

Ukraine Uncle: Most Ukrainians are pretty well-educated, and they must be very angry with Russia’s attack. Especially in places like Mariupol, those cities in the east, where the shelling and bombing has been was really bad, just terrible. They think Putin is unreasonable and crazy, and there is no benefit in attacking them. We think he may be trying to consolidate his own grip on power. His military operations in Georgia and Syria may have gone a bit more smoothly than here, which probably contributed to his delusions. I think he never imagined he’d meet with this kind of resistance from Ukraine.

RFA: The Polish Prime Minister said a few days ago that if Ukraine falls, Europe will no longer be Europe. What’s your view of this remark?

Ukraine Uncle: So far, Ukraine has gone all out to show its determination to defend its freedoms. So if [Western nations] don’t help them and let them fall, it will strike a massive blow at the heart of European values. Personally, I am still grateful for the help of Europe and the U.S. They have done the right thing so far. They decided not to get involved in the war, and I think they must have good intelligence that Ukraine can handle it.

RFA: But Putin seems to be taking a hard line, saying that Russia will never back down.

Ukraine Uncle: Putin has no choice. Personally, I think it’s well-nigh impossible for him to retreat, because retreat is equal to failure, and that would the end of him. However, I am also disappointed by those people in Russia who still swallow government propaganda, despite having open internet access. This is so strange to me. China is locked in behind the Great Firewall, but the Russian internet works normally.

RFA: What about the future?

Ukraine Uncle: I want it to end as soon as possible.

RFA: Do you think it will?

Ukraine Uncle: I may be forced to retreat if the shelling gets really bad, as soon as a humanitarian corridor opens up.

RFA: Have you ever been shelled?

Ukraine Uncle: I’ve heard the shelling, but I don’t think it’s happened in my neighborhood. I reckon it happened about one kilometer away.

RFA: Why haven’t you left yet? Aren’t you afraid?

Ukraine Uncle: Right now my assessment, my personal judgment, is that the probability of death isn’t very high. Then there’s the fact that the people around me, including the Ukrainians who live alongside me, are still here.

RFA: How many civilians are there in Kyiv right now?

Ukraine Uncle: According to media reports, there are about two million people still in Kyiv, that is, about half the population. But probably less than half in the area where I live. I estimate maybe a quarter.

RFA: You said about a quarter of them are still there. Why don’t they leave?

Ukraine Uncle: Probably not even that many. I have interviewed a lot of people.

RFA: What did they say?

Ukraine Uncle: So, when I needed to get my watch fixed, I asked the repairer [why they didn’t leave yet], and when I needed a haircut, I asked the barber. Everyone started out by saying it was not an option. But what if the Russians attack, I said? And they said, I’m not leaving even if they do. I mostly asked people aged between 30 and 50, and they all said they didn’t want to leave. I don’t want to leave either.

RFA: They feel that their fate is tied up with the city, right?

Ukraine Uncle: Oh, it’s not quite as noble as that. But … they’re not panicking. Sometimes there are a lot of people buying stuff in the supermarkets, and there are controls on how many can go in, which means there are long lines, with everyone queuing up outside.