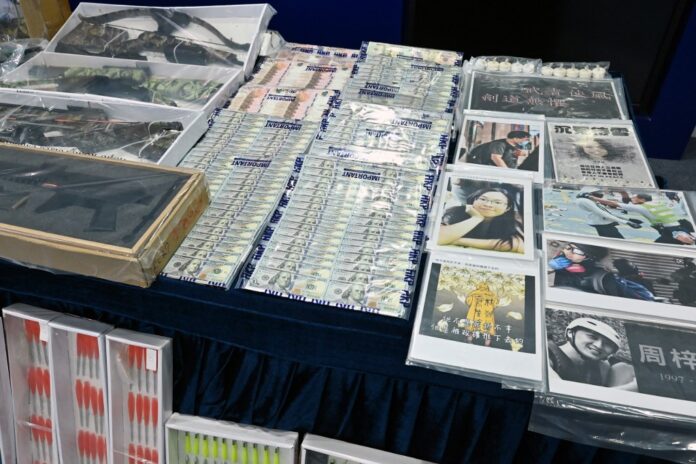 Police in Hong Kong have charged a martial arts teacher and his assistant with “sedition,” claiming they were training a clandestine force to overthrow the government and set up an independent state — armed with crossbows, airguns and their bare hands.

The 59-year-old coach and 62-year-old assistant stand accused of setting up a martial arts training center to “incite hatred” against the government, and to train an “armed force for Hong Kong independence,” police said.

Martial arts instructor Wong Tak-keung, 59, is being charged with “sedition” under a colonial-era sedition law that has been dusted off by  police and used in national security cases after the ruling Chinese Communist Party (CCP) imposed a draconian national security law on the city from July 1, 2020.

Wong has been charged with five counts of “acting with seditious intent,” “possession of an offensive weapon” and “possession of a firearm without a license,” while his assistant Cheung Man-chi, 61, faced only the weapons charges.

Both appeared in West Kowloon Magistrate’s Court on Tuesday, but no pleas were taken. The case will be heard by a national security judge, and has been adjourned until May 19 pending further investigation by police. Both were denied bail.

The center had allegedly trained students in “combat tai chi,” and police said they had seized an airgun, eight crossbows, 30 steel-tipped arrows and a collection of blades from the premises.

“The arrested persons were deeply affected by misinformation and became self-radicalized… Now they are spreading the misinformation to others,” senior police superintendent Steve Li told journalists.

The national security law has ushered in a citywide crackdown on public dissent and criticism of the authorities that has seen several senior journalists, pro-democracy media magnate Jimmy Lai and 47 former lawmakers and democracy activists charged with offenses from “collusion with a foreign power” to “subversion.”

The CCP-backed Ta Kung Pao newspaper said the martial arts school had, “without any concealment,” introduced itself as intending to “kill,” to engage in “armed revolution,” and to “establish a shadow government.”

It said showed that the 2019 protest movement — which it referred to as ‘black riots’ in a reference to the black clothing worn by protesters — hadn’t died out, but rather gone underground.

The pro-CCP Wen Wei Po said the center had set up “death squad” class to teach like-minded students how to use weapons until the time was right, and they would “urge the people of Hong Kong to … overthrow the CCP by force.”

It said the center had also held ceremonies to pay tribute to people killed during the 2019 protests.

Li said police are focusing on identifying people who may go on to commit violent acts.

“With this vicious cycle, we are very worried those radicalized will go one step further and commit terrorist attacks,” he said, but declined to disclose how many students Wong had managed to attract so far.

Police also accused the pair of calling on the public to resist the government’s attempts to contain the current outbreak of COVID-19, including the LeaveHomeSafe tracking app and the vaccination drive.

The arrests come after Hong Kong singer Tommy Yuen and two other people were arrested after allegedly calling on people to resist the current COVID-19 restrictions on social media.

Martial arts societies in southeastern China once acted as the seedbed of an attempt to overthrow the Qing Dynasty during the Boxer Rebellion of 1899-1901, which aimed to purge China of foreign colonial incursion and influence.