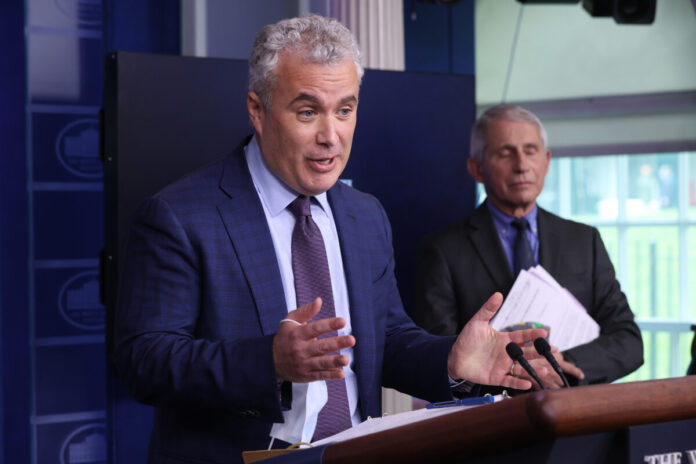 President Joe Biden and administration officials are warning that funding for additional COVID-19 vaccine booster shots, treatments, and tests will run out in the weeks and months ahead if congressional leaders don’t reach an agreement.

Because of funding approved from Congress, the federal government has for most of the pandemic made all vaccines and some treatments and tests free for Americans.

The latest tranche came in a $1.9 trillion package passed by Democrats in 2021.

But that money is running out, causing the Health Resources & Services Administration to stop taking testing and treatment claims from those without insurance on Tuesday.

The agency plans to stop accepting vaccine-related claims on April 5.

That means doctors, laboratories, and others involved in COVID-19 efforts won’t get reimbursed for their work by the federal government.

Also this week, the administration cut how many courses of monoclonal antibodies—a key COVID-19 treatment—it sent to states by 35 percent.

Officials project running out of monoclonals by late May and facing supply issues with a new preventative treatment from AstraZeneca in the fall if new funding isn’t secured.

The United States has bought enough COVID-19 vaccine doses to supply fourth doses to seniors and other vulnerable populations if regulators clear second boosters but will not have enough if fourth doses are authorized for the general population, according to Zients.

Both Pfizer and Moderna asked the Food and Drug Administration recently for clearance for additional boosters due to waning vaccine effectiveness following the emergence of the Omicron variant of the CCP (Chinese Communist Party) virus, which causes COVID-19.

Omicron is more transmissible than earlier strains and has proven better able to bypass vaccine protection, particularly against infection.

The administration also wants more money to invest in superior vaccines, which are hoped to work better than the current versions.

White House press secretary Jen Psaki told reporters earlier this month that the consequences would be “dire” if no additional funding were approved by Congress, including a hampered ability to surveil for future virus variants.

Members of Congress have been negotiating whether to approve new funding or redirect funding from past legislation, particularly the mammoth bill known as the American Rescue Plan.

Only about 10 percent of the $1.9 trillion bill was designated for COVID-19 relief. That portion of the funding is gone, Sen. Roy Blunt (R-Mo.) told reporters in Washington.

“What we’d like to know, what happened to the other money and how much of it is still left and is there enough to pay, to recharge the accounts really related to COVID and people’s health expenses?” he said.

Blunt urged the White House to “be totally transparent” about where the funds went.

Senate Majority Leader Chuck Schumer (D-N.Y.) said in a separate press conference that new funding “is really crucial and anyone who tries to block this—God forbid we have a second variant and we don’t have enough of the therapeutics, enough of the testing, enough of the vaccine—is going to regret it.”

Schumer said Democrats are working with Sen. Mitt Romney (R-Utah) and other Republicans “in good faith to find some payfors that are acceptable to Democrats and Republicans in the House and the Senate.”

Biden called for $22.5 billion in new spending for treatments, vaccines, and other measures during his State of the Union address and the White House’s COVID-19 preparedness plan, aimed at reducing severe illness and keeping schools and businesses open, included new measures like a national “test-to-treat” program.

Some members thought they were close to a deal to include much of the requested funding, around $15 billion, in a larger bill in March. But House Speaker Nancy Pelosi (D-Calif.) removed the piece because members couldn’t agree on specifics.

Biden had called for $22.5 billion in new spending for treatments, vaccines, and other measures during his State of the Union address; and the White House’s COVID-19 preparedness plan, aimed at reducing severe illness and keeping schools and businesses open, included new measures like a national “test-to-treat” program.