Wheat Prices Soar on Ukraine Fears, but US Growers Can’t Cash in 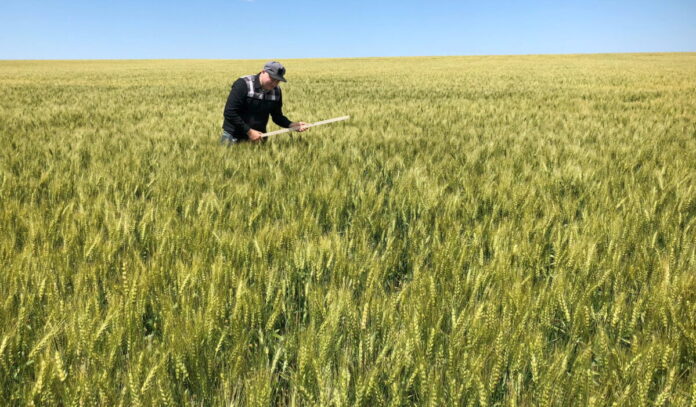 Local prices shot up roughly 30 percent to nearly $12 a bushel, about the highest Ehmke could recall in 45 years of farming near the western Kansas town of Healy.

Instead of reaping a windfall, Ehmke found a commodities market turned upside down. He and his wife Louise told Reuters they couldn’t sell a nickel of their upcoming summer wheat harvest for future delivery. Futures prices for corn and wheat had rocketed so abruptly that many along the complex chain of grain handling—local farm cooperatives, grain elevators, flour millers and exporters—stopped buying for fear they couldn’t resell at a profit.

Others couldn’t afford an industry-wide risk-management strategy known as hedging that keeps global commodities markets moving. Missiles falling in Ukraine had rocked that system, sending middlemen scrambling to shore up positions in the futures market that were costing them millions of dollars per day.

“More than anything, the market is just in a panic,” Andrew Jackson, a Kentucky grain merchandiser, told Reuters.

Many of these players continue to hold back on purchases to see how the Eastern European conflict shakes out: Russia is the world’s top wheat exporter and Ukraine is a major global supplier of both wheat and corn.

While some North American millers have said they have enough grain on hand from past harvests to continue producing for several months, prolonged or repeated disruptions to grain trading could eventually contribute to already-inflated food prices.

Meanwhile, the inability to sell some of their winter wheat—whose harvest starts in June—is putting the squeeze on U.S. farmers. Growers like the Ehmkes need cash now to pay for seed and fertilizer ahead of spring planting, as well as for land rent and tax bills coming due.

Fertilizer bills alone are expected to jump 12 percent this year, after rising 17 percent last year, according to American Farm Bureau Federation and U.S. Department of Agriculture (USDA) data. If American farmers decide to cut back, that could curb yields for the fall harvest at a time when the world may soon need more grain.

“Emerging markets like Africa could have less bread to eat,” Roose said.

The unusual situation that throttled the Ehmkes stems from the system of hedging that U.S. grain growers and processors have long used to insure themselves against price swings.

For every bushel of grain they commit to buy, purchasers sell an equal amount of bushels in the futures market as a hedge to protect themselves against losses.

These commercial players are the traditional “shorts,” or sellers, in the futures market.

On the other side are futures buyers, or “longs.” These players typically are speculators such as hedge funds and investment banks not involved in the physical grain-handling business.

Following Russia’s invasion of Ukraine on Feb. 24, which Moscow dubbed a “special operation,” speculators aggressively bought wheat and corn futures, especially the nearby May contracts. The price of May wheat on the Chicago Board of Trade (CBOT) jumped 54 percent in just nine trading days, from $8.84-3/4 per bushel on Feb. 23 to $13.63-1/2 on March 8.

Russia and Ukraine together supply about 26 percent of the world’s wheat exports, according to the latest USDA data. Shipments through the Black Sea have already been disrupted.

When futures shoot higher, commercial grain sellers accrue paper losses on their short positions. That’s not necessarily a disaster, as the physical grain they have purchased is rising in value too.

But until they can sell the grain and close their futures positions, they can get squeezed financially. In recent weeks, many have faced so-called margin calls from their futures brokers, forcing them to inject enormous sums into their commodity trading accounts to cover their losses.

“It’s a massive headache that could turn into a problem if they do not have their financial house in order,” said Chad Hart, an agricultural economist at Iowa State University.

The wheat rally clobbered buyers of other crops, too.

CoBank has delivered more than $4.5 billion in loans and credit to customers to deal with margin calls and grain purchases in January and February alone, Eric Itambo, CoBank’s chief banking officer, told Reuters.

Though spot CBOT wheat futures have cooled in recent days, slipping back below $11 a bushel, the futures market has not been this volatile since 2008, when food shortages worldwide sparked riots in some countries.

Back in Kansas, the Ehmkes are eyeing a worsening drought that is hurting the winter wheat crop currently in the ground.

Still, they think they might get another chance to sell wheat at $12 or more with the Ukraine conflict showing no sign of abating.

“Just a whole bunch of things are telling us the price of wheat could be substantially higher than what it is right now,” Vance Ehmke said.

By Julie Ingwersen and P.J. Huffstutter