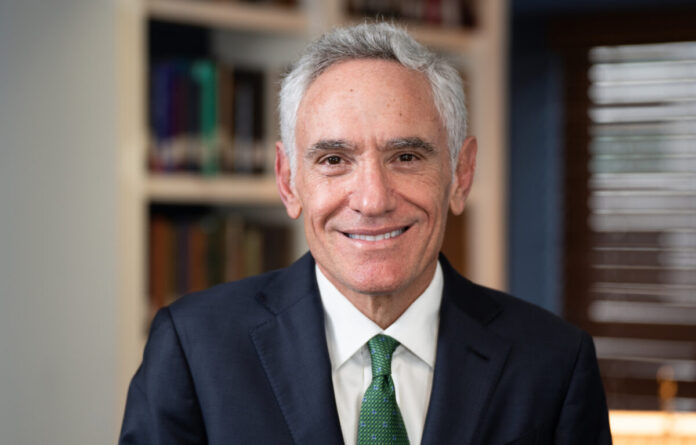 The restrictive policies in response to the COVID-19 pandemic have largely been a failure and we need accountability for those “destructive” measures, said Dr. Scott Atlas, former special advisor to then President Donald Trump on the coronavirus pandemic.

“We need accountability of the people who got what they wanted. They got implemented the policies they wanted. Those policies failed,” said Atlas, referring to restrictive measures such as lockdowns, quarantines, school and business closures, and vaccine mandates for young people.

“We have 900,000 plus Americans who’ve died from COVID, according to the categorization, millions of families destroyed, yet the same people are in charge. I don’t understand how that could possibly happen,” Atlas told EpochTV’s “American Thought Leaders” program that premiered on March 22.

According to the data from the Centers for Disease Control and Prevention (CDC), as of March 22, the COVID-19 mortality in the United States is 973,220, the highest number in the world.

“When we see that proof has come in, it’s very difficult to proceed without having the accountability and the public airing to the public, to know that those strategies were wrong. It has to be admitted, and there has to be accountability or we can never restore trust in these agencies and even science itself until we get to that truth,” said Atlas.

A Spring 2021 study by Christian Bjornskov analyzed 24 countries and concluded that lockdowns did not reduce the deaths compared to no lockdowns. A Jan. 2021 study by Stanford professor Eran Bendavid and colleagues showed that severe lockdowns did not reduce the spread of the infection. A June 2021 study (pdf) by the National Bureau of Economic Research analyzed 43 countries and 50 U.S. states and found that lockdowns increased the excess deaths.

“When the lockdowns were implemented, the deaths actually started to go up after they were coming down. And that’s true in the United States as well,” said Atlas. “So when you’re talking about how many people died over a nonpandemic year, the excess deaths increased from the lockdowns. Lockdowns killed people.”

According to the CDC, excess deaths are “typically defined as the difference between the observed numbers of deaths in specific time periods and expected numbers of deaths in the same time periods.” The agency said estimated excess deaths could provide information about the burden of mortality potentially related to the COVID-19 pandemic, including deaths that are directly or indirectly attributed to COVID-19.

Atlas also mentioned a Jan. 2022 Johns Hopkins study (pdf), which found that lockdowns only reduce mortality by 0.2 percent on average. “Such a standard benefit-cost calculation leads to a strong conclusion: lockdowns should be rejected out of hand as a pandemic policy instrument,” the study stated.

“The biggest sin of the management of COVID was the closure of the schools,” Atlas said, adding school closures caused spikes of suicide attempts, psychological damage, and physical issues among children and young people. It’s also “most harmful” and “inexplicable” to inject young children with an experimental vaccine for a disease they do not have a significant risk from.

Atlas said those who “own the results of the policies” were governors implementing lockdowns and those who could advise those governors—the three most influential doctors on then-White House Coronavirus Task Force—Dr. Deborah Birx, then-White House coronavirus response coordinator; Dr. Anthony Fauci, director of the National Institute of Allergy and Infectious Diseases; and Dr. Robert Redfield, then-director of CDC.

“They had got what they wanted. They advised that,” said Atlas.

With a 25-year background in academic, medicine, clinical practice research, Atlas said he was stunned by the behavior of the three influential figures mentioned above when he worked as special advisor to Trump.

“What I heard and saw was the behavior of people who did not have any scientific papers with them at these meetings, they did not have a working knowledge of the published literature,” said Atlas. “This was a sort of behavior of a bureaucrat interested in covering other bureaucrats, and manipulating or working with the media to critique people who had a different opinion, which was myself.”

During his tenure as special advisor to Trump, Atlas had been described as the “often-dissenting” adviser.

Atlas said when he organized a group of scientists and medical physicians to meet with Trump and then-Vice President Mike Pence, Birx pulled out at the last second. “That is not the behavior of someone who really should be at the table for looking at a complicated scientific and medical policy question. That’s the behavior, in my view, of a bureaucrat,” said Atlas.

Neither Birx, Fauci, nor Redfield responded to a request for comment.

During a Congressional hearing last October, Birx said that Atlas’s theories were “dangerous” and “reckless.”

Birx testified during the hearing that Atlas believed “anybody who wasn’t in the vulnerable group should be allowed to increase activities without mitigation because it didn’t matter if they became infected with COVID. … I think he believed there was almost zero risk to anybody unless it would result in hospitalization or death.”

In a February press briefing, White House press secretary Jen Psaki said that the Biden administration was not “pushing lockdowns.” She claimed most lockdowns happened during the Trump administration.

However, Fauci, Biden’s chief medical adviser, recently signaled that lockdowns might still needed in the future.

“If in fact, we do see a turnaround and a resurgence, we have to be able to pivot and go back to any degree of mitigation that is commensurate with what the situation is,” Fauci told CNN last week.

Accountability for Leaders in Federal Health Agencies and Big Pharma

Atlas said public health leaders and people in Big Pharma should also be held accountable for the failed COVID-19 response.

“One of the biggest failures of the [National Institutes of Health (NIH)] and the [Food and Drug Administration (FDA)]  here during this pandemic was a complete failure to rapidly do the clinical trials on drugs that were already FDA-approved in the spring of 2020,” said Atlas.

At the start of the pandemic, some doctors claimed that hydroxychloroquine and ivermectin, both FDA-approved, were effective in treating COVID-19 patients. More doctors and studies have claimed the same since then. However, the FDA hasn’t approved the two drugs for treating COVID-19 patients. NIH’s COVID-19 Treatment Guidelines state that existing data don’t support using these two drugs against COVID-19.

“Now we’re two years in, we still have not done these trials,” said Atlas.

NIH hasn’t responded to a request for comment. FDA said the agency had helped to “significantly accelerate” therapeutic developments during the pandemic.

“As scientists began to investigate potential treatments for COVID-19, FDA sought to quickly focus its resources to support the development of new
therapies. To do so, in March 2020 we launched the Coronavirus Treatment Acceleration Program, or CTAP,” an FDA spokesperson told The Epoch Times via email.

“CTAP’s efforts have helped drug developers overcome challenges to significantly accelerate therapeutic development during the COVID-19 pandemic. As of March 11, 2022, more than 470 clinical trials have been initiated and over 600 additional clinical trials are in planning stages. The products under investigation include antivirals, immunomodulators, neutralizing antibodies, and more.”

People in Big Pharma and CDC are also responsible for not being transparent, said Atlas.

“We need accountability on the people in Pharma, who didn’t show fully the data,” said Atlas. “We don’t have the full set of data from the CDC on complications from the vaccines. Why not?”

“We’ve had hundreds of millions of doses of these vaccines [administered], we don’t have a full set of data on the complications yet. Why? What kind of a scientific process is that?”

The Epoch Times has reached out for comment to the CDC and the three major COVID-vaccine manufacturers, Pfizer, Moderna, and Johnson & Johnson.

The Right Direction Ahead

There are “general things and specific things” to move forward in a right direction that is both proactive and positive, according to Atlas.

One of the specific things we need to do is follow those Western European nations that lifted those restrictions.

Sweden, Norway, and Denmark eased their COVID restrictions later last year. The UK, Ireland announced in early January to end most of their COVID-19 restrictions. More countries followed their footstep soon after.

“Secondly, these variants, the expectations have to be set with the public. This is a big point that I tried to get done in the White House,” said Atlas. “The public needs to have an expectation: this disease, this infection, this virus is not going to disappear. It doesn’t magically go away. It’s irrational to think that it would go away from these mitigation measures, to begin with.”

However, Atlas understands those people who are responsible won’t come forward to admit their mistakes.

“I think therefore, the burden is on individuals to become critical thinkers, to see who’s speaking the facts and the data consistently, to trust people not just on the basis of their title, but on the basis of what they say, and to learn the data to some extent themselves. I think that we need to have a more of an individually-driven response here,” said Atlas. “And otherwise, you’re abrogating your responsibility to your family and your child if you don’t do that.”