View To A Kill: Humans Interrupt Cheetah’s Impala Hunt And People Are Mad 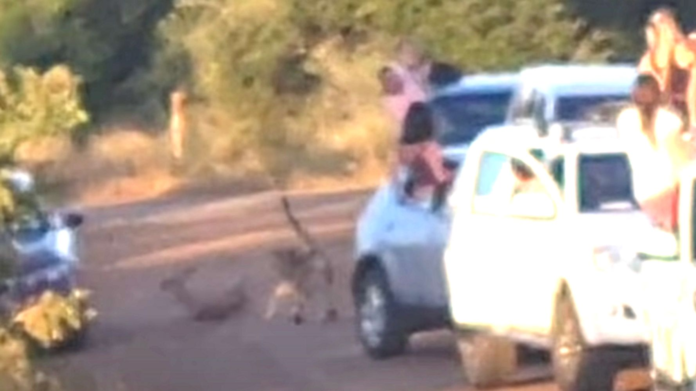 The fascinating spectacle of a cheetah hunting an impala turned infuriating when rule-breaking tourists interfered. (Watch the video below.)

In video posted Tuesday by Latest Sightings from South Africa’s Kruger National Park, the quick cat singled out its prey in an impala herd and chased it into a spectator’s BMW, according to the YouTube post.

Many people hung out of their parked cars to view the action, violating the park’s rules and apparently spooking the cheetah.

The big cat retreated to the bush as the impala lay stunned next to the car, but eventually slinked back to drag the impala away.

Some who watched on YouTube expressed dismay at the encroachment of visitors.

“Extremely unethical from an animal stewardship perspective,” one commenter wrote. “Why on earth were so many cars permitted to enter into such a small area of the park?”

“Both prey and predators were affected by the congested traffic and human noise,” another complained.

A spokesperson for Latest Sightings, which posts wildlife videos from Kruger National Park, told HuffPost Wednesday “it is quite sad to see that many visitors breaking the rules.”

“Because the sighting happened near Crocodile Bridge a popular entry point into the park, the traffic built up really quickly and that is why there are so many people at the sighting,” the spokesperson added.