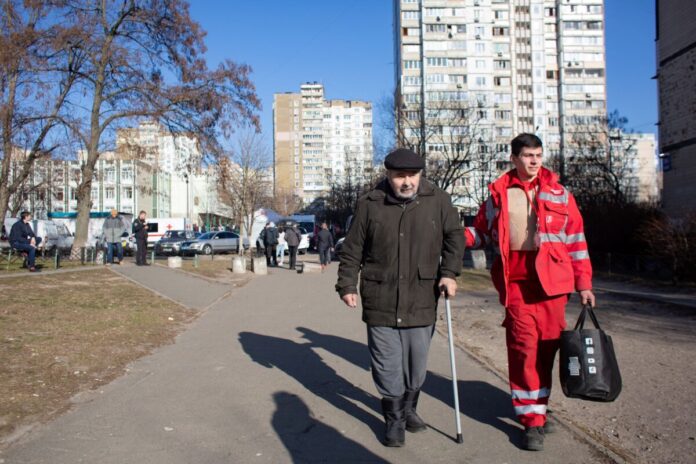 The latest on the Russia–Ukraine crisis, March 23. Click here for updates from March 22.

Ukrainian leaders accused Russia of seizing 15 rescue workers and drivers from a humanitarian convoy trying to get desperately needed food and other supplies into the bloodied port city of Mariupol, which also came under naval attack after weeks of air and land strikes.

Zelensky, speaking late Tuesday in his nightly video address to his nation, accused Russian forces of blocking the aid convoy despite agreeing to the route ahead of time.

“We are trying to organize stable humanitarian corridors for Mariupol residents, but almost all of our attempts, unfortunately, are foiled by the Russian occupiers, by shelling or deliberate terror,” Zelensky said.

The Red Cross confirmed a humanitarian aid convoy trying to reach the city had not been able to enter.

The convoy’s attempt to deliver assistance came as Russian navy vessels joined in what have been weeks of Russian air and land strikes into Mariupol, U.S. officials said.

Russian military forces have destroyed a new laboratory at the Chernobyl nuclear power plant that among other things works to improve management of radioactive waste, the Ukrainian state agency responsible for the Chernobyl exclusion zone said Tuesday.

The Russian military seized the decommissioned plant at the beginning of the war. The exclusion zone is the contaminated area around the plant, site of the world’s worst nuclear meltdown in 1986.

The state agency said the laboratory, built at a cost of 6 million euros with support from the European Commission, opened in 2015.

The laboratory contained “highly active samples and samples of radionuclides that are now in the hands of the enemy, which we hope will harm itself and not the civilized world,” the agency said in its statement.

Radionuclides are unstable atoms of chemical elements that release radiation..

In another worrying development, Ukraine’s nuclear regulatory agency said Monday that radiation monitors around the plant had stopped working.

Ukrainian President Volodymyr Zelenskyy said Russian forces not only blocked a humanitarian convoy trying to reach besieged Mariupol with desperately needed supplies on Tuesday but took captive some of the rescue workers and bus drivers.

He said the Russians had agreed to the route ahead of time.

“We are trying to organize stable humanitarian corridors for Mariupol residents, but almost all of our attempts, unfortunately, are foiled by the Russian occupiers, by shelling, or deliberate terror,” Zelenskyy said in his nighttime video address to the nation.

Deputy Prime Minister Iryna Vereshchuk said the Russians seized 11 bus drivers and four rescue workers along with their vehicles. She said their fate was unknown. The figures couldn’t immediately be confirmed.