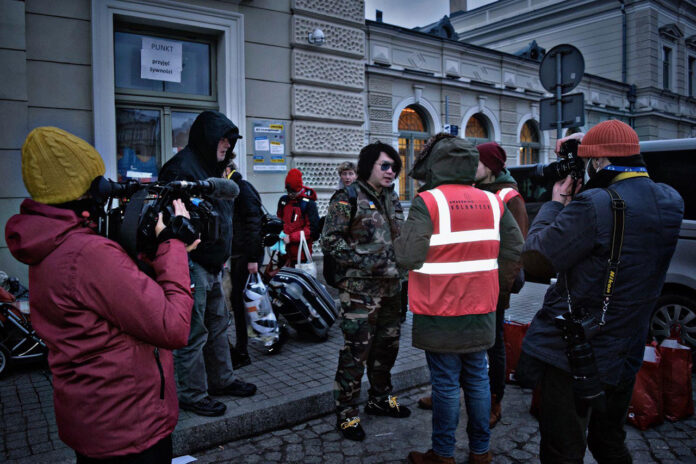 Yi Qiwei, a U.S. national born in China, recently joined the International Legion of Defense of Ukraine to fight the Russian invasion, alongside an estimated 20,000 other foreign nationals. Yi, a writer who grew up in a family of Chinese officials and now divides his time between the U.S. and Japan, started out helping refugees fleeing Ukraine, before signing up to fight for Ukraine. He spoke to RFA’s Mandarin Service about his daily life as a soldier, and his reasons for joining the war:

Yi Qiwei: I’m in Ukraine now, and I don’t know how to pronounce the name of this place, Szeginie, I think

RFA: Where is this place roughly? It’s on the western border of Ukraine, isn’t it?

Yi Qiwei: It’s a small village across the border from Medyka port in Poland.

RFA: What is the situation there now?

Yi Qiwei: It was pretty straightforward getting in [from Poland], although the line to get out [of the country] was nearly three miles long.

Yi Qiwei: Yes, it is better to enter Ukraine from Poland, because there are not many people.

RFA: There are still large numbers of refugees leaving the country, right?

RFA: Did you see any Chinese among them?

RFA: Why did you go to Ukraine?

Yi Qiwei: I came here to join the army. So, we didn’t go through immigration. We went first to Medyka, Poland, where there was an assembly point, where we reported for duty … then they gave us a pass.

RFA: Can you show us your pass?

Yi Qiwei: It’s in electronic form. I can’t let you see it because of my personal details.

RFA: You said you came from Poland, where did you come from before that?

Yi Qiwei: I originally came [to Europe] to dance [at] the Tomorrowland Winter music festival in France. I wanted to take advantage of the spring break to come out and have a good time. I flew directly from the United States. I had been planning to go to the French Alps from the Netherlands to dance. But then this war happened.

RFA: You decided on the spur of the moment to join the Foreign Legion?

Yi Qiwei: Yes, I made an on-the-spot decision.

RFA: Why did you decide to join the Foreign Legion?

Yi Qiwei: When I went to the central square in the Netherlands, there were a lot of people demonstrating there that day, which was a big shock to me. Why? Because there were so many protests across the whole of Europe, including Poland, London, Amsterdam. All of the major cities. Ukraine started its Foreign Legion program shortly after that, in early March.

I have had a dream of being a soldier since I was a child, so there’s that. Secondly, I wanted to be able to come back alive and show my daughter her handsome father who has been on the battlefield. I really thought like that at first. But when we went out there to distribute supplies and arrange transportation and accommodation for refugees, the effects of war are clearly visible. A lot of the kids are around the same age as my daughter. They’re so young, and they’re sleeping in a train station, sleeping in McDonalds, and in such cold weather. It’s really pitiful.

RFA: You are now in Ukraine. How does this village relate to the battlefield?

Yi Qiwei: Poland and Ukraine have a total of five ports, and this is actually one of the five ports from which refugees can leave.

RFA: When you saw these scenes, you said that you had a dream of becoming a soldier, but this war happened in a complex international situation. How do you view this war?

Yi Qiwei: I think this war is wrong. Everyone will say that war is wrong, or that war is bad, but why is it bad? I’m leaving soon, and I don’t know where they will deploy me, whether it’s to the logistics corps or the front line. I’m very scared.

I think that only when you really experience war, will you understand what it entails. That’s to say, you won’t want to experience it again. Only people who have never been through it go online to clamor about the happiness and interests of the people being sacrificed for the rise of a great power.

RFA: What do you think of the Chinese government’s stance on the war?

Yi Qiwei: Let’s just focus on people. Once we start talking about a stance, then we have to basically say whether Russia is in the right or Ukraine is in the right. But let’s talk about people and about life. That should come before national interests and ideology. If a country has life, it can get stronger, and its economy can develop.

RFA: But you are actually risking your own life when you go to war. How do you square that with yourself?

Yi Qiwei: My role in this war is minimal. I am like a pebble. Even if I die, no one will care. What I want to say to everyone you can only get a better understanding of what’s going on by experiencing it, as opposed to blindly believing in whatever propaganda. If China says Russia is in the right, then the [pro-CCP] Little Pinks aren’t going to echo anything the U.S. says. But what about Ukraine? I have dealt with government departments, and I hail from a family of government officials, so I know that there are a lot of mutual vested interests involved.

RFA: What is people’s attitude to you as a person of Chinese heritage.

Yi Qiwei: They were very moved that I volunteered to join the war at the age of 25, and with a family [back home]. Once, when I’d told them my story, someone from the church next door invited me to pray with them, so I think the power of faith helps people tend towards goodness.

RFA: What will you do tomorrow?