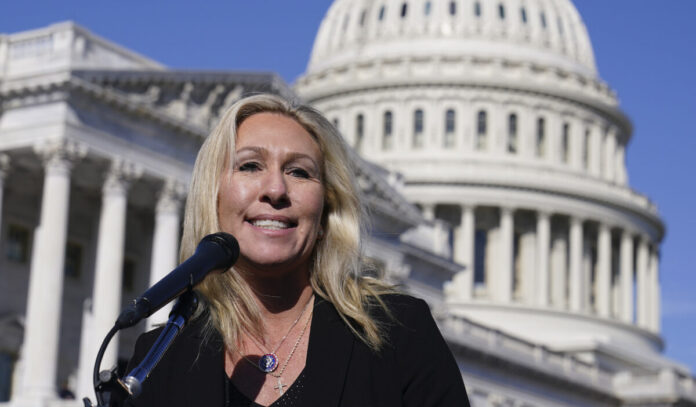 Did the U.S. government support the overthrow of Ukraine’s government in 2014, or is that Russian propaganda?

Rep. Marjorie Taylor Greene (R-Ga.) reignited debate over this eight-year-old question with her comments on March 16, when she released an anti-war statement on Ukraine.

“A potential war with Russia is not comparable with Iraq and Afghanistan. This is an eight-year-long smoldering conflict, in which peace agreements have been routinely violated by both sides … A country whose government only exists because the Obama State Department helped overthrow the previous regime,” Greene said.

The last part of Greene’s statement proved to be particularly controversial, with fact-checkers and pundits coming out of the woodwork to debunk Greene’s claim and accuse her of spreading “Russian propaganda.”

“Allegations that the U.S. fomented the 2014 Maidan Revolution—which toppled the government of Russia-aligned Ukrainian president Viktor Yanukovych—are a staple of Russian propaganda, and were a significant part of Russian President Vladimir Putin’s justification for invading Ukraine,” White House correspondent Andrew Feinberg wrote in a column for the Independent, blasting Greene for her statements.

But Greene isn’t the first to mention America’s role in inflaming tensions in Ukraine. Nor is her MAGA-style conservatism the only political faction to make such claims.

Indeed, a broad cross-cutting coalition of national security experts agree that the U.S. played a role in the downfall of Yanukovych—from conservative retired Army Colonel Douglas Macgregor to the left-leaning former CIA Russia analyst Ray McGovern, as well as numerous scholars from think tanks such as the Cato Institute, Defense Priorities, and Quincy Institute for Responsible Statecraft.

According to these groups and experts, there has been a struggle for Ukraine brewing between Russia and the West for years before the war became hot in 2022.

Former Reagan White House official David Stockman has pointed out that the supposedly pro-Russia Yanukovych actually initiated a trade agreement with the European Union in March 2012 that would have included IMF aid. But with all parties involved still struggling to recover from the 2008 financial crisis, no such deal could be culminated—which is why Yanukovych then turned to Russia, Stockman said.

“Kiev quickly pivoted to a deal with Russia in the fall of 2013, which was willing to offer $15 billion in loans without the harsh IMF preconditions,” Stockman wrote in February. “Also, Moscow offered Ukraine a discount on Ukraine’s large gas purchases from Russia.”

Western officials were angry with the 2013 Russia-Ukraine deal. So were many pro-West Ukrainians, particularly the younger population residing in the western part of the country.

Top U.S. national security officials offered a public show of support as the pro-West Ukrainians took to the streets to protest in late 2013.

Sen. John McCain (R‑Ariz.), then the ranking Republican on the Senate Armed Services Committee, went to Kyiv to show solidarity with the activists, dining with opposition leaders—including members of the ultra right‐​wing Svoboda Party.

Not to be outdone, Victoria Nuland, then the assistant secretary of state for European and Eurasian Affairs, handed out cookies to demonstrators  in central Kyiv and expressed support for their cause in several visits in December 2013.

Then, in what observers view as the most compelling evidence that U.S. officials were behind Yanukovych’s ouster, a phone call between Nuland and U.S. Ambassador to Ukraine Geoffrey Pyatt was leaked online in February 2014—in which the two officials discussed who Ukraine’s next government should be in the wake of Yanukovych’s downfall.

“Yats is the guy,” Nuland said at the time, referring to Arseniy Yatsenyuk, who was designated as the new prime minister of Ukraine following Yanukovych’s removal in February 2014.

At the time, then-State Department spokesperson Jen Psaki denied that the Nuland-Pyatt phone call was evidence of the United States meddling in Ukrainian politics, or trying to engineer a particular outcome.

“It should be no surprise that U.S. officials talk about issues around the world. Of course we do. That’s what diplomats do,” Psaki said in 2014, calling the Russian officials’ publication of the tape “a new low in Russian tradecraft.”

However, many foreign policy experts believe the timing of the call was too close to the regime change to be a coincidence.

“You had a situation where a democratically elected, pro-Russian president was deposed in a manner that Putin could plausibly think that the U.S. was behind. I mean, we did have Victoria Nuland, a high-ranking State Department official, recorded secretly by the Russians, basically conspiring to decide who the successor government was going to be once the guy was deposed,” said Robert Wright, publisher of the Nonzero newsletter.

“And then, suddenly you have a pro-American—and in Putin’s view, American-installed—government in Ukraine, and all of the sudden the status of a really important Russian naval base in Crimea is in question,” Wright said Dec. 17 on Crashing the War Party, a foreign policy podcast hosted by Quincy Institute for Responsible Statecraft senior adviser Kelley Vlahos.

Along with Nuland’s public signs of support and her leaked phone call, experts who believe she helped overthrow Yanukovych point to the fact that foreign aid and weapons sales to Ukraine have skyrocketed since 2014, doubling from less than $300 million before 2014 to more than $600 million in 2020.

Neither the State Department nor Nuland responded to an Epoch Times inquiry about the matter.

Russia scholar Clint Ehrlich said it’s narrow-minded for Westerners to view the characterization of the 2014 Maidan Revolution as a coup, as being Russian propaganda.

Ehrlich, who was a visiting researcher at Moscow State Institute of International Relations at MGIMO University, told The Epoch Times in January that it’s a deeply held belief in Russia that Yanukovych’s ouster was indeed organized by the United States.

“I can assure you that within Russia’s government, they view it as an open-and-shut case,” he said at the time. “So, when we negotiate with the Russians, when we talk to the Russians, it’s very important to understand that they’re convinced the U.S. was ultimately responsible. And so that alters the whole framework of their decision-making.”

Ken Silva covers national security issues for The Epoch Times. His reporting background also includes cybersecurity, crime and offshore finance – including three years as a reporter in the British Virgin Islands and two years in the Cayman Islands. Contact him at ken.silva@epochtimes.us