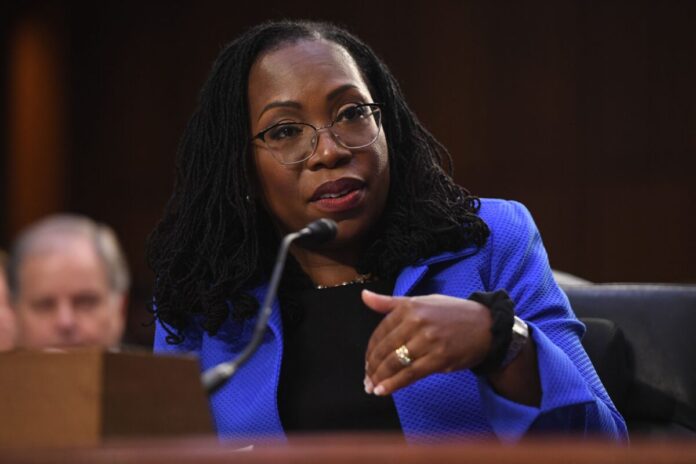 Judge Ketanji Brown Jackson, whom President Joe Biden has picked to fill the Supreme Court vacancy, said Wednesday that if confirmed, she would recuse herself from a case examining Harvard University’s “race-conscious” admissions policies.

The dispute over Harvard’s admissions policy was first raised in 2014 by advocacy group Students for Fair Admissions (SFFA), on behalf of a coalition of students who claimed to have been rejected by Harvard because of their Asian ancestry. In 2020, the Court of Appeals for the First Circuit upheld a lower court decision that it is not discriminatory when Harvard considers an applicant’s race as one factor in its admissions process, prompting the SFFA to take the legal battle to the highest court.

Jackson, who currently sits on the Court of Appeals for the District of Columbia Circuit, is also a member of the Harvard Board of Overseers, the second-highest governing body of the Ivy League school. Her six-year term is set to expire later this spring.

When asked by Sen. Ted Cruz (R-Texas) whether she would recuse herself from the lawsuit challenging what he called “explicit and egregious policy of discriminating against Asian Americans,” Jackson responded that she plans to do so.

“You’re on the board of overseers of Harvard. If you are confirmed, do you intend to recuse from this lawsuit?” asked Cruz, who was a classmate of Jackson at Harvard Law School in the early 1990s and served as chief editor of student journal Harvard Law Review.

“That is my plan, Senator,” Jackson replied.

Before the Supreme Court nomination, Jackson had made recusal decisions due to her Harvard post. In 2016, Jackson recused herself from a case challenging Education Secretary Betsy DeVos’s guidelines for how colleges should handle sexual misconduct allegations. She explained in a questionnaire (pdf) provided to the Senate Judiciary Committee that it was to avoid an apparent conflict of interest.

“I recused myself from [the 2016 case] because … I was serving on the board of a university that was evaluating its own potential response to
those guidelines,” Jackson wrote. “After reviewing the Code of Conduct for United States Judges, I determined that my impartiality might reasonably be questioned and that this issue was incurable.”

The Supreme Court will hear the Harvard case this fall. It will also hear an appeal of a ruling that the University of North Carolina (UNC) at Chapel Hill’s consideration of race in admissions was constitutional. The two cases involve almost identical issues, except that Harvard is a private institution and therefore, unlike UNC, is not bonded by the Fourteenth Amendment.

Cruz did not ask about the UNC case, although it is possible that the two cases get consolidated into one, with two schools putting up a joint defense. Jackson would still need to recuse herself in that scenario.

Share
Facebook
Twitter
Pinterest
WhatsApp
Previous articleThe US has declared a Rohingya genocide. Does it matter? — Radio Free Asia
Next articleLao villagers to be displaced by dam want more money for their trouble — Radio Free Asia