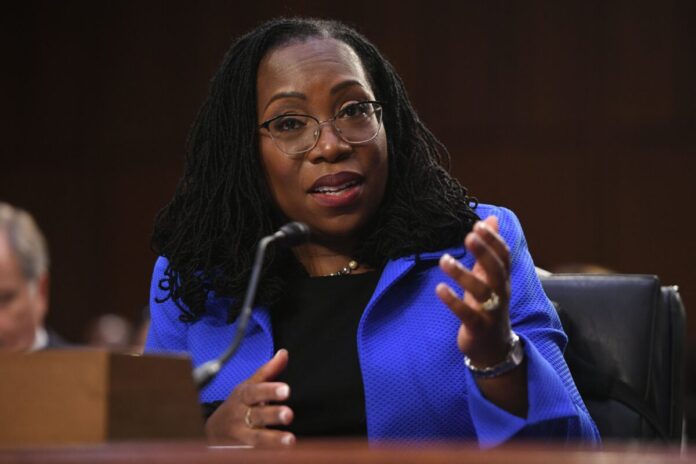 Here are some of the key takeaways from those hearings.

On various occasions throughout the hearings, Republicans on the Judiciary Committee pushed Jackson to elaborate on her judicial philosophy, but Jackson backed away from these pronouncements.

Many liberal Supreme Court justices express belief in the idea of a “living Constitution,” a theory which holds that the Constitution should be adjusted to fit the issues of the time while leaving intact the spirit of the document.

Jackson did not commit herself to either, citing instead a “methodology” that she would use on a case-by-case basis to make her decisions.

The vague answer left lawmakers on both sides of the aisle unsatisfied.

Sen. John Kennedy (R-La.) told Jackson she was “very intelligent and very articulate,” but admitted he was “still a little uncertain about how you think, how you approach cases, deciding cases.”

“I want to get an idea of what kind of judge you’d be,” Sen. Dianne Feinstein said, admitting she also wanted to know “… five or six years from now, how will we see you.”

“I want to be the kind of judge like the one I’ve been for the past decade,” Jackson replied.

She said that if she was confirmed to the Supreme Court, she would “stay in [her] lane” while “interpreting the law.” She said as well that she would “[rule] consistent with Article III” of the Constitution, which delineates the powers of the federal judiciary.

Jackson said Tuesday that she was “acutely aware that, as a judge in our system, I have limited power, and I am trying in every case to stay in my lane.”

While Republicans were dissatisfied with Jackson’s lack of a specific judicial philosophy, Sen. Sheldon Whitehouse (D-R.I.) suggested it was actually a good thing.

“I didn’t know you needed to have [a judicial philosophy],” said Whitehouse.

“The Constitution gives you the guide,” Whitehouse continued.  Her lack of philosophy “doesn’t bother me a bit. A judicial philosophy can be a screen for a predisposition.”

Jackson Pushed On When She Would Overturn Precedent, Upholds Roe v. Wade

Jackson also indicated that she would give some deference to precedent, and would use several “factors” in deterring when to overrule precedent, but said that she could not give specific answers outside of the context of a specific case.

Judiciary Ranking Member Chuck Grassley (R-Iowa) asked Jackson at one point in the hearing whether the Supreme Court should “overrule a precedent when it’s clear to justices that precedent was wrongly decided.”

Jackson said she would honor the doctrine of stare decisis, which she called “the principle that the Supreme Court uses at the outset—the sort of background rule of judicial maintenance or precedence, in order to have predictability, stability in the law—is the kind of principle the court begins with, if it’s asked to overrule or revisit a precedent.”

However, Jackson made clear that she would not apply the standard to the controversial Roe v. Wade case, which requires all 50 states to allow abortions in the first trimester.

That case, which has faced challenges from increasingly-bold GOP states, is “the settled law of the Supreme Court,” and Jackson made clear that, if faced with the decision to overturn it, she would rely on the precedent established in Roe v. Wade.

On Wednesday, Sen. John Cornyn (R-Texas) pushed Jackson on the point, asking her whether the “viability standard” established in Roe v. Wade was “arbitrary.”

“I’m not a biologist,” Jackson replied. “I haven’t studied this. I don’t know.”

“What I know is that the Supreme Court has tests and standards that it’s applied when it evaluates regulation of the right of a woman to terminate their pregnancy,” said Jackson.

Cornyn continued: “Is it your understanding under the current precedent of the Supreme Court that there is a right to abortion up to, and including, the time of delivery of the child?”

Jackson demurred, saying she is “not aware of the court having made a pronouncement about whether or not regulation can extend all the way up until birth. I’m just not aware of that.”

‘I’m Not a Biologist’: Jackson on What Is a Woman

When asked by Republicans to give her personal opinion on heated social issues related to gender, Jackson demurred, saying on various occasions that it would be inappropriate for her to give her opinion, or saying that she could not answer the question.

In one section of Tuesday’s hearing, Sen. Marsha Blackburn (R-Tenn.) asked Jackson: “Do you believe that our schools should teach children that they can choose their gender?”

“Senator, I’m not making comments about what schools can teach,” Jackson said.

“Respectfully, I am not familiar with that particular quote and case, so it’s hard for me to comment,” Jackson said.

“Do you interpret Justice Ginsburg’s meaning of men and women as ‘male’ and ‘female’?” Blackburn asked.

“Can you provide a definition for the word ‘woman’?” Blackburn asked.

Pushed further, Jackson said: “Senator, in my work as a judge what I do is I address disputes, if there’s a dispute about a definition, people make arguments, and I look at the law and I decide.”

The issue, which first came up as part of a March 16 Twitter thread by Sen. Josh Hawley (R-Mo.), was a major line of attack for Jackson throughout the hearing.

On Tuesday, Sen. Ted Cruz (R-Texas) pulled out a graphic displaying the outcomes of several cases overseen by Jackson.

In cases where she had no discretion due to mandatory minimum sentencing laws, Cruz noted, Jackson gave the recommended sentence “because she had no choice.”

But in several cases where she was not subject to mandatory minimums, Cruz showed that Jackson gave sentences well below state recommendations.

In one case, United States v. Chazin, prosecutors asked for a 78- to 97-month prison sentence, but Jackson ultimately gave him a 28-month sentence. In another, U.S. v. Hawkins, prosecutors requested 24 months in prison, but Jackson only gave the defendant three months. In U.S. v. Stewart, the defendant received a 57-month sentence, far below the 97 months requested by the state.

“Do you believe the voice of the children is heard when 100 percent of the time you’re sentencing those in possession of child pornography to far below what the prosecutors asked for?” Cruz asked.

“Yes senator, I do,” Jackson responded.

Earlier on Tuesday, Jackson made an effort to defend herself against the charge.

“That made total sense before … the internet, when we didn’t have distribution. But the way the guideline is now structured, based on that set of circumstances, is leading to extreme disparities in the system because it’s so easy for people to get volumes of this kind of material now by computers.

“So it’s not doing the work of differentiating who is a more serious offender, the way that it used to. So the commission has taken that into account, and perhaps even more importantly, courts are adjusting their sentences in order to account for the changed circumstances. But it says nothing about the court’s view of the seriousness of this offense.”

However, many Republican lawmakers, including Sen. Lindsey Graham (R-S.C.) were dissatisfied with the response, and questioning on the issue continued well into Wednesday’s hearing.

During a line of questioning on Wednesday, Graham opined that Jackson had failed to properly punish offenders in a way that would deter others, but Jackson insisted that she gave sentences on the basis of the totality of circumstances in the case, including deterrence.

Democrats and the White House have defended Jackson, saying that the sentences she has handed out were consistent with federal sentencing guidelines, and have called the GOP line of questioning “demagogic.”

Throughout the hearing, Democrats emphasized that, if confirmed, Jackson would be the first black woman to sit on the Supreme Court. Several Republicans, however, criticized this as hypocritical in view of treatment given by Democrats in the past to GOP federal court appointees like Janice Rogers Brown.

Judiciary Chairman Dick Durbin (D-Ill.) said “Not a single justice has been a black woman. You, Judge Jackson, can be the first.

“It’s not easy being the first,” Durbin continued. “Often you have to be the best. In some ways, the bravest. Many are not prepared to face that kind of heat, that kind of scrutiny, that ordeal and the glare of the national spotlight.”

If Jackson is confirmed, Durbin added, “We can be confident that the court, its role, and its decisions will be more understandable to the American public.”

“The appointment of the first black woman to the Supreme Court—let’s be honest—should have happened years ago,” said Sen. Dick Blumenthal (D-Conn.). Her nomination, Blumenthal added, “is a giant leap into the present for our country.”

“Your service will make the court look more like America,” Blumenthal added.

The nomination of a black woman is “far past time,” Sen. Amy Klobuchar (D-Minn.) agreed.

On the GOP side, Republicans accused Democrats of two-faced attitudes toward would-be black justices.

“And they did so precisely because they wanted to prevent Judge Brown from becoming Justice Brown, the first African-American woman [on the Supreme Court].”