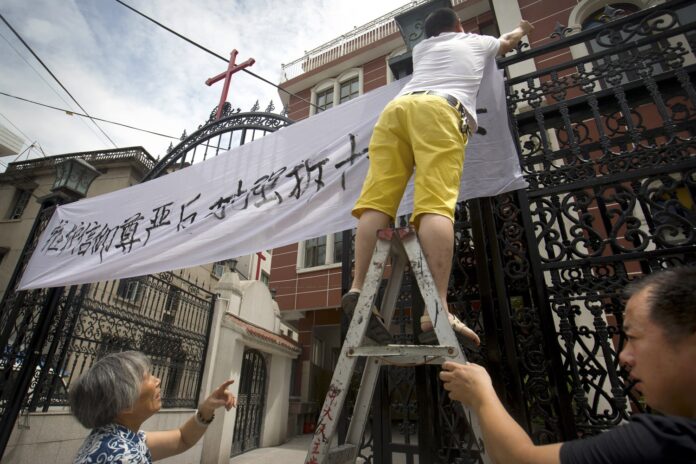 According to a March 21 directive published by the Zhejiang provincial ethnic and religious affairs commission, online training sessions will begin for would-be “religious content reviewers,” including sessions on religious policy and regulation under the ruling Chinese Communist Party (CCP).

Protestant pastor Liu Yi, who now lives in California, worked for many years at a church in Zhejiang, and said the new policy is an extension of already-stringent controls on all forms of religious activity in China.

“In the early days of the CCP regime, there were [religious affairs] officials in both Protestant and Catholic churches, monitoring the preaching and Bible study carried out by the pastors [and priests],” Liu told RFA.

“They would report the church to the authorities if they found any so-called anti-socialist content,” he said. “This kind of spying has always existed among religious groups in China [under the CCP].”

An Xuanxuan, an official who answered the phone at the Zhejiang religious affairs commission on Tuesday, said the provincial government is recruiting people to monitor all kinds of religious content, including Christian and Islamic content.

“Any religious information service or religious website has to be licensed and [its staff] trained,” An told RFA.

The online training has been launched to avoid face-to-face contact during the COVID-19 pandemic.

According to Liu, the authorities are now extending their control over religious content online, as churches and other religious organizations have increasingly moved online during the pandemic.

“Anyone can post to social media, so that’s why the government needs these people, to supervise that,” he said. “They want them to monitor and report back on any religious activities online.”

Under the rules, no individual or organization is allowed to set up religious groups online, or carrying out religious schooling or ceremonies online, nor to recruit new followers.

“This is mainly aimed at the activities of some individuals and of unofficial churches,” Liu said. “It is putting further pressure on the ability of people to preach online.”

He said only Protestant churches that join the CCP’s official Three-Self Patriotic Church body may publish any kind of content online.

While courses have already started, registration will be ongoing, with new students permitted to start at any time.

Liu said the program isn’t confined to Zhejiang, however.