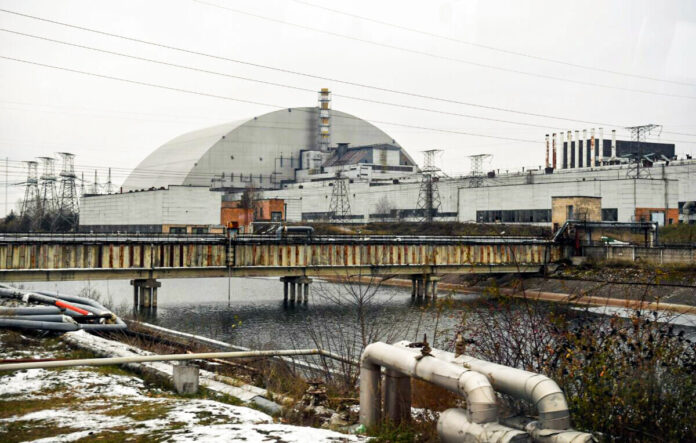 Energoatom, a Ukrainian regulatory agency that operates nuclear power plants in the country, warned on Monday that forest fires near Russian-held Chernobyl have raised radiation concerns.

In a March 21 statement, the Ukrainian parliament said that at least seven different fires were spotted near the plant by satellite images of the European Space Agency’s (ESA) Sentinel-2 satellite.

Though the now-defunct plant no longer produces nuclear power, the radiation at the site is consistently monitored, especially after a catastrophe in 1986—when an explosion at the plant became one of the world’s worst nuclear accidents.

Russian forces captured Chernobyl, which is located along the Ukraine–Belarus border and about 60 miles north of Kyiv, just days after Russian troops launched what Moscow calls “a special military operation” in Ukraine on Feb. 24.

Early on Monday, management of the Chernobyl plant carried out a “partial rotation” of personnel who had been working non-stop at the nuclear plant since the Russian take-over, allowing about half of the previous shift to return home. Nearly 50 other workers have volunteered to replace them and perform their duties to ensure the functioning of the enterprise.

Authorities said 64 people at the station were evacuated, including 50 Chernobyl shift personnel and nine members of the Ukrainian National Guard.

“It will be recalled that the staff spent about 600 hours at work, heroically performing their professional duties and maintaining an adequate level of safety,” officials said.

Ukraine has accused Russia of starting the fires and stressed that firefighters available in the region are unable to “perform their functions in full” to protect the forests tainted by decades of radioactivity due to the presence of Russian forces.

“Probably the fire was caused by the armed aggression of the Russian Federation, namely the shelling or arson,” officials said.

According to the statement, the criteria for fires in the exclusion zone should not exceed a volume of 0.02-0.08 square miles, but in the current state of the fire zone, these figures are ten times higher. This means the radiation risks increase within a radius of about 6 miles around the Chernobyl nuclear power plant.

Energoatom said in a statement obtained by Reuters that the system monitoring radiation levels in the 19-mile so-called exclusion zone in the forests around the plant is currently not working,

“There is no data on the current state of radiation pollution of the exclusion zone’s environment, which makes it impossible to adequately respond to threats,” it said. It added that seasonal forest fires pose a particular threat as the zone’s forest fire service was currently unable to work.

“Radiation levels in the exclusion zone and beyond, including not only Ukraine, but also other countries, could significantly worsen,” the country’s regulatory agency warned.