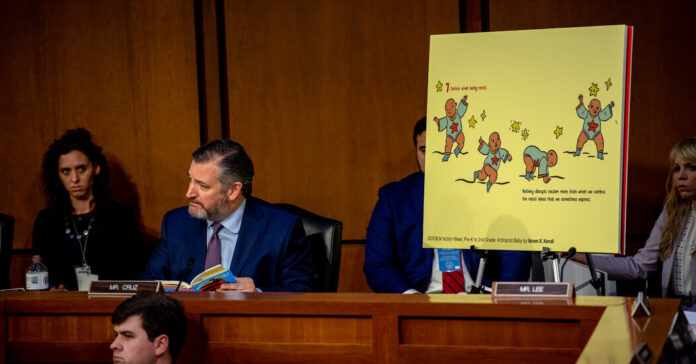 For hours on Tuesday, Judge Ketanji Brown Jackson fielded repeated questions from senators, some more emotional than others, about her past sentencing in child sex abuse cases, her defense of detainees at Guantánamo Bay and the details of her faith.

But it was a question about whether or not infants were racist that drew the first detectable sign of exasperation from Judge Jackson, who sits on the board of trustees at Georgetown Day School, a private school in Washington where the city’s elite — both conservative and liberal — send their children.

“This is a book that is taught at Georgetown Day School to students in pre-K through second grade,” Mr. Cruz said from the dais. “Do you agree with this book that is being taught with kids that babies are racist?”

Judge Jackson audibly sighed before leaning into the microphone.

During his 30 minutes of questioning, Mr. Cruz questioned Judge Jackson on her views of race, racism and critical race theory. Critical race theory is a field of study in law schools that argues that laws and institutions can incorporate structural racial bias, but Republicans have used the term as a way to criticize educational materials that describe ideas of racism, racial privilege or inequality.

After he was done with “Antiracist Baby,” Mr. Cruz asked Judge Jackson about whether or not she had read any of the children’s books. And she continued to tell the senator that she was not sure how the children’s books related to her work as a judge.

“I have not reviewed any of those books, any of those ideas,” Judge Jackson said. “They don’t come up as my work as a judge, which I am respectfully here to address.”

Earlier in his questioning process, Mr. Cruz quoted Judge Jackson’s praise of Georgetown Day’s “rigorous progressive education that is dedicated to fostering critical thinking, independence and social justice.” Judge Jackson replied that the school was private, and every “parent who joins the community does so willingly, with an understanding that they are joining a community that is designed to make sure that every child is valued.”

Lisa Fairfax, the chairwoman of the school’s board of trustees and a longtime friend of Judge Jackson’s, spoke on her behalf during the opening hearing on Monday. A representative for Georgetown Day School did not immediately return a request for comment on Tuesday.

Sensing a high-profile fight over cultural issues ahead of this fall’s midterm elections, more Republicans are likely to bring up Judge Jackson’s affiliation with the school and attempt to link her to its curriculum.

Senator Marsha Blackburn, Republican of Tennessee, said Monday that she was concerned that Judge Jackson sat on the board of a school that Ms. Blackburn claimed taught 5-year-olds that they could choose their gender and educated them about what she branded “so-called white privilege.”

“This school has hosted an organization called ‘Woke Kindergarten’ and pushes an antiracist education program for white families,” Ms. Blackburn said, calling it “progressive indoctrination of children” that raised concerns about how Judge Jackson might rule in cases involving parental rights.

Mr. Cruz began his questioning of Judge Jackson by calling her introductory statement on Monday “powerful and inspirational,” before quizzing her about a speech Judge Jackson gave at the University of Michigan describing the thesis of the 1619 Project, a 2019 collection of essays in The New York Times Magazine, as “provocative.”

Republicans have tried to characterize her as an enthusiastic supporter of the project, which centered slavery and Black Americans in the historical national narrative. Judge Jackson replied that her speech focused mostly on Black women and their contributions to the civil rights movement. Mr. Cruz then asked her what she believed critical race theory meant.

She replied that critical race theory has “never been something I’ve studied or relied on” and that it would not be something she would study or rely on if she were on the Supreme Court.