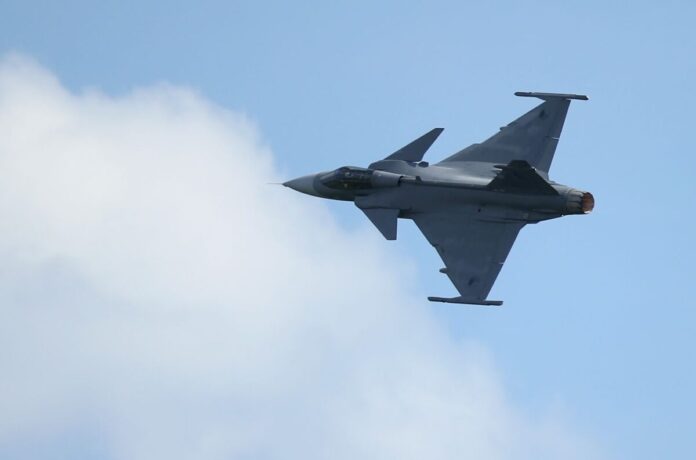 Hungary scrambled fighter jets after an unidentified aircraft entered its airspace from Ukraine, according to the NATO country’s Ministry of Defense.

The NATO Joint Air Operations Center in Hungary scrambled Saab JAS 39 Gripen jets after the ministry was “alerted to an aircraft arriving from Ukraine,” said a statement released on Monday.

“The unidentified aircraft appeared on the radar in the eastern part of the country and headed for Slovakia,” said the statement. Both Slovakia, which borders Hungary to the north, and Hungary share a border with Ukraine.

The jets “checked the indicated airspace, carried out a patrol task there, and [surveyed] the safety of the airspace” before they returned to the NATO base in Kecskemet, Hungary, said the Defense Ministry. The identity of the aircraft that entered from Ukraine was not revealed.

Local Hungarian media reported that it was the third time Hungary had to scramble its jets since Saturday.

On March 11, Foreign Minister Peter Szijjarto said that Hungarian jets were scrambled twice in one day after suspected violations by an unidentified object. They were scrambled to the northeastern portion of the country.

Earlier in March, a Soviet-era Tu-141 drone flew from Ukraine over Hungary and Romania and crashed in a park in Zagreb, Croatia. While no injuries were reported, Croatian officials said that a number of cars and property were damaged in the incident.

Those jets were identified as two SU-27 and two SU-24 fighters, according to the Swedish Armed Forces, who accused them of flying in Swedish airspace near Gotland Island.

“With the current situation as backdrop, we take this incident very seriously. Russia’s conduct is unprofessional and irresponsible,” Swedish Air Force chief Carl-Johan Edstrom said in a statement.

The Russia–Ukraine conflict has prompted NATO to bolster its defenses in recent days.

Meanwhile, Slovakia’s Ministry of Defense confirmed over the weekend that it would deploy U.S.-made Patriot surface-to-air missile batteries. They will be operated by German and Dutch troops, the agency added.

“I am happy to confirm that the first units in charge of deploying the Patriot air defense system are gradually arriving to Slovakia,” Defense Minister Jaroslav Nad wrote on Facebook.

Nad said the Patriot system will be a complement and not a replacement of the Soviet-era S-300 system that Slovakia operates.

“Temporarily, the system will be deployed at the Sliac air force base, further deployment areas are being consulted … so that the security umbrella covers the largest possible part of Slovak territory,” Nad said.