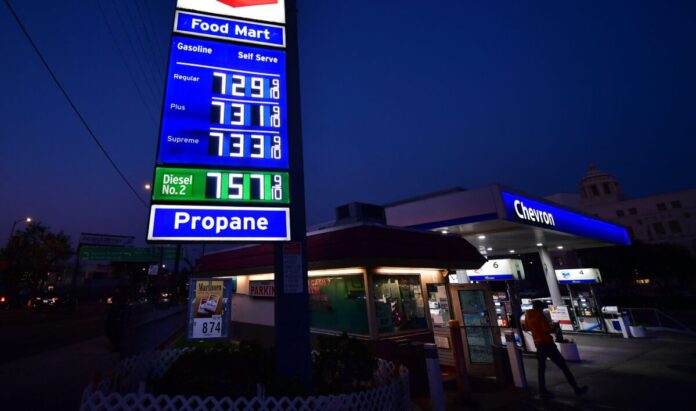 Gas prices in Los Angeles hit a new record, becoming the first major U.S. city to reach an average of $6 per regular gallon of gasoline, according to gas price tracker GasBuddy.

“Good morning … but it’s not if you’re in LA,” wrote GasBuddy analyst Patrick de Haan on Twitter Tuesday. “Los Angeles has become the first major U.S. city to reach the $6 per gallon average after reaching $5/gal just weeks ago.”

Prices in California are the highest in the United States and have greatly surpassed the national average, even though the average price nationwide has fallen since earlier this month, according to automotive group AAA.

As of Tuesday afternoon, the average price for a gallon of regular gasoline stands at $4.242, a slight drop from Monday’s average, AAA data shows. California averages about $5.86 for a gallon, followed by Nevada at $5.13, and Hawaii at $5.09.

Some California lawmakers proposed a $400 rebate for every taxpayer in California to offset the elevated prices.

“This proposed $400 rebate would cover the current 51 cents-per-gallon gas tax for one full year, 52 trips to the pump for most vehicles,” state lawmakers wrote to Gov. Gavin Newsom, a Democrat. “Notably, we believe a rebate is a better approach than suspending the gas tax … which would severely impact funding for important transportation projects and offers no guarantee that oil companies would pass on the savings to consumers.”

Missouri saw the lowest prices in the United States, averaging $3.76 per gallon, according to AAA.

Georgia and Maryland, meanwhile, have opted to suspend their respective gas taxes in recent days due to the price surge, according to reports. De Haan noted on Twitter that in the past week, gas prices dropped by about 40 cents in Maryland and 16 cents in Georgia on average.

“We saw the pain at the pump with the rapidly rising prices that everybody across the country was seeing, and we decided we wanted to take some urgent immediate action,” Maryland Gov. Larry Hogan, a Republican, told CNBC on Tuesday.

Democrats and the Biden administration have been quick to blame the surge in prices on the Russia–Ukraine conflict and on petroleum corporations. However, Jared Walczak, vice president of state projects at the Tax Foundation, told the news outlet that prices had already gone up $1.30 per gallon on average for the 16 months before the conflict because of record-setting inflation.