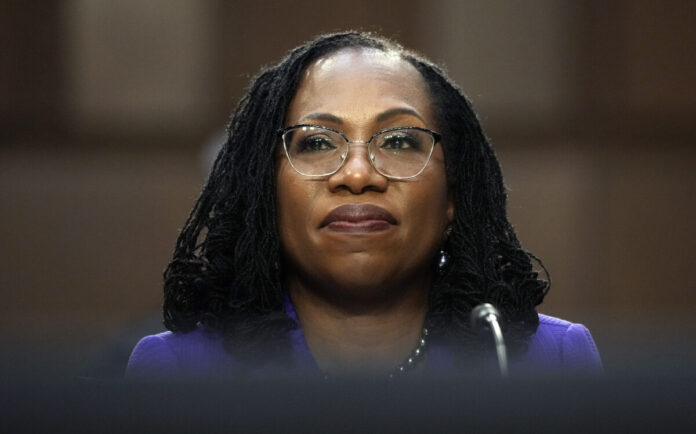 The charge was first leveled against Jackson by Sen. Josh Hawley (R-Mo.) in a March 16 Twitter thread.

“I’ve been researching the record of Judge Ketanji Brown Jackson, reading her opinions, articles, interviews, and speeches,” Hawley wrote. “I’ve noticed an alarming pattern when it comes to Judge Jackson’s treatment of sex offenders, especially those preying on children.”

Prior to becoming a federal appellate judge, Jackson served on the U.S. Sentencing Commission, a group created in 1984 for the stated purpose of “reduc[ing] sentencing disparities and promot[ing] transparency and proportionality in sentencing.”*

Once she was appointed to the bench, Jackson “put her troubling views into action,” according to Hawley.

Hawley then listed a series of cases involving possession of child pornography. In every case, Jackson gave the convicted person a significantly shorter term in prison than the guidelines called for.

“This is a disturbing record for any judge, but especially one nominated to the highest court in the land,” Hawley wrote. “Protecting the most vulnerable shouldn’t be up for debate. Sending child predators to jail shouldn’t be controversial.”

On Tuesday, Jackson defended herself from the charges when asked about them by Senate Judiciary Chairman Dick Durbin (D-Ill.), explaining her reasoning for giving lighter sentences, but not rejecting the contention that she had given lighter sentences.

According to Jackson, sentencing guidelines were originally based off of child pornography received by mail, but that the advent of the Internet has caused challenges to the old guidelines.

“That made total sense before—when we didn’t have the Internet, when we didn’t have distribution,” Jackson continued. “But the way the guideline is now structured, based on that set of circumstances, is leading to extreme disparities in the system because it’s so easy for people to get volumes of this kind of material now by computers.

“So it’s not doing the work of differentiating who is a more serious offender the way that it used to,” Jackson said. “So the commission has taken that into account, and perhaps even more importantly, courts are adjusting their sentences in order to account for the changed circumstances. But it says nothing about the court’s view of the seriousness of this offense.”

“Judges should abandon the prevention/punishment analyses that rely on legislative intent … [and] assess the ‘excessiveness’ of a sex offender statute’s punitive effects in favor of a more principled approach to characterization,” Jackson wrote.

Jackson’s Tuesday statement is the first time that she has discussed the topic, leaving several Republicans concerned about where she stands on the issue.

“What I would say, though, because there are others in the Senate who have made faulty accusations about Judge Ketanji Brown Jackson’s record, and specifically about her record on child sex crimes, so let me just take the opportunity to clear that up,” Psaki said.

“Not that most people have confusion about it, but in the vast majority of cases involving child sex crimes, the sentences Judge Jackson imposed were consistent with or above what the government or U.S. probation recommended.

“She comes from a law enforcement family, has devoted her career to standing up for the rule of law, which is why she is endorsed by so many leading law enforcement organizations in the country. Attempts to smear or discredit her history and her work are not borne out in facts.”

The poses a threat to Jackson’s confirmation in the equally-divided Senate.

Without the full support of all 50 Democrats, including swing-voting Sen. Joe Manchin (D-W.Va.), Jackson will likely be unable to receive majority support and win the confirmation battle.