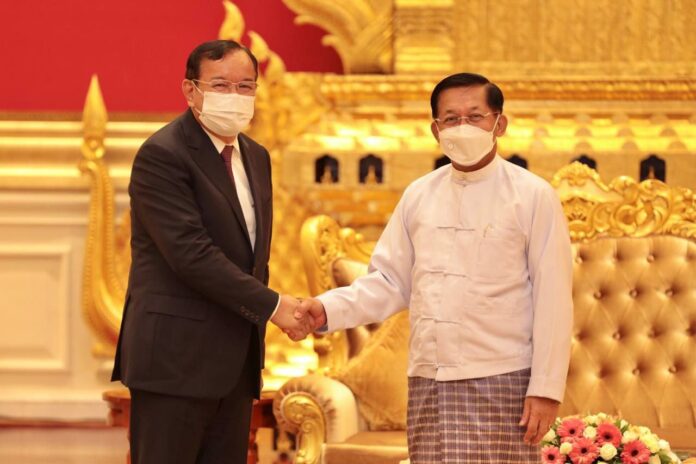 Association of Southeast Asian Nations (ASEAN) envoy Prak Sokhonn arrived in Naypyidaw Monday with the stated goal of quelling violence in Myanmar during his first official visit, but observers have questioned his commitment after learning he will not be meeting with the junta’s opposition.

Prak Sokhonn, who is also the foreign minister of Cambodia, ASEAN’s rotating chair, met with junta chief Snr. Gen. Min Aung Hlaing and his deputies to discuss the situation in the country shortly after touching down in the capital, the military regime said in a statement. Talks also focused on the implementation of the Five-Point Consensus to resolve Myanmar’s political crisis the military regime had agreed to during an emergency ASEAN meeting in April 2020, as well as ties between the bloc and the junta and issues related to humanitarian assistance, the statement said.

A press release issued last week by Cambodia’s Ministry of Foreign Affairs said that Prak Sokhonn’s two-day visit is “aimed at creating a favorable condition leading to the end of violence as well as the utmost restraint by all parties; distributing humanitarian assistance … and encouraging the political consultations/dialogues among all parties concerned.”

As part of that mission, the envoy had been scheduled to meet with Su Su Lwin, the wife of former President Htin Kyaw and a member of the deposed National League for Democracy (NLD) for Yangon’s Thongwa township, as well as representatives from other political parties.

However, an NLD lawmaker in Yangon with close ties to Su Su Lwin told RFA’s Myanmar Service on Monday that she had abruptly canceled their meeting, citing health reasons, in what appeared to be a backtrack by the party. The lawmaker, who spoke on condition of anonymity, said that it was “not the NLD’s intention” to meet with Prak Sokhonn in the first place.

Su Su Lwin is the daughter of late NLD Central Executive member U Lwin and had won a parliamentary seat in Myanmar’s November 2020 general election to represent the party in Thongwa before it was deposed in a Feb. 1 military coup the following year.

Kyaw Htwe, a member of the NLD’s Central Working Committee, told RFA that only party chief Aung San Suu Kyi can speak on its behalf. The Nobel Peace Prize winner and one-time democracy icon now languishing in prison, facing a raft of charges by the junta.

“Among the five common agreements of ASEAN is a dialogue with the right people,” he said, referring to the stipulations of the Five-Point Consensus. “There will be no beneficial results unless talks are held with Aung San Suu Kyi, who is still the current state adviser to the NLD that won the elections to truly represent the people.”

The junta claims the February 2021 coup was justified because the NLD used voter fraud to orchestrate a landslide victory at the polls but has yet to present evidence of its allegations. Security forces have killed at least 1,687 people in the 13 months since and arrested more than 9,770, mostly during peaceful anti-junta demonstrations.

“The ASEAN chairmanship seems to be showing a bit of favor to the junta in Naypyidaw,” he said. “Not meeting with the NLD, and instead meeting with someone only the junta agrees to — these are just acts of bullying that they are doing to the people in the current situation. It’s nothing surprising.”

Also missing from Prak Sokhonn’s agenda is a sit-down with Myanmar’s shadow National Unity Government (NUG), which said in a statement Monday that it had reached out to the envoy’s office ahead of his visit to set up a meeting and that the offer stands, despite having received no response. The statement also called on Prak Sokhonn to meet with Aung San Suu Kyi and deposed President Win Myint, who is also in jail facing charges, “as required by the Five-Point Consensus.”

However, in an interview on March 18, Zaw Min Tun said the envoy would not be allowed to meet with those who the junta had designated members of a “terrorist organization,” in an apparent reference to the NUG.

“No government has allowed [state guests] to meet those who have been declared terrorists,” he said, adding that “we are not the only government in the world [to do this].”

In September, Duwa Lashi La, interim president of the then five-month-old NUG, declared a nationwide state of emergency and called for open rebellion against junta rule, prompting an escalation of attacks on military targets by various allied pro-democracy paramilitary groups and ethnic armed organizations.

The military is now entangled in a rat’s nest of conflicts in the country’s remote border regions and reports have surfaced of troops looting and burning villages they say harbor anti-junta fighters, as well as detaining, torturing, raping and killing the civilians who live there.

‘Nothing will come of it’

Other stakeholders in Myanmar outright objected to Prak Sokhonn’s visit.

The General Strikes Coordination Body (GSCB) of 36 activist organizations on Sunday issued a statement condemning ASEAN and its envoy for failing to demand an immediate end to the junta’s “atrocities,” and dismissing his visit as “disrespectful.”

Ashin Rajadhamma, a GSCB representative and a member of the Buddhist Mandalay Sangha Union, told RFA that if Prak Sokhonn does not meet with “leaders represent the voices of the people, there is no meaning to these meetings at all.

“This is why we issued a statement,” he said. “His visit will not include an accounting of the demands of the people, and nothing will come of it. That’s why we don’t trust these meetings.”

Political analyst Sai Kyi Zin Soe said that even if Prak Sokhonn was to ensure that he meets with all parties, an end to the violence in Myanmar is unlikely given the current situation.

“Can he really [guide] all stakeholders to stop [the violence]? It all depends on how well he can set out on a path to satisfy everyone,” he said.

“In the current situation, all he can do is to talk about the need to stop the violence. But I don’t think he would be able to convince all the groups to accept that.”