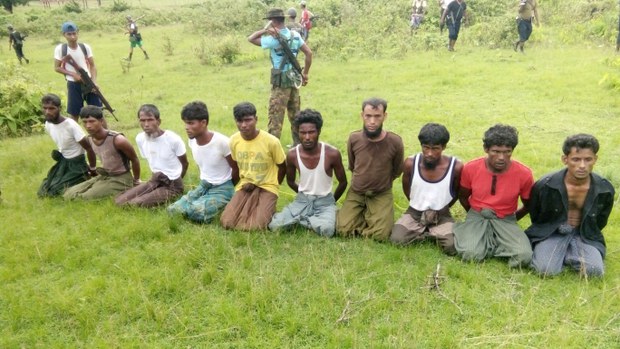 The United States is set on Monday to declare as a genocide the Myanmar military’s 2017 deadly crackdown against the Rohingya Muslim minority that killed thousands and forced an exodus to neighboring Bangladesh, news agencies reported.

Human rights activists and a U.S. lawmaker Sunday welcomed the move as overdue and essential for stepping up pressure on the military, and making it accountable for crimes against humanity. According to U.S. investigators, the military was responsible for atrocities including mass killings, gang rapes, mutilations, crucifixions, and the burning and drowning of children.

The announcement will be made Monday morning by U.S. Secretary of State Antony Blinken during an event at the U.S. Holocaust Memorial Museum in Washington, D.C., AP and Reuters reported, citing unnamed U.S. officials. The State Department did not immediately respond to request for comment Sunday.

“Not only does this designation place greater scrutiny on the actions of a military that continues to terrorize huge parts of the population, but [it] lets the Rohingya know that their voices have been heard amid the cruel suffering they continue to endure,” Tun Khin told RFA.

“It ensures continued international attention on the plight of the Rohingya, who are still the victims of genocidal acts inside Myanmar, while enabling the United States to enhance its diplomatic and economic pressure on the Myanmar military to shift its behavior, to end the violence against the people, and put the country back on the democratic path.”

In 2018, U.N. investigators found that Myanmar’s military carried out mass killings and gang rapes of Muslim Rohingya with “genocidal intent.” The rights group Doctors Without Borders has estimated that at least 6,700 Rohingya died in the 2017 crackdown. But to date, the U.S. government has described it as “ethnic cleansing” – not using the “genocide” designation, which carries more legal weight.

Under Article 2 of the 1948 United Nations Convention on the Prevention and Punishment of the Crime of Genocide, genocide is defined as “acts committed with intent to destroy, in whole or in part, a national, ethnical, racial or religious group.”

“The U.S. genocide declaration is a welcome and profoundly meaningful step,” Daniel Sullivan, the group’s deputy director for Africa, Asia, and the Middle East, said in a statement.

“It is also a solid sign of commitment to justice for all the people who continue to face abuses by the military junta to this very today.”

The atrocities of 2017 were committed during the tenure of the civilian government of Aung San Suu Kyi, who in December 2019 defended the military against allegations of genocide at the International Court of Justice in The Hague. The Nobel Peace Prize winner and one-time democracy icon now languishes in prison. She was toppled by the same military in its Feb. 1, 2021 coup.

Myanmar, a country of 54 million people about the size of France, recognizes 135 official ethnic groups, with majority Burmans accounting for about 68 percent of the population. The Rohingya ethnicity is not recognized.

The Rohingya have faced decades of discrimination in Myanmar and are effectively stateless. They have been denied citizenship. Burmese administrations have refused to call them “Rohingya” and instead use the term “Bengali.”

The 2017 crackdown was triggered by attacks by a Rohingya insurgent group attack on police outposts in Myanmar’s Rakhine state, leading to a disproportionate military response that caused about 740,000 Rohingya civilians to flee to neighboring Bangladesh – what the military and Aung San Suu Kyi, then the civilian ruler of Myanmar, called a “clearance operation.”

But a State Department-commissioned investigation by Public International Law & Policy Group found that the Rohingya were in a highly precarious situation in the months and years leading up to the attacks on the police stations and their situation was fast deteriorating, according to Daniel Fullerton, who managed the probe.

“The collected data revealed years-long patterns of gradually worsening violence and widespread human rights violations targeted against the Rohingya, which began to dramatically increase in severity and frequency in the year leading up to the major attacks of 2017,” Fullerton said in testimony at a U.S. Commission on International Religious Freedom hearing last May.

The military’s retributory attacks for the Rohingya insurgents’ assault on police posts was swift –and brutal.

“While this determination is long overdue, it is nevertheless a powerful and critically important step in holding this brutal regime to account,” Merkley said in a statement.

“Such processes must always be carried out objectively, consistently, and in a way that transcends geopolitical considerations.”

In 2017, Merkley led the first congressional delegation to Myanmar and Bangladesh to investigate the Rohingya genocide.

“I left that trip convinced that there was overwhelming evidence that the Burmese junta had committed genocide, and committed to ensuring the U.S. recognize it as such,” he said.

He said the United States must continue working to impose “clear and steep costs for these atrocities” by the Myanmar military.

“America must lead the world to make it clear that atrocities like these will never be allowed to be buried unnoticed, no matter where they occur,” he said.

“America must never stay silent in the face of grave human rights abuses—and we must make it undeniably clear that when a government systematically persecutes its people and robs them of their basic human rights, there will be consequences.”