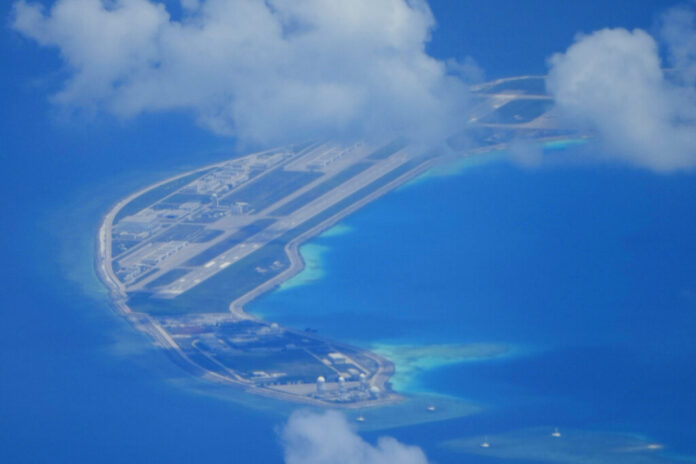 China has fully militarized at least three of its artificial islands in the South China Sea, equipping them with missile systems and fighter jets, a top U.S. commander has said.

The Associated Press quoted U.S. Indo-Pacific commander Adm. John C. Aquilino as saying on Sunday that the construction of missile arsenals, aircraft hangars, radar systems and other military facilities at Mischief Reef, Subi Reef and Fiery Cross “appeared to have been completed.”

“They threaten all nations who operate in the vicinity and all the international sea and airspace,” he added.

This is in stark contrast to Chinese President Xi Jinping’s reassurance that China would not militarize the islands.

Beijing has developed at least seven artificial islands in the South China Sea, creating 3,200 acres of new land since 2013, according to the Asia Maritime Transparency Initiative at the Washington-based Center for Strategic and International Studies.

This is the first time U.S. officials have mentioned the deployment of Chinese fighter jets to the islands as according to Greg Poling, AMTI’s director, “no one has ever spotted fighter jets in the Spratlys so far as we know.”

In 2015, during a visit to the White House, Xi said: “Relevant construction activities that China are undertaking in the island of South — Nansha (Spratly) Islands do not target or impact any country, and China does not intend to pursue militarization.”

Xi also said that China is “committed to maintaining peace and stability in the South China Sea.”

Aquilino told AP that “over the past 20 years we’ve witnessed the largest military buildup since World War II by the PRC.”

“They have advanced all their capabilities and that buildup of weaponization is destabilizing to the region,” he said.

He also said that any military and civilian plane flying over the disputed South China Sea “could easily get within range of the Chinese islands’ missile system.”

China has yet to respond to Aquilino’s statement in the report but Beijing has said that it is committed to “managing differences and disputes through dialogue, and addressing disputes through negotiation, consultation, and peaceful manner, and exploring ways to achieve mutual benefit through cooperation.”

Six parties including Brunei, China, Malaysia, the Philippines, Taiwan and Vietnam hold competing claims to the South China Sea, but China’s claims are the most expansive.

An international tribunal in 2016 rejected China’s claims but Beijing refused to accept the ruling.

Meanwhile in China, the Hainan Maritime Safety Administration on March 19 issued a new navigation warning banning ships from entering an area in the Gulf of Tonkin for 20 days, until April 9, due to military exercises.

This area was already closed for live-fire drills from March 4 to March 15. The Taiwanese intelligence agency said on March 10 that the closure might have been for the Chinese military to carry out search-and-rescue for an aircraft which reportedly crashed in the sea earlier this month.

China has not acknowledged any plane crash.

China’s Foreign Ministry replied, saying that “it is reasonable, lawful and irreproachable for China to conduct military exercises on its own doorstep.”

Vietnam and China reached an agreement to demarcate their share of most of the Gulf of Tonkin in 2000 but their negotiation on the mouth of the gulf has stagnated.

Taiwanese intelligence officials have warned that as the world is focused on the war in Ukraine, China is taking advantage of the situation to “test the limits of the U.S. and other South China Sea claimants.”