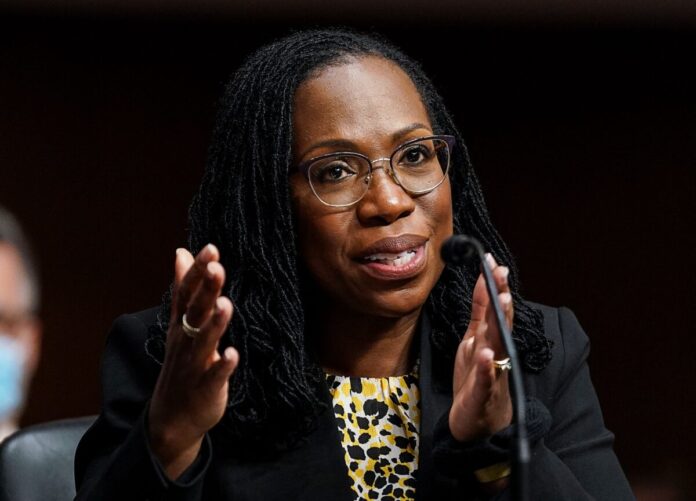 As hearings got underway for Ketanji Brown Jackson, President Joe Biden’s pick to replace outgoing Justice Stephen Breyer, Republicans pushed for a stricter approach to interpreting the Constitution while Democrats, who have historically supported a looser interpretation, pushed for a less textually limited approach.

Republicans have long warned against the danger of justices “legislating from the bench,” using their role in the judiciary to effectively make new laws rather than leaving that power to Congress.

Supporters of a stricter interpretation of the Constitution have pointed to cases like Roe v. Wade as an example of such overreach of power. In that case, the Supreme Court effectively barred states from outlawing abortion in the first trimester and required that states not impose significant hardships to citizens in their state receiving an abortion.

These and other instances have been pointed to by those in favor of a stricter interpretation of the Constitution as examples of overreach of authority by the court.

“The most important thing I look for is a nominee’s view of the law, judicial philosophy, and view on the role of a judge in our constitutional system,” Grassley continued

Grassley explained that he, like several other Republicans on the committee, wants a nominee who interprets the Constitution “as it was originally understood,” not a judge who will use their position “to make new law,” which Grassley emphasized was a prerogative reserved to the legislative branch.

On the other side of the ideological aisle, Grassley said, are those who “believe the courts should make policy,” and believe in a “living constitution.”

Proponents of such a loose interpretation of the Constitution, Grassley said, “believe the Founders intended to hide elephants in mouse holes. With a bit of creativity, these judges can always find that elephant.”

Grassley argued that this interpretation allows judges far too many options to legislate from the judicial bench, bypassing the process of compromise, give-and-take, and negotiation that defines the legislative branch.

In his opening statement, Senate President Pro Tempore Patrick Leahy (D-Vt.) briefly rejected the notion that Jackson would use her power as a Supreme Court justice to overrule the legislature.

In the past, Democrats in favor of a broader interpretation of the Constitution have pointed to cases like Brown v. Board of Education—a landmark case that ended racial segregation in public schools—as examples of why a more expansive view of the Constitution is necessary in litigating.

According to proponents of a less textually-restrictive view of the Constitution, justices in Brown v. Board had to rely on a greatly-expanded interpretation of the law and of the Constitution to overturn racial segregation, which had previously been upheld as constitutional in the late 19th century case Plessy v. Ferguson.

Others have made the case that the Constitution is faulty or doesn’t fit the modern world, and therefore require a less strict understanding of the document.

“In practice the promises made in the plaint text of our Constitution are still too often broken,” Ossoff said. “The court remains essential to that national process of becoming in real life what America is in text.”

During her own remarks, Sen. Amy Klobuchar (D-Minn.) also discussed the issue, but offered a far more expansive vision of how the Constitution should be treated.

In past confirmation battles, Klobuchar has advocated for a far less strict view of how the Constitution should inform the judiciary. On Monday, Klobuchar expressed a common position among Democrats, calling for the Supreme Court to update the Constitution to suit modern conditions.

“This is a time for us to consider the Supreme Court’s place in our democracy and how it impacts people,” said Klobuchar.

Klobuchar approvingly cited a past statement by Justice Breyer in which he said the court “can and should interpret the Constitution in a way that works for the people of today.”

During her hearing, Jackson denied having any bias toward one position or the other.

“I decide cases from a neutral posture,” Jackson said on Monday. “I evaluate the facts, and I interpret and apply the law to the facts of the case before me, without fear or favor, consistent with my judicial oath.”

“I know that my role as a judge is a limited one, that the Constitution empowers me only to decide cases and controversies that are properly presented,” she continued.

Her judicial philosophy, she added, “is further constrained by careful adherence to precedent.”

Specifics about Jackson’s judicial philosophy are expected to be explored in greater depth over the next several days.