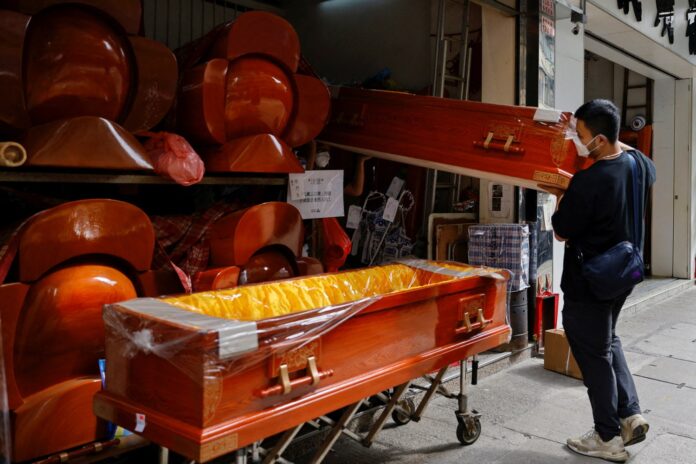 Hong Kong leader Carrie Lam on Monday said the city would lift some flight bans and stall plans for compulsory mass testing favored by the ruling Chinese Communist Party (CCP), as the city ran out of coffins amid spiraling COVID-19 deaths.

Lam said the new rules would allow Hong Kong residents stranded in those countries to get home sooner, but added that they will still have to undergo quarantine on arrive.

“We’re not relaxing measures on inbound control,” Lam said. “We’re just straightening out the arrangements, to allow many Hong Kong residents stranded in these nine countries to return in a gradual and orderly manner.

“The prevention and control measures when they get here will be more stringent than many places.”

Meanwhile, the government will relax social distancing requirements, allowing some businesses to reopen from April 21 in the absence of a further wave of COVID-19 infections, she said.

The move comes as the city’s health authorities confirmed that a total of 11,103 COVID-19 patients are currently being treated in public hospitals. The city has has reported more than a million infections and nearly 5,700 deaths since the omicron COVID-19 outbreak began in December 2021.

Lam said it was too soon to relax all public gathering restrictions, however.

Morgues are overflowing and there is a shortage of coffins.

The city’s food and environmental hygiene department said some 1,700 coffins had arrived in Hong Kong via sea and land by March 20, while crematoria would keep running during the annual grave-tending festival of Ching Ming on April 5, which is generally a public holiday.

Lam said her government will be stepping up its vaccination program in the coming weeks, adding that the mass testing program was being suspended after consulting with mainland Chinese medical experts, who concluded that Hong Kong doesn’t have the same capacity for social control via local neighborhood committees as the CCP does.

“We need to ensure the right timing for mass compulsory testing, because there will be a lot of people inconvenienced by the whole process,” Lam said, adding that the best time to do mass testing was either at the start or the end of an outbreak.

She said limited compulsory testing combined with overnight mandatory lockdowns of residential blocks or communities will continue as before.

Stringent travel restrictions imposed since 2020 have taken their toll on local and international businesses, as well as creating mental health issues as large sectors of the economy are shut down, with lower-income families bearing the brunt of the restrictions.

Lam said schools would reopen for in-person teaching after the Easter break, on April 19, with public venues including sports facilities would follow suit two days later.

“We … need to take account of the social and economic impacts [of these restrictions],” she said.

According to an analysis of 5,167 cases by the Hospital Authority obtained by the Ming Pao newspaper, more than 70 percent of those who died hadn’t been vaccinated at all, while 87 percent of the vaccinated dead had received the Chinese-made Sinovac vaccine.

“The poor protection offered by the Sinovac jab is one of the reasons the outbreak in Hong Kong is out of control,” Taipei thoracic surgeon Su Yi-feng told RFA.

Studies have shown that the protection offered by the jab wanes rapidly, with neutralizing antibody levels at just 16.7 percent, six months after vaccination.

Former public doctors’ union leader Arisina Ma, now based in the U.K., said lack of public trust in Chinese-made vaccines, the only ones available to the public, was likely behind the low vaccination rate.

She said there are also public concerns about the use of imported mRNA vaccines like Pfizer and Moderna, yet the government has never ordered recombinant protein vaccines made by Novavax and Medigen of Taiwan.

“Some people worry that mRNA vaccines could affect their genes, so the recombinant vaccines should ease their concerns,” Ma told RFA. “I could be hard for them to get through to other sectors of the population without offering them.”

Hong Kong has one of the best-performing public healthcare systems in the world, raking eighth overall in the 2021 World Healthcare Innovation Index in 2021.

Yet its COVID-19 deaths have surpassed the officially recorded deaths in the early days of the pandemic in the central Chinese city of Wuhan.