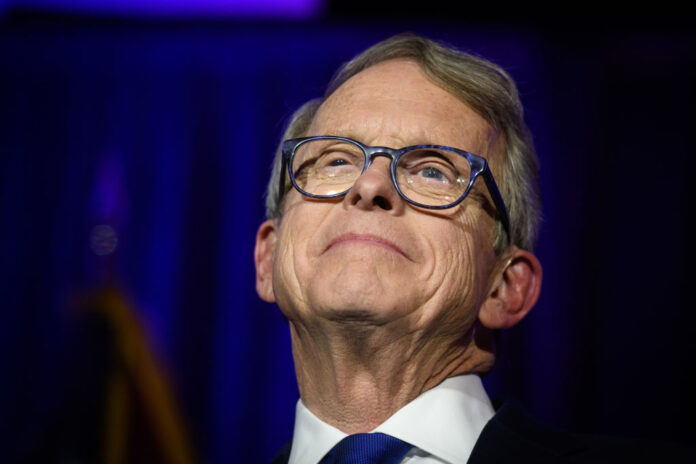 It was a contentious weekend for Ohio political races.

Then, late morning on March 19 GOP gubernatorial candidate Joe Blystone approached Ohio Gov. Mike DeWine at a beef expo in Columbus asking him, “Why won’t you debate me?”

Video shows a flustered DeWine placing his hand on Blystone’s arm and uttering a comment before Blystone brushed away DeWine’s hand and the governor was whisked away by security.

The video was not accompanied by sound, but after DeWine put his hand on Blystone’s arm the Canal Winchester farmer and restaurant owner alleges the governor said, “I’m going to kick your ass.”

Ran into Mike DeWine yesterday and asked why he wouldn’t debate. He tried to grab me and threatened to “kick my a$$” after I wouldn’t talk in private. There’s nothing I’d say to him in private that I wouldn’t say right there. His security & I had a laugh over it at the end. pic.twitter.com/CFJex8KHSL

The Ohio Debate Commission organized four candidate forums at Central State. U.S. Senate Republicans and Democrats are scheduled to take the stage in their own debates on March 28. All Senate candidates who were invited have said they will be there.

Former Dayton mayor Nan Whaley and former Cincinnati mayor John Cranley are opponents in the Democratic Party gubernatorial primary. They will appear at a debate on the evening of March 29.

Blystone, DeWine, Hood, and Renacci were invited to participate in the GOP gubernatorial debate on the afternoon of March 29. DeWine declined.

When learning that the governor would not attend, Renacci said no. Hood did not respond to emails and calls from the ODC.

Blystone told The Epoch Times that he would “attend the debate even if I am the only person on that stage.”

“What’s happened with the GOP candidates and the governor’s race is disappointing,” ODC board president Dan Moulthrop said. “When the incumbent chooses not to debate, it’s not surprising that others in the race have less incentive to do so as well.”

Blystone recorded a video moments after the conversation with DeWine.

Lots of dung being thrown around at the beef expo – including a threat from Mike DeWine “to kick my ass.” Why won’t DeWine debate me? What do you think?#hireafarmer #HireAVeteran – not a politician.#VoteBlystoneMay3rd #live #blystonelive #blystoneforgovernor pic.twitter.com/FxRMPECOsm

The first-time political candidate told The Epoch Times that he was unaware that the governor would appear at the expo.

“A voice on the loudspeaker announced that he [DeWine] was there, so I decided to approach him and ask him why he won’t debate me,” Blystone said. “He said that everyone knows where he stands on his policies.

“He then told me, ‘Let’s go over here and talk.’ I said, ‘No, all these people want to hear what you are saying. Are you a coward?’” Blystone added. “That’s when he put his hand on my arm and told me, ‘I’m going to kick your ass.’ Then a man who was with him quickly took him away.”

The video of the confrontation that emerged on Sunday shows DeWine and Blystone talking, DeWine placing his hand on Blystone’s arm and expressively saying a comment, Blystone brushing off DeWine’s arm, and DeWine being escorted away. It is unclear what was said because the video does not have sound, but DeWine is visibly agitated.

The Epoch Times reached out to DeWine’s campaign manager, Brenton Temple, but the phone call was not returned. A comment Temple made last week mirrored what Blystone says DeWine told him.

“Mike DeWine is the most publicly accessible Governor in Ohio history,” Temple said. “Governor DeWine meets with constituents on a daily basis and regularly takes questions from the media. Ohioans know where he stands on the issues and that he is fighting and winning for them.”

A poll by The Hill/NBC4i/Emerson College that was conducted Feb. 25 to Feb. 26 showed DeWine at 34 percent support followed by Blystone (20 percent), and Renacci (9 percent). Thirty-six percent are undecided.

The survey also showed that 45 percent of voters approve of DeWine’s job as governor while 37 percent disapprove, and 18 percent are neutral or have no opinion.

“One hour with four people—I’m not sure it really adds a whole lot to what the public knows about Mike DeWine or public policy debate,” DeWine said last week. “It might be an entertaining hour—not sure how productive an hour it would be.”

Renacci said he will take the stage in any debate that the governor attends, and he criticized DeWine’s refusal to participate on March 29.

“A gubernatorial debate without the governor is not a gubernatorial debate,” Renacci said. “As I’ve said repeatedly, Ohioans deserve far better than this—and that’s why I’m committed to defeating DeWine and delivering the accountable conservative leadership we desperately need.

“Mike DeWine has spent his term governing like a blue state liberal—shuttering our economy, irreparably harming our kids’ access to education, trashing Donald Trump, and turning Ohio into ground zero for public corruption. And now he’s refusing to answer for any of it,” Renacci added.

“I’m not surprised he’s terrified to debate me. But what does shock me is that Governor DeWine thinks so little of the countless Ohio families whose lives he’s harmed, futures he’s ruined, and businesses he’s destroyed, that he won’t even take the debate stage to attempt to justify it—let alone apologize for it.”

In a press release, Renacci’s campaign outlined questions the former Congressman would like DeWine to answer:

“Do you believe there was substantial voter fraud in the 2020 election? Why do you always avoid answering this question?”

“Why are you refusing to do anything to help Ohioans weather the gas-price crisis?”

“Why is Ohio ranked as one of the least competitive states in the entire country after four years of your leadership, and why is our state lagging behind other Republican-led states in job creation?”

“Why do you have ‘no regrets’ about the hundreds of thousands of jobs you killed by bucking President Trump’s guidance and locking down Ohio?”

Blystone blasted both DeWine and Renacci for declining to attend the ODC debate.

“You’re asking for Ohioans to support you and vote for you, but you are not willing to get on a stage and debate.

“I was hoping we could present our platforms to Ohio while also discussing issues,” Blystone added.

“The people deserve to have a leader who will face them. We deserve better. Patriots. Not politicians.”