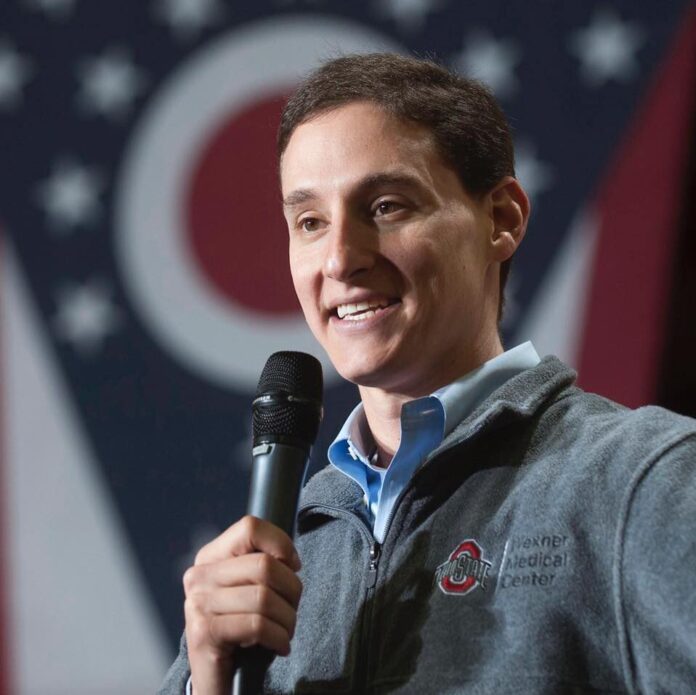 The aftermath of an on-stage altercation that saw GOP U.S. candidates Mike Gibbons and Josh Mandel nose-to-nose at a forum in suburban Columbus on March 18 continued over the weekend and spilled into March 21.

Mike Gibbons and Josh Mandel get in each other’s faces at tonight’s GOP #OHSen forum hosted by FreedomWorks.

Mandel and Gibbons were seated next to each other on the stage. After Mandel delivered his answer to the moderator’s first question and ended by attacking Gibbons’ business dealings in China, Gibbons stood up to speak.

Moments later, Gibbons told Mandel, “You might not understand this cause you’ve never been in the private sector in your entire life,” and Mandel jumped from his chair, stood face-to-face with Gibbons, and shouted “I’ve worked sir. Two tours in Iraq. Don’t tell me I haven’t worked.”

The moderator intervened to separate the pair, but the tension escalated.

Mandel reiterated that he served two tours in Iraq.

“Back off, buddy or you’re going to end up—,” Gibbons said, not completing the sentence. “You’re dealing with the wrong dude.”

“You back off,” Mandel snapped.

The incident seemed to have a negative impact on Mandel and Gibbons among audience members. After the forum ended, FreedomWorks conducted a straw poll of the 400 people in attendance that showed Mandel in last place with 5 percent and Gibbons in third at 43 percent. Vance was the winter with 43 percent.

Vance encouraged Gibbons and Mandel to sit down as the fracas reached an end. When it was his turn to speak a few minutes later, Vance admonished Mandel.

“The way you use the U.S. Marine Corps is disgraceful. It’s not a political football for you to toss around,” Vance said.

“Think about what we just saw. This guy wants to be a U.S. senator, and he’s up here saying ‘Hold me back, hold me back, I got two tours in the Marine Corps.’

“What a joke. Answer the question. Stop playing around.”

In a statement after the debate, Vance called the conduct of Gibbons and Mandel “embarrassing” and added, “While others made a mockery of themselves with their phony tough guy antics, I focused on engaging with the voters, honing in on the real problems that Ohioans face and providing true solutions that may make life better for working and middle-class Americans.”

On March 21, a group of 15 U.S. veterans wrote an open letter supporting Mandel and saying they were “disgusted beyond belief” at Gibbons’ comments.

“Gibbons owes Josh and all veterans and those currently in the service an apology, implying that ‘we’ who served our country honorably and faithfully, never earned our way working in the private sector,” the veterans wrote.

“We all volunteered to serve our country away from our families, putting our lives in danger, so people like Mike Gibbons could make millions.”

Gibbons and Mandel were among the U.S. Senate candidates at a Northeast Hamilton County Republican Club breakfast the morning after the March 18 debate.

“I brought in my old boxing coach and we went in a few rounds this morning,” Gibbons jokingly said at the event.

After the breakfast, Mandel told the Cincinnati Enquirer, “I’m a Marine, and I’m a fighter, and I’ll never back down from a fight. And I have no problem standing up to the squishy establishment Republicans.”

When he was asked if he would do it again, Mandel told the Enquirer, “Of course.”

On March 21, Gibbons appeared on Always Right with Bob Frantz, a Cleveland-based talk show in his first interview about the tussle with Mandel.

Frantz played the audio recording from the debate, and Gibbons responded.

“It’s the first time I’ve heard that. I don’t remember any of that interchange because frankly, I was thinking, I’m here running for office because I love America and want to help fix things, and I have a guy charging me and looks like he is going to punch me, and what do you do in front of 500 people when someone is going to punch you.

“I have never encountered that before,” Gibbons said.

“He didn’t just walk up and stand there. He put his chest in mine, and the way I grew up, that is a challenging situation,” Gibbons added.

Gibbons admitted he asked himself what he should do when Mandel was face-to-face.

“It was a total shock to have that kind of thing happen on a stage where you are doing a pretty serious thing, a pretty important thing. He has issues. There is no doubt about it,” Gibbons said.

“I had not had an acrimonious relationship. He is a nice guy, at least I thought he was.

“This was the first time on stage in a debate when I am running away from him in the polls,” Gibbons said.

“He is a bit unhinged. I’m not sure he is the type of person who should represent this state.”

The survey indicated that 24 percent of voters are undecided. Many supporters of Vance (66 percent), Mandel (64 percent), and Gibbons (62 percent) said that they could change their mind before the primary, which is currently slated for May 3.

A poll conducted by The Hill/NBC4i/Emerson College in late February also placed Gibbons in first place with 22.4 of the support, followed by Mandel (14.9 percent), Vance (7.7 percent), Dolan (6.2 percent), and Timken (5.7 percent).

These poll results were a dramatic change from previous surveys, all of which had showed Mandel in the lead.

Gibbons, Mandel, Vance, Timken, and Dolan are expected to participate in an evening televised debate on March 21 in Cleveland. Gibbons told Frantz that he does not anticipate the March 18 level of fireworks tonight.

“We haven’t gotten any polling data, but I have to believe his [Mandel’s] behavior is not bringing in a lot of new votes,” Gibbons said. “I would hope he would behave like a gentleman.”

Mandel also spoke on March 21 and defended his response at the FreeedomWorks forum.

“He [Gibbons] has the audacity to say that serving in the military is not a real job. That is outrageous. I’m going to get in the face of anyone who says that every time,” Mandel said.

“There is no personal animosity. Facts are facts, and the voters of Ohio have a right to know he made millions taking American jobs and sending them to China.”

There are multiple debates scheduled leading up to the May 3 primary. Mandel would not promise a lack of fireworks.

“I don’t have a dial-down mode,” Mandel said. “I’m in fighter mode all the time.”