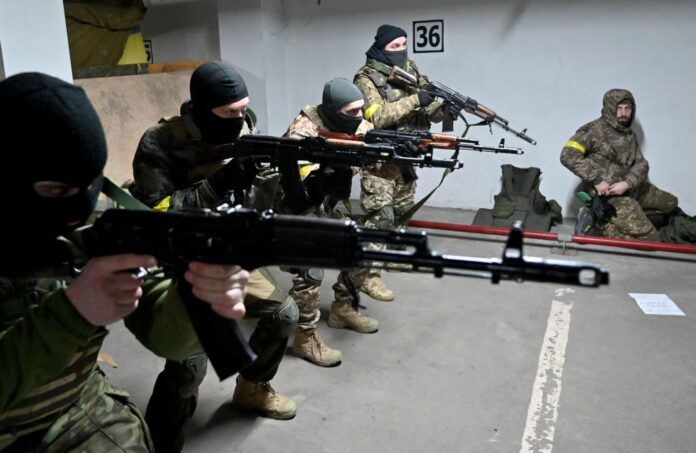 A Florida gunmaker called KelTec is sending 400 semi-automatic rifles to Ukraine to help civilians fend off the Moscow-led invasion after a longtime customer to the company placed an order and then disappeared.

Adrian Kellgren, founder of the family-owned firearms developer and manufacturer, told The Associated Press in a March 18 report that he was left holding a $200,000 shipment of semi-automatic rifles after the Ukrainian customer, who lives in Odessa, placed an order.

Odessa, a strategically important port city in southern Ukraine with a population of nearly one million, has been heavily fortified in recent days in preparation for a possible Russian attack.

Since the Kremlin’s invasion of Ukraine on Feb. 24, Kellgren said he has been unable to contact the customer.

Rather than let the stranded batch of 9 mm foldable rifles go to waste, KelTec—which employs about 300 American citizens—is sending them to Ukraine’s civilian resistance movement to help them fend off attacks from Russia’s military.

“The American people want to do something,” Kellgren, a former U.S. Navy pilot, told the AP. “We enjoy our freedoms, we cherish those things. And when we see a group of people out there getting hammered like this, it’s heartbreaking.”

Kellgren said he was able to connect with a diplomat in the Ukrainian Embassy via a Ukrainian neighbor and secure a federal arms export license in just four days, a process that can typically take months due to the complex amount of red tape involved with the international shipment of arms.

The guns were sent off to be delivered to an undisclosed NATO-run facility and from there, Ukraine’s Ministry of Defense will be responsible for distributing them to resistance forces fighting in the country, according to the AP.

The Epoch Times has contacted Ukraine’s Ministry of Defense for comment.

Kellgren’s decision to send the rifles to Ukraine comes after the country’s President Volodymyr Zelensky told Ukrainian citizens that anyone aged 16 to 60 cannot leave the country, and he urged them to take up arms to fend off Russian attacks.

Zelensky has also warned that Russia is preparing to bomb Odessa, which he said will be a “war crime … a historical crime.”

Kellgren said he hopes to plan more shipments in the future, according to the AP. He noted that KelTec’s license allows the export of up to 10,000 weapons and that the company has offered to provide the Ukrainians with their own production line as well as weekly shipments.

The Florida gunmaker is not the only company attempting to supply Ukraine with weapons amid the ongoing conflict.

Another company in the same state, Adams Arms, earlier this month posted a video on social media of a batch of rifles that it said was “another Ukrainian shipment getting ready [to] ship out.”

“A lot of brands throw their rifles out of helicopters to demonstrate durability, ours go to war,” the company said.

Colorado Gov. Jared Polis said in a March 14 statement that the state’s Department of Public Safety and Department of Military and Veterans Affairs had collected more than 1,000 ballistic helmets and nearly 840 complete sets of surplus body armor from more than 25 local law enforcement agencies, all of which would be sent to Ukraine.

“In the true spirit of Colorado, I am proud that Colorado law enforcement stepped up to support the brave people of Ukraine. We are doing everything we can to support Ukraine’s fight for freedom, and this surplus body armor is urgently needed to help save lives, stop Putin’s ruthless aggression, and save Ukraine,” said Polis.

Meanwhile, President Joe Biden has also vowed to send weapons to Ukraine as well as money, food, and aid, while pledging that the United States will “welcome Ukrainian refugees with open arms.”

Last week, Biden approved $13.6 billion in emergency funding to support the people of Ukraine, which will be split between humanitarian aid and security assistance.