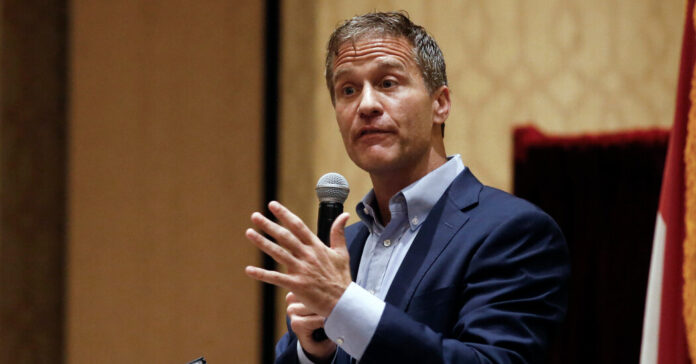 The former wife of Eric Greitens, a leading Republican candidate for the U.S. Senate in Missouri, has accused him of domestic violence, saying in court documents that he knocked her down and confiscated her keys, phone and wallet during an argument in 2018.

The allegations were detailed in documents filed as part of a child custody dispute between Mr. Greitens, an acolyte of former President Donald J. Trump, and his former spouse, Sheena Greitens.

The couple were divorced in May 2020, entering into a joint parenting arrangement through the court. They have two young sons.

In a 41-page affidavit filed on Monday in Boone County Circuit Court in Missouri, Dr. Greitens, an associate professor at the University of Texas at Austin, accused her former husband of “unstable and coercive behavior.” Mr. Greitens’s campaign denied the accusations in a statement on Monday.

Dr. Greitens said that some of the abuse occurred when Mr. Greitens became mired in a series of scandals that led to his resignation as governor in 2018.

The new accusations, which were reported by The Associated Press, cloud a political comeback by Mr. Greitens. One recent poll showed Mr. Greitens, 47, a former Navy SEAL who was once seen as a rising star in the Republican Party, leading a crowded Republican Senate field in Missouri. The outcome of the contest could determine which party emerges from the midterm election in control of the chamber.

“Prior to our divorce, during an argument in late April 2018, Eric knocked me down and confiscated my cell phone, wallet, and keys so that I was unable to call for help or extricate myself and our children from our home at Innsbrook, Missouri,” Dr. Greitens said in the affidavit.

Mr. Greitens’s behavior “included physical violence toward our children,” Dr. Greitens said, “such as cuffing our then three-year-old son across the face at the dinner table in front of me and yanking him around by his hair.”

Dr. Greitens, 39, said that the violence intensified to the point that she had begged Mr. Greitens to tell her where he was storing a firearm he purchased in January 2018.

“In the spring and early summer of 2018, Eric repeatedly threatened to kill himself unless I provided specific public political support to him,” she said.

In a statement released on Monday, Mr. Greitens’s campaign denied the allegations and said that they were politically motivated.

Dr. Greitens, the campaign’s statement said, “is engaged in a last-ditch attempt to vindictively destroy her ex-husband.”

Senator Josh Hawley, Republican of Missouri, called on Mr. Greitens to quit the race on Monday.

“If you hit a woman or a child, you belong in handcuffs, not the United States Senate,” Mr. Hawley said on Twitter. “It’s time for Eric Greitens to leave this race.”

In May 2018, Mr. Greitens resigned as Missouri’s governor more than four months into a scandal involving a sexual relationship with his former hairdresser and claims that he had taken an explicit photograph of her without her permission. He was also accused by prosecutors of misusing his charity’s donor list for political purposes.

In March 2021, Mr. Greitens announced that he was mounting a political comeback and would run for the seat being vacated by Roy Blunt, the No. 4 Senate Republican, who chose not to seek re-election. At the time, Mr. Greitens contended that he had been “exonerated” by investigators and had resigned only for the sake of his family.