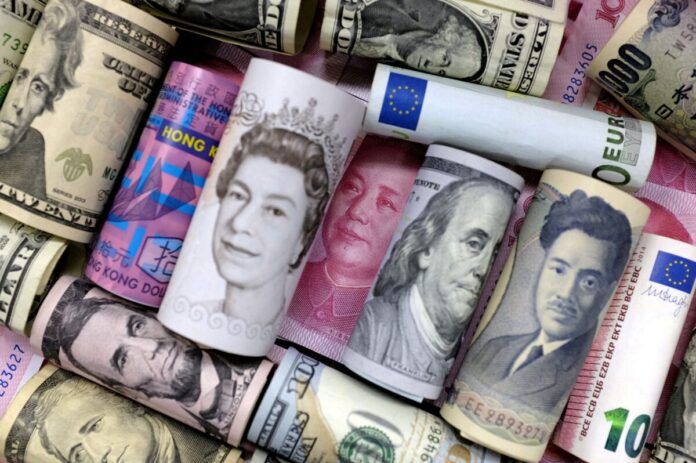 NEW YORK—The dollar was little changed versus a basket of major currencies on Monday, as investors looked toward comments from U.S. Federal Reserve Chair Jerome Powell and from a host of other Fed policymakers this week for insight on monetary policy.

The greenback had been fluctuating between slight gains and losses, and weakened slightly after comments from Atlanta Federal Reserve Bank President Raphael Bostic, who said he sees six rate hikes this year and two for 2023, a more dovish stance than most of his colleagues as he has concerns about the effects of the conflict between Russia and Ukraine on the U.S. economy.

Markets have been volatile over the past month as the situation in Ukraine has escalated, increasing the prices of commodities such as energy and putting upward pressure on already high inflation.

The Fed raised its key interest rate by 25 basis points last week for the first time since 2018 as it attempts to combat rising prices while trying to avoid a policy error which could send the U.S. economy into recession. Investors are now focused on the potential speed and size of future rate hikes.

“The Fed is really constrained only by developments [in] Ukraine, because they are afraid of a recession, now there aren’t any real recession signs out there that we have seen, but they have to be thinking about it,” said Joseph Trevisani, senior analyst at FXStreet.com.

Powell is expected to speak on Monday at the National Association for Business Economics (NABE) Annual Economic Policy Conference, at 12 p.m. EDT (1600 GMT) and is also scheduled to speak again on Wednesday.

Ukraine defied a Russian demand that its forces lay down arms in the besieged port city of Mariupol before dawn on Monday.

While many central banks around the globe have been hiking rates, with he Fed the latest to do so, the Bank of Japan on Friday maintained its massive stimulus program and held rates steady, while warning of increased risks from the Ukraine crisis to a delicate economic recovery.

That disparity has served to weaken the yen, with the Japanese currency trading near six-year lows versus the dollar despite its safe-haven status.

European Central Bank President Christine Lagarde said on Monday that the Fed and ECB will also move out of sync, as the war in Ukraine has very different impacts on their respective economies.

The Japanese yen strengthened 0.06 percent versus the greenback at 119.12 per dollar, after touching 119.40 yen on Friday, its lowest level since February 2016.