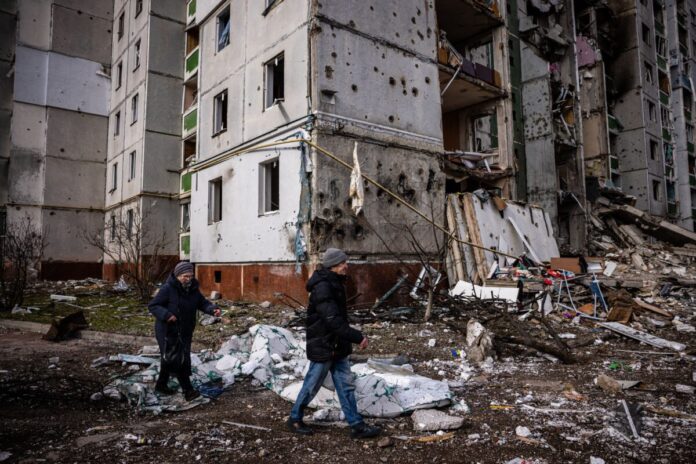 A U.S. citizen has been killed in Ukraine, a top U.S. official has confirmed.

“I can confirm that an American citizen was killed. I don’t have any more details for you than that,” U.S. Secretary of State Antony Blinken told reporters during a March 17 briefing in Washington.

“We offer our sincerest condolences to the family on their loss,” a State Department spokesperson told media outlets. “Out of respect to the family during this difficult time, we have no further comment.”

Authorities in Chernihiv, Ukraine, said earlier on March 17 on social media that a U.S. citizen was among the casualties from Russian artillery attacks “on unarmed civilians.”

Cheryl Hill Gordon, a New Mexico resident, posted on Facebook around the same time that her brother, Jimmy Hill, had been killed in Chernihiv.

“He was waiting in a bread line with several other people when they were gunned down by Russian military [snipers]. His body was found in the street by the local police,” Gordon wrote.

According to KIFI-TV, Hill had traveled to Ukraine in December 2021 so his partner, Irina, a Ukrainian citizen, could receive treatment at a local hospital for multiple sclerosis.

Karin Moseley, a family friend, told the broadcaster that, according to U.S. officials, Ukrainian police officers found Hill dead in the street.

KIFI-TV previously reported that Hill had been trapped in a hospital in the city, which is about 90 miles north of Kyiv.

Blinken told reporters that Russia “continues to attack civilian sites,” including a hospital, preschools, and a boarding school, “as well as people standing outside a building waiting in line for bread.”

“Intentionally targeting civilians is a war crime. After all the destruction in the past three weeks, I find it difficult to conclude that the Russians are doing otherwise,” he said.

U.S. President Joe Biden said this week that Russians are carrying out war crimes, and Blinken said he agrees with the assessment.

The Kremlin said Biden’s statements were “absolutely impermissible, unacceptable, and unforgivable.” Spokesman Dmitry Peskov told reporters that Biden heads a country “which has for many years bombed people across the world” so he “has no right to make such statements.”