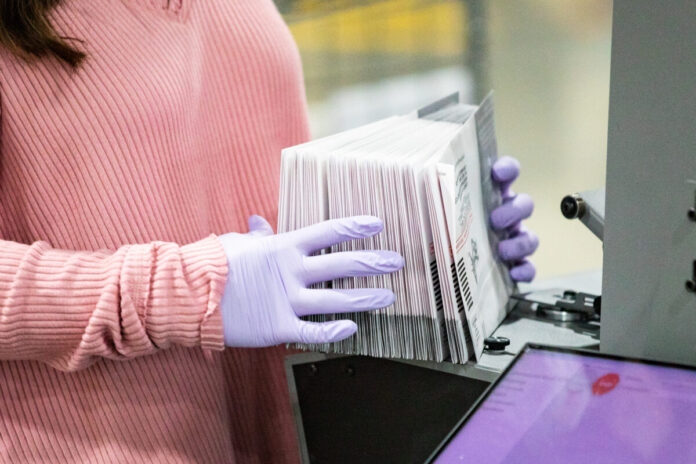 The new state law, HEA 1116, requires Indiana counties that use electronic voting machines to install “voter-verifiable paper audit trails,” or a backup system that allows people to check their votes on a paper printout before confirming their votes, before the 2024 election.

It also “provides that, after July 1, 2022, a county must meet certain requirements when using any direct record electronic voting system that does not include a voter-verifiable paper audit trail for an election,” according to the bill.

The measure also “specifies requirements of a statement that must be printed on the envelope of an absentee ballot application” and stipulates that voters will now have to provide a driver’s license number or state identification number, or the last four digits of their Social Security number when they submit an electronic request for an absentee ballot.

Meanwhile, it will require countries to have an electronic poll book that has the “capacity to transmit certain information that a voter cast a provisional ballot,” an outline of the measure said. The new law also extends a cybersecurity contract between Indiana counties and the Indiana Secretary of State’s Office until 2028.

Most of Indiana’s counties use machines made by MicroVote, Election Systems & Software, Hart InterCivic, and Unisyn, according to the Indiana government’s website. Barbara Tully, of Indiana Vote by Mail, said during a Senate Appropriations Committee hearing on Feb. 24 that 59 of Indiana’s 92 counties use MicroVote.

Holcomb, a Republican, signed the measure on March 15, while Indiana Secretary of State Holli Sullivan later praised the move.

“It also allows me and the Secretary of State’s office to better partner with our county election administrators to do post-election recounts, if needed, as well as post-election audits,” Sullivan, a Republican, said in a statement to local media outlets.

Sullivan added that she believes electronic voting machines with paper ballot backups are the “perfect blend,” adding that it allows for “quick results and the ability to do a recount that is very reliable and fast.”

The state will now provide funding for every county that needs paper backup systems by July 1 of this year.