Demand for This Toad’s Psychedelic Venom Is Booming. Some Warn That’s Bad for the Toad. 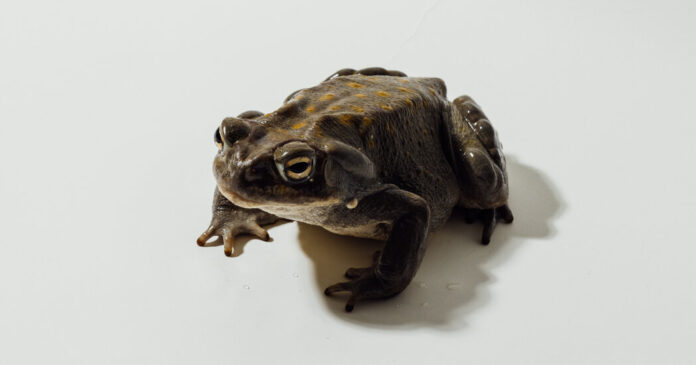 Then he smoked the venom of the Sonoran desert toad.

“I saw why they call this the ‘God molecule’ after I got a full central nervous system reset,” said Mr. Capone, 45, who now runs a nonprofit with his wife helping hundreds of other Special Operations veterans access toad medicine.

Riding the wave of greater mainstream acceptance of psychedelics for treating mental disorders and addiction, a fast-growing retreat industry is touting the potential of the toad’s secretions. People pay anywhere from $250 for a ceremony in the East Texas woods to $8,500 for a more gilded beachfront setting in Tulum, Mexico, to consume the venom.

But in a sign of the unintended consequences of the psychedelic resurgence, scientists are warning that the scramble by users to obtain the toads — involving poaching, over-harvesting and illegal trafficking in arid expanses straddling the border with Mexico — could trigger a collapse in Sonoran desert toad populations.

Toad medicine apostles are now increasingly split between those like Mr. Capone, who support using synthetic versions that are easy to produce, and purists who say they will never stop using venom collected from the toads themselves. As retreat operators tailor experiences for therapeutic, recreational or spiritual purposes, the discussions over threats to the toad are growing more contentious.

“We’re a church, and this is sacred medicine,” said Brooke Tarrer, 42, a former Texas schoolteacher who in 2015 founded the Universal Shamans of the New Tomorrow, which makes consumption of the toad venom a central feature of its practices.

Ms. Tarrer, whose church in Huntsville, Texas, charges $250 for a venom ceremony, positioned herself against what she called “Green movement people” aiming to protect the toad. “We would never go with synthetic,” she added.

The toad itself, found primarily in the Sonoran desert, which straddles parts of the southwestern United States and northwestern Mexico, is already thought to have been extirpated in California, where it hasn’t been found in the wild in decades. Authorities in New Mexico list it as threatened, citing excessive collection among factors.

The Sonoran desert toad can still be found in parts of Arizona and Sonora in northwest Mexico. One of the largest toads native to North America and remarkably long-lived with a life span reaching 20 years, it hibernates underground for most of the year, resurfacing to breed around the summer monsoon rains.

Herpetologists say the toad seems to have adapted to human-modified landscapes like irrigation ditches, suburban yards and water tanks on cattle ranches.

But risks abound. Motorists already kill many of the toads, and predators such as raccoons also target them.

When the toad is threatened, it excretes toxins strong enough to kill full-grown dogs. A substance found in these toxins, 5-MeO-DMT, can be dried into crystals and smoked in a pipe, producing an intense experience generally lasting 15 to 30 minutes, in contrast to other psychedelic substances that can involve hours of hallucinating and vomiting.

Celebrities from Chelsea Handler to Joe Rogan have smoked the venom, commonly called Five or Bufo (after the toad’s former scientific name, Bufo alvarius; it’s been renamed Incilius alvarius). As researchers start looking into the safety of 5-MeO-DMT, reports of adverse experiences are also occasionally emerging.

For instance, a photographer died in one episode in Spain in 2020 after smoking the venom. At some retreats, operators have paramedics on standby to help people who might have negative reactions.

Still, interest in Bufo is climbing, with users often calling it the “God molecule,” likening its use to a religious experience.

Bernice Anderson, 50, who goes by the Mayan name Ixca and charges $1,100 for retreats in Utah, said that smoking Bufo allows some people to feel like they are dying before returning to life.

“They will foam at the mouth, and their eyes will roll to the back of their head,” said Ms. Anderson, who does not use synthetic 5-MeO-DMT. “It’s at that point where the shamanic experience comes in. This is something that has to be carried out very carefully.”

Still, the surging demand for the Sonoran desert toad’s venom is raising alarm. Robert Villa, president of the Tucson Herpetological Society, compared the threats with those faced by Asian river turtles, which are facing extinction risks because of habitat loss and a belief that they cure ailments like cancer.

“There’s a perception of abundance, but when you begin to remove large numbers of a species, their numbers are going to collapse like a house of cards at some point,” Mr. Villa said.

Some warn that collecting the venom also places stress on the toad, a process often described as “milking,” in which a person strokes the amphibian under its chin to initiate a defensive response. The toad then releases a milky substance that can be scraped, dried and smoked.

Seeking to meet demand, some proponents have started breeding farms with hundreds or even thousands of toads. But Mr. Villa also warned that such sites could become vectors for outbreaks of chytrid fungus, a pathogen that can devastate amphibians. Predators could also target such locations, he said, as coyotes and Gila monsters have done in California in places where desert tortoises are raised. Reports of poaching are also worrying toad advocates.

In the meantime, a growing number of herpetologists and researchers of psychedelic drugs are citing studies that show the synthetic form, which is relatively easy to produce, has helped ease symptoms of depression, anxiety and stress.

Unlike other psychedelics such as peyote or ayahuasca, which are grounded in centuries of traditions involving Indigenous peoples, Bufo’s usage is thought to be more recent.

Pharmacologists had known the Sonoran desert toad could make 5-MeO-DMT, but it wasn’t until 1983 that Ken Nelson, a reclusive artist who lived in a decommissioned missile base in North Texas, drove to the Sonoran desert, milked a toad, dried the venom on his van’s windshield and smoked it.

A pamphlet he wrote under the pseudonym Albert Most then circulated in the underground scene of psychedelic enthusiasts.

“That might actually be the origin story,” said Alan Davis, director of Ohio State University’s Center for Psychedelic Drug Research and Education.

Still, some of the most influential figures in the Bufo scene have promoted Indigenous connections. Dr. Octavio Rettig, a physician from Guadalajara, Mexico, said he introduced the venom to the Seri people in northwestern Mexico in 2011 in a bid to combat crystal meth addiction.

“After they got the medicine, they started to put the puzzle together,” said Dr. Rettig, 43, citing what he believes was a rescue of the Seri’s “lost traditions.” “They recognized the benefits of the toad medicine.”

Bufo retreats are now available in the Seri community at which the actual venom of the toad is consumed. At the same time, others pushing for protections for the toad have argued that the promotion of Indigenous connections could have disastrous effects by further depleting toad populations.

“People hunger for the narrative that the toad was used ancestrally by the Indigenous people of Sonora,” said Ana Maria Ortiz, a doctoral student who is carrying out a population study of the toad at the University of Wisconsin’s School of Human Ecology. “There’s an appeal to that narrative, and even I believed it at the onset.”

Ms. Ortiz, who has used Bufo to help people overcome addictions, said she was aware that some users skeptical of the synthetic form describe an “entourage effect” involving other compounds in the toad’s natural secretions.

“A lot of the other compounds in the toxins are actually cardiac glycosides that can kill you,” Ms. Ortiz said. “Synthetic 5-MeO-DMT is just as good. People need to leave the toads alone.”

“Toad medicine is watching the movie in 3-D,” added Dr. Sandoval, who owns a ranch in Sonora, where he raises the toads and charges $500 for a venom ceremony.

Still, Dr. Sandoval said that relying on the toad involved risks. In one incident last summer, he said, intruders stole hundreds of adult toads from his ranch.

Quarreling around 5-MeO-DMT may just be starting as Bufo pioneers also face claims of abuse. Participants in a Facebook group have highlighted claims of psychological manipulation and rape against Dr. Sandoval; he has disputed them. Dr. Rettig has come under criticism over the deaths of people who have taken part in Bufo ceremonies.

Dr. Rettig acknowledged that deaths had occurred but pointed to other pre-existing health problems, like heart conditions.

“I am a physician,” said Dr. Rettig, who estimated that he had worked with thousands of people taking Bufo. “Only a madman can expect that no one will suffer any sideways consequence.”