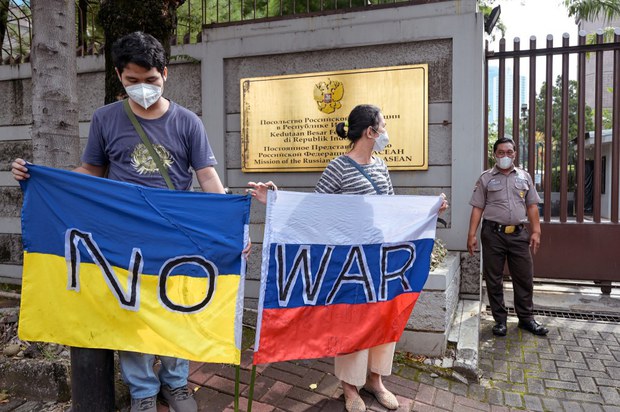 While some in Indonesia have condemned Russia’s invasion of Ukraine, many are voicing support for Moscow on social media, a phenomenon that one observer says is rooted in anti-Western sentiment and a love of “strong figures.”

Many in Muslim-majority Indonesia harbor a resentment over Western “silence” on the suffering of Palestinians and the close relationship between the United States and Israel, said Radityo Dharmaputra, a lecturer in Eastern European studies at Airlangga University in Surabaya.

“Because people are anti-West and anti-American, they think they must support Russia,” he said. “Our society favors strong figures.”

Some Indonesians see Russian President Vladimir Putin as a strong man who is challenging the West, much like Sukarno, Indonesia’s founding president, did in the 1950s and ’60s, according to Radityo.

Twitter threads in the Indonesian language justifying Russia’s invasion of Ukraine have been popular. Pro-Russian talking points trending on Twitter include Ukraine as a vassal state of the United States and Russia acting in the interest of its security.

Meanwhile, a message that went viral on WhatsApp likened the Russia-Ukraine conflict to a dispute between a divorced couple. It depicted Ukraine as a wealthy ex-wife with custody of the kids who hangs out with criminals and gangsters.

Before the war, Indonesians did not pay much attention to Russia-Ukraine tensions, and were more concerned about rising food prices, said Dudy Rudianto, the founder of Evello, a social media monitoring and analysis agency.

But interest in Indonesia has soared since the invasion began on Feb. 24. Nearly 100,000 news articles have been shared on social media, and videos showing Russian air strikes and bombardments have drawn more than 550 million views on YouTube and 72 million views on Instagram, Dudy said.

“Especially on Twitter, 22,000 accounts were involved in conversations [about the war], even bigger than those about the 2024 general elections,” he told BenarNews.

Russian and Ukrainian diplomats, in the meantime, have been wooing support from Indonesian Muslims.

“I really hope that NU, Yahya and all Indonesian Muslims can speak up, send prayers and help end this war to reduce the suffering of the Ukrainian people, including about 2 million Muslims in Ukraine,” Hamianin told reporters after the meeting.

A day later, Russian Ambassador Lyudmila Vorobieva made her own visit. Her country is home to a large Muslim population, she pointed out.

“We are very grateful to the leadership of NU for expressing their willingness to contribute to solving the situation and listening to the views of the Russian Federation,” she told reporters.

Yahya called on both sides to resolve the conflict through dialogue.

“Whatever the problem, no matter how complex it is, as human beings with reason we can definitely talk to each other to find a way out,” he said.

Meanwhile, Teuku Rezasyah, a foreign policy analyst at Padjadjaran University in Bandung, said the ambassadorial visits were a testament to NU’s influence.

“Their hope is that NU, being an organization with the largest following, can influence the Indonesian government … because Indonesian policies are heavily influenced by domestic forces,” he said.

Despite pro-Russian views circulating among Indonesians on social media, the country’s government voted for a U.N. resolution that condemned Moscow’s military strike on Ukraine. But, at the same time, Jakarta has not directly criticized Russia or used the word “invasion.”

After the invasion, President Joko “Jokowi” Widodo posted on Twitter – without referring to Russia or Ukraine: “Stop the war. War brings misery to mankind and puts the whole world at risk.”

Ukraine, for its part, last week urged Indonesia to include discussions on the invasion during the G20 summit in Bali in October. But Chinese foreign ministry spokesman Zhao Lijian urged Jakarta to stick to “the established agenda” instead.

“China supports Indonesia, the rotating president of G20, in promoting cooperation across the board in accordance with the established agenda under the theme of ‘Recover Together, Recover Stronger,’” Lijian said at a press conference in Beijing on March 15.

“The G20 was formed as a premier forum for economic issues,” he told BenarNews.

During the talks, Retno called for an early end to the Russian war in Ukraine and respect for “other countries’ sovereignty and territorial integrity,” it said.

Meanwhile, in a phone conversation on March 16, Jokowi and Chinese President Xi Jinping “agreed that all parties should stay committed to promoting talks for peace,” the Chinese foreign ministry said.