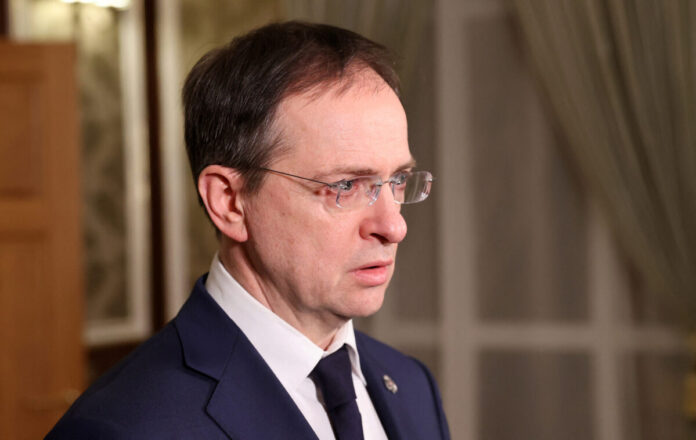 Russian and Ukraine negotiators are getting closer in their discussions, the head of the Russian delegation said on March 18.

Vladimir Medinsky described the talks as “halfway” to reaching a deal, according to state media outlets.

“The topic of neutral status and non-accession of Ukraine to NATO is one of the key issues of the negotiations. This is the issue on which the parties have brought their positions as close as possible,” Medinsky said. “Then details begin relating to what security guarantees Ukraine receives in addition to those already existing in case of its refusal to join the NATO bloc.”

Ukraine is not a member of NATO, but has in the past expressed hope that it would be allowed to join the alliance.

Ukrainian President Volodymyr Zelensky, though, said recently that his country must accept that it cannot join.

Russian and Ukrainian officials have been negotiating for peace since several days after Russia on Feb. 24 invaded its neighbor.

No ceasefire has been reached during the negotiations. Fighting has primarily taken place in or near Kyiv and in eastern Ukraine, where Russian speaking people for years have clashed with Ukrainian forces and others.

Just before the war started, Russia recognized parts of Ukraine’s east as independent.

Mikhailo Podolyak, a top Ukrainian negotiator, wrote on Twitter after talks held by video this week that Ukraine wants the total withdrawal of Russian troops in addition to security promises from various countries and a ceasefire.

Ukraine has increasingly pushed for direct talks between Zelensky and Russian President Vladimir Putin, a prospect to which the Russians have been reluctant to commit.

“My priorities during the negotiations are absolutely clear: the end of the war, guarantees of security, sovereignty, restoration of territorial integrity, real guarantees for our country, real protection for our country,” Zelensky told Ukrainians in a recent address.

Podolyak in an update Friday said Russian statements “are only their requesting positions,” adding: “All statements are intended, inter alia, to provoke tension in the media. Our positions are unchanged. Ceasefire, withdrawal of troops & strong security guarantees with concrete formulas.”

Putin, meanwhile, told German Chancellor Olaf Scholz earlier Friday that Ukraine was trying to stall peace talks and portrayed his government as prepared to continue negotiations to find “a solution in line with [our] well-known principled approaches.”

Speaking to a rally in Moscow after the call, Putin said the invasion was done “to end the suffering of people” in eastern Ukraine, reiterating his description of what was happening there as a genocide. “We have not had unity like this for a long time,” he added.