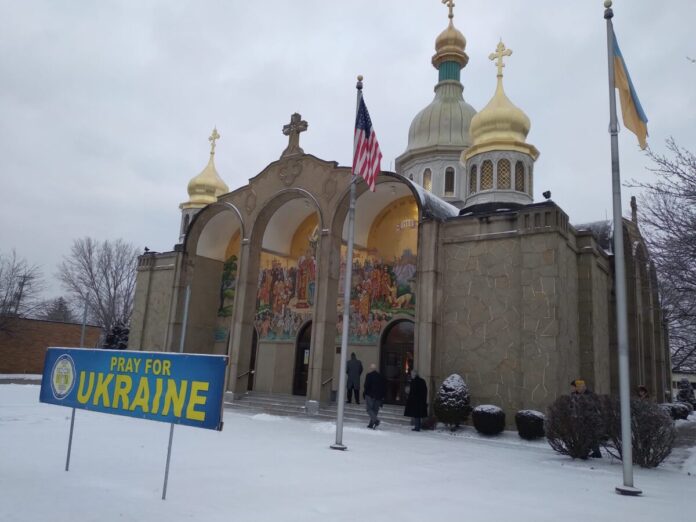 Ohio and its large Ukrainian community near Cleveland are ready to welcome refugees while numerous agencies on all levels of government—local, state, and federal—are preparing to help assimilate them into the American way of life.

Wearing a small blue-and-yellow ribbon—the colors of the Ukrainian flag—pinned on his suit jacket, Gov. Mike DeWine led the Ohio Ukrainian Summit, a forum for resettlement, housing, and job services groups on March 17.

The event was attended by about 200 people at the church’s Grand Hall in the Ukrainian Village section of Parma, Ohio, west of Cleveland.

Sponsored by Ohio Job and Family Services, the summit included about 10 other speakers. It was somewhat of a welcoming launch and a unified showing of Ohioans’ continued support of Ukraine and forthcoming refugees who already are quietly arriving in northeast Ohio.

The purpose of the summit was to provide an opportunity for resettlement and social services groups such as Cleveland Catholic Charities, the United Ukrainian Organizations of Ohio, and Global Cleveland to have a comprehensive forum.

Many directors and managers from those agencies explained their roles in how they can best help refugees adjust to their new life through housing, helping them find work, and seeking education options for their children.

Admitting that he only knows what’s happening in Ukraine from watching television news, DeWine said from the podium, “I don’t know when, and if we’ll get refugees, but it seems like we need to get ready. I think this is an appropriate time and place.”

Currently, there’s been about 20 Ukrainian refugees arriving around northeast Ohio, including a woman and her 10-year-old child who arrived in the west Cleveland suburb of Brook Park on March 17, according to Joe Cimperman, president of Global Cleveland.

Global Cleveland is a nonprofit economic development group focused on assisting immigrants, refugees, and other newcomers to the city who are fleeing dangerous countries or persecution.

Thousands of Ukrainians are continuing to leave their homeland in the face of Russia’s invasion of Ukraine. Those who spoke during the summit called for the federal government to provide unrestricted visas to the refugees so they could stay as long as they need.

Once the refugees arrive in the United States, they would automatically become legal residents, but the types of visas they would be granted currently are uncertain.

Under legal resident status, they would be eligible for the same government assistance and benefits for up to eight months. However, the goal of the agencies is to make refugees self-sufficient as soon as possible.

“This is just the start,” Hontaruk told The Epoch Times. “We’ll have to see how the U.S. handles visas for refugees. They are going to need to find living arrangements for their families and schooling for their children. Coming here is a big step.”

According to the United Nations, at least 1,900 civilian casualties have been reported, including 726 killed, though the UN says that actual numbers are likely much higher. Nearly 5 million people have been forcibly displaced. At least 3 million Ukrainians have fled to nearby countries,

Ukrainians are painting the words zhinky (women) and deety (children) on the rooftops of various buildings throughout parts of the country indicating women and children are inside, but the Russian military keeps bombing them anyway.

“Putin is waging a barbaric, brutal, and unjustified war,” DeWine told the audience.

“This is a tragedy … It is just so horrible and barbaric, it breaks our heart.”

“We all can join together to urge our president to send all the military support we can including fighter jets so the people of Ukraine can fight back,” DeWine added.

Alenka Jerak, Consul General of the Republic of Slovenia’s Office in Cleveland, also was in attendance.

Jerak told The Epoch Times that the prime ministers of Slovenia, the Czech Republic, and Poland recently visited with Zelensky in Ukraine.

“President Zelensky is doing all right,” Jerak said. “Everybody is proceeding with caution against Russia because they are afraid another stage of this will start World War III. In the meantime, Russia is proceeding with killing more people.”

First and foremost, DeWine said that Ohio will welcome the arrival of Ukrainian refugees.

“Let’s make this clear, Ukrainian refugees are welcome here in Ohio,” DeWine said. “Ohio stands with Ukraine as the world does. We are a nation of immigrants. Ohio’s success was built by Eastern European immigrants.

“Cleveland is a hub of Eastern European immigrants,” Cimperman said. “Let them come here. We’ve brought refugees here before, and we can do it again. Let’s provide them unrestricted visas and not have to make them jump through the hoops to stay here.”

“Everybody wants to go back home,” said Cimperman, whose Slovenian mother left Yugoslavia under its Communistic government. “Right now, Ukrainians aren’t sure whether they’ll have a home to go back to. It would be good to make it as nice as we can for them while they’re here.”

Ukrainian Village is home to five churches, numerous delis, and businesses buzzing with the native language, and is one of the largest Ukrainian communities in the United States.

Overall, there are about 4,000 people of Ukrainian descent living in Parma, and thousands throughout northeast Ohio, according to the 2020 U.S. Census.

In late August, the local community hosts an Independence Day parade along State Road in Parma.

Although Parma’s Mayor Tim Degeeter was not one of the speakers, he also was in attendance at the forum. He has been a strong advocate for the Ukrainian community.

“This hits home for us because Parma is Ukraine,” DeGeter told The Epoch Times. “We think Parma is a natural for Ukrainian refugees. It’s embedded here. Since Putin’s illegal invasion, we stand with Ukraine. It’s great that Ohio has banned all Russian liquor and products from being sold here.”

The Ohio Dept. of Job and Family Service’s Refugee Services Program works with local resettlement agencies to determine the capacity of a given area to handle an influx of refugees. In addition to the initial processing and screening of refugees, the federal government provides funding to states, which is then administered by agencies on the local level.

More recently, northeast Ohio has taken in about 400 Afghanis since October, about two months after the fall of Afghanistan. Overall, there’s been about 80,000 Afghani refugees come to the United States with the help of a $6 billion aid package from the Biden administration, Darren T. Hamm, director of the U.S. Committee for Refugees and Immigrants told The Epoch Times.

“I don’t think anyone envisioned what we could be facing six weeks after the fall of Afghanistan,” Hamm said. “Sometimes with all the processing of paperwork, we did more work in a week than we sometimes did in a year.”

“Compare the numbers of Ukrainians leaving their country to Afghanistan’s,” Hamm added. “We need to keep every avenue opened and accept kindness when it’s granted.”

Michael Sakal is an Epoch Times reporter who covers the state of Ohio.