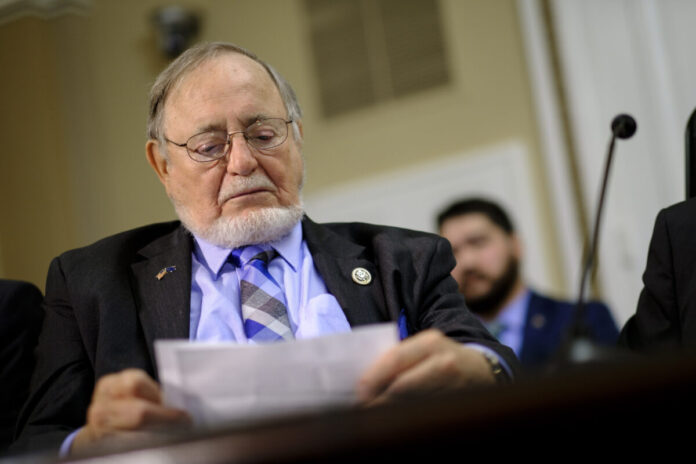 Young died while traveling from Washington to Alaska with his wife Anne, the congressman’s office said.

Young “passed away today while traveling home to Alaska to be with the state and people that he loved,” the office said in a statement.

Young’s cause of death has not been made public.

The longtime congressman was flying from Los Angeles to Seattle when he could not be resuscitated, Jack Ferguson, his former chief of staff, told the Alaska Daily News.

“Everyone’s learning about it right at the moment. The phone’s ringing off the hook,” Ferguson said. “I’m sad to lose such a good friend, and a person that I’ve known all his political career.”

Young, born on June 9, 1933, had served the longest continuous term among the current members of Congress before he died. He entered office in 1973 after winning a special election to fill a seat left open by a sudden death.

Young was the dean of the House of Representatives prior to his death because of the decades he had served.

Young was born in California but moved to Alaska after graduating from college with a teaching degree and serving in the U.S. Army. He settled in Fort Yukon, initially working at construction, fishing, and looking for gold. He took a teaching job at a Bureau of Indian Affairs school and met and married a bookkeeper named Lu.  They have two children and 14 grandchildren. She died in 2009. Young remarried in 2015.

Young had been running for another term in office before he passed away. Members of the House must win re-election every two years.

Young won the 2020 election with about 54 percent of the vote, trumping challenger Alyse Galvin. The results were similar to the 2018 election.

“Don Young’s legacy as a fighter for the state will live on, as will his fundamental goodness and his honor. We will miss him dearly. His family, his staff, and his many friends ask Alaskans for their prayers during this difficult time,” Young’s office said.

Condolences poured in from colleagues after the death was announced.

Rep. Suzan DelBene (D-Wash.) called Young “a powerful voice for Alaska and the Pacific Northwest” while Rep Tom Rice (R-S.C.) said Young was “a good man” who “knew how to get things done.”

“So sad to hear of my friend Don Young passing today. He was a great man and a great friend. I have so many Don Young stories, like anyone who knew him. The House will not be the same without him. My prayers are with Anne and his family,” Rep. Rodney Davis (R-Ill.) added.