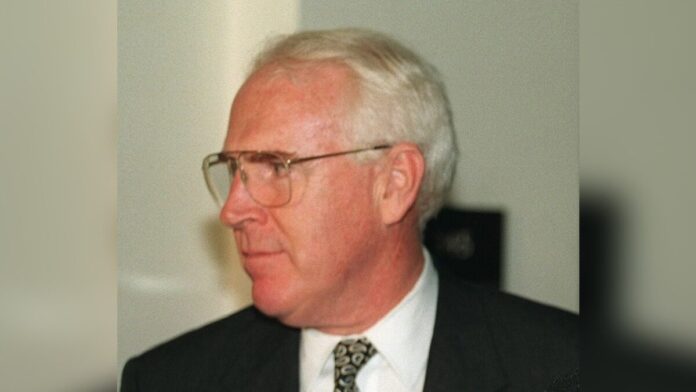 By Kate Ackley
From CQ-Roll Call

WASHINGTON—Former Rep. Vic Fazio, a California Democrat who served 10 terms in the House and then went on to a high-profile lobbying career, died this week at the age of 79. He had been suffering from cancer and died at home surrounded by family, his office said in a statement.

The House observed a moment of silence in his memory Thursday, and Speaker Nancy Pelosi said in a statement she will miss her friend and fellow Northern Californian.

“During his two decades in the House, Congressman Vic Fazio was a respected Member: leading masterfully within our Caucus, working devotedly to strengthen our beloved institution and fighting relentlessly for his Sacramento community,” Pelosi said.

Fazio first won election to the House in 1978 and rose to become Democratic Caucus chairman. He led the Democratic Congressional Campaign Committee for four years in the 1990s, including the 1993–94 cycle, when Republicans won control of the chamber. He did not seek an 11th term in 1998 and instead took up a K Street career, first at Clark & Weinstock and later at Akin Gump Strauss Hauer & Feld, one of the city’s largest lobbying practices.

“Vic Fazio is without a doubt one of the kindest, finest gentlemen I’ve ever known in politics or elsewhere,” said former New York GOP Rep. Bill Paxon, who chaired the National Republican Congressional Committee in the 1994 cycle and later worked with Fazio at Akin Gump.

Paxon said that despite being engaged in “mortal political combat” during the 1994 elections, the two lawmakers struck up a friendship.

“He was defending his majority, and I was trying to take it away,” Paxon recalled in a phone interview Thursday. “We were able to put the campaigns aside and talk about our lives, our families, every element of our friendship.”

In Congress, Fazio served on the Appropriations Committee and kept a sharp lookout for ways that his district and state could tap into the flow of federal dollars. In the 104th Congress, he pushed through an amendment to the Fiscal 1997 energy and water development spending bill to increase funding for solar and renewable energy research by $10 million, with $6 million for wind energy research, a favorite in California.

He was also a member of the Armed Services, Budget, Ethics and House Administration committees. He worked to secure more than 3,000 acres in federal lands to protect northern California’s wetlands, now the Vic Fazio Yolo Wildlife Area.

Paxon said he used to kid Fazio that his kind nature was the result of his Northeastern upbringing. Fazio—born Oct. 11, 1942, in Winchester, Mass.—was raised and educated in the East and moved to California as a journalist, covering and then working for the state Assembly. He won a seat in that body in a 1975 special election and was reelected easily in 1976. In 1978, he was the only Democrat ready to run for Congress when his area’s beleaguered Democratic incumbent, Robert Leggett, suddenly retired. His Republican foe was a former Ronald Reagan aide who ran well in rural areas, but Fazio claimed the seat with 55 percent of the vote.

“I am not the only Member of Congress who turned to Vic over the years for advice, always receiving wise counsel and helpful insights. I will miss our conversations,” Hoyer said in a statement.

Fazio took a keen interest in the workings of Congress and the conditions for staff. One former aide said Fazio offered parental leave in his congressional office when such a policy was a rarity. And long after leaving Capitol Hill, he urged lawmakers to increase staff pay, especially to recruit and retain committee aides.

“Now people have to leave to go downtown to earn more money,” Fazio testified in 2019 to the Select Committee on the Modernization of Congress.

It was a career path he was familiar with.

Fazio represented a long roster of clients during his two decades on K Street, including Amazon, AT&T, the Gila River Indian Community, the California Association of Physician Groups, Burger King Corp. and the Coalition for 21st Century Patent Reform.

Paxon and Fazio left the Hill at the same time, after the 1998 elections. Paxon said he tried to get Fazio to join him in setting up their own lobbying business. Paxon drew up a business plan. “But for a variety of family reasons, he just didn’t feel the time was right,” Paxon said. “After a hectic life in politics, he didn’t want to go into the position of starting a business and all that entails. While I was disappointed, I certainly understood it.”

Paxon joined Akin Gump, but even though the company tried to recruit Fazio, he opted for Clark & Weinstock, recalled Joel Jankowsky, who led the lobbying practice at Akin Gump for years.

Fazio eventually made a switch. “Joel Jankowsky did a masterful job on the business side, and I worked on the personal side, and ultimately he joined us,” Paxon said.

“Vic was a major contributor to the success not only of the policy group but also the firm as a whole,” Jankowsky said during a phone interview Thursday. “He was hard working, diligent, extremely knowledgeable about the intricacies of government. … He was a great mentor in the firm, throughout his life, and he certainly took many young colleagues under his wing.”

During his tenure on K Street, Fazio remained a partisan and was frequently among the top lobbyist donors. “With me, it’s always a matter of the good causes that come along that may make you do one more,” Fazio told Roll Call in 2014 about his copious political donations.

Fellow Democratic lobbyist Steve Elmendorf, who worked with Fazio at the DCCC and when he was caucus chairman, recalled that “there was no member who worked harder and was better liked on both sides of the aisle.” Fazio also “got a lot done for his district and his members,” Elmendorf said.

Akin Gump chairperson Kim Koopersmith said in a statement: “Vic was not only extremely well informed on the workings of Capitol Hill, Washington politics, and, as a former California assemblyman, state-level politics, he was also warm, funny, and generous.”

Jankowsky recruited Fazio to serve on the board of the Prevent Cancer Foundation. It was before Fazio’s own diagnosis, but his family had a sad history with the disease. His daughter, Anne Fazio, had been diagnosed as a teenager with leukemia. She died at age 22 in 1996 from complications related to pneumonia, after having graduated from the University of California,Davis.

“He had great insights into the workings of government and brought all of those attributes to the foundation,” Jankowsky said. “His illness really underscores the mission of the foundation.”

“He’s also like family to a lot of us,” she said. “Both sides of the aisle, everybody loved him.”

Fazio is survived by his wife, Kathy Sawyer, who he married in 2017, a daughter, stepchildren and grandchildren. His wife, Judy Fazio, died in 2015.

A memorial service is being arranged.