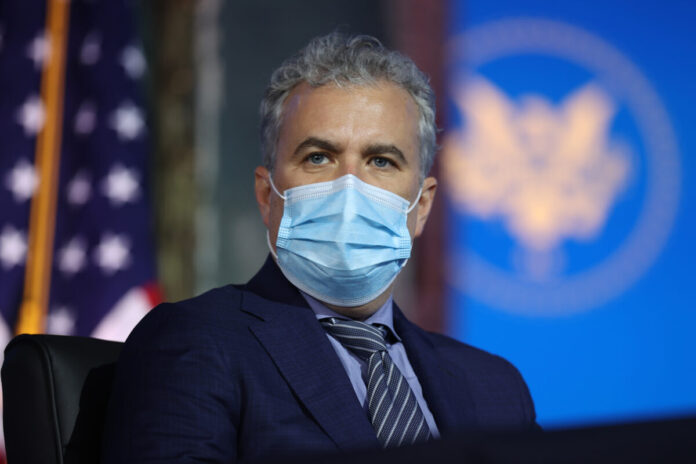 The White House announced Thursday its coronavirus response coordinator Jeff Zients is stepping down after managing the federal response to the spread of the CCP (Chinese Communist Party) virus for more than a year, which included coordinating the largest-ever government distribution of vaccines.

In a statement, President Joe Biden announced that Zients will be replaced by the dean of the Brown University School of Public Health, Dr. Ashish Jha, to lead what the White House has characterized as “a new moment” in its fight against the virus.

Zients will leave the role next month and return to private life.

Biden praised Zients as a “man of service and an expert manager” adding that he will “miss his counsel and [is] grateful for his service.” Biden touted Zients’s role in the federal effort to vaccinate 80 percent of American adults, reopen schools, and distribute at-home COVID tests.

“Thanks to all the progress we’ve made, Americans are safely moving back to more normal routines, using the effective new tools we have to enable us to reduce severe COVID cases and make workplaces and schools safer,” Biden said. “But our work in combatting COVID is far from done.”

Critics of the Biden administration’s virus response have pointed to confusing messaging and ever-changing recommendations from public health officials on how Americans should adjust their lives with respect to COVID-19, the disease caused by the CCP virus.

Biden says he’s “excited” to name Jha as the new White House COVID-19 Response Coordinator, touting him as a “leading public health expert in America” with a “wise and calming public presence.”

In his statement, Jha made a promise to the American people to be “straightforward and clear in sharing what we know, in explaining what we don’t know and how we will learn more, and what the future will ask of all of us.”

The change in leadership comes as the White House is making the case to Congress to approve more funding to fight the virus. The Biden administration called for $22.5 billion in new funding that was negotiated down and then ultimately left out of the omnibus spending bill approved by Congress on March 11.

White House press secretary Jen Psaki told reporters Tuesday that absent the new funding, fewer monoclonal antibodies will be sent to states, the federal government will not be able to purchase additional treatments and tests, surveillance for future variants will be limited, and it may create a shortage of vaccines.

“Waiting to provide funding until we’re in a worse spot with the virus will be too late,” Psaki said. “We need funding now, so we’re prepared for whatever comes.”

Zients and his team released the latest national COVID-19 strategy earlier this month that made calls for new funding and outlined plans to fight the virus while people return to their “normal routines” after two years of varying degrees of federal restrictions. The 90-page National COVID-19 Preparedness Plan seeks to drive limit serious illness and deaths from the virus and prepare for potential new variants while keeping schools and businesses open.

The number of new coronavirus deaths reported worldwide fell by 17 percent from the previous week as of March 15, while COVID-19 infections rose, according to the World Health Organization.

Before his service in the Biden administration, Zients served as vice-chair of Biden’s transition. In the Obama administration, he was the director of the National Economic Council, acting director of the Office of Management and Budget, and led the effort to fix HealthCare.gov after its disastrous rollout in 2013. He was also a top executive at the Advisory Board Company.